As I looked at my weather forecast App on the morning of Sunday, February 27, I was dismayed to note it showed constant rain for the next four days. Unfortunately, these were precisely the four days I and five friends, all in our late 60s, had planned to fulfil our common desire to hike the infamous Yam le Yam trail, a cross-country hike from the Mediterranean Sea to the Sea of Galilee.

That Sunday evening, arriving by train from our respective towns of Netanya, Raanana, Givat Olga, Gedera, and Kfar Tavor, we six friends convened in Nahariya, the northernmost coastal city of Israel. 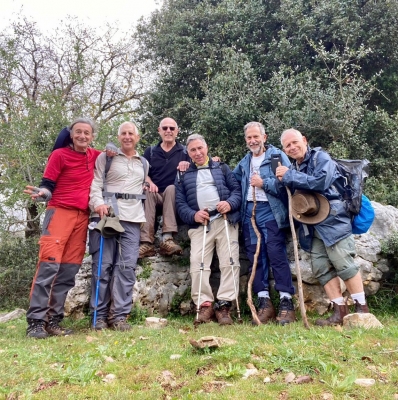 Up early the following morning, we headed north to Achziv Beach and as custom dictates started our adventure by touching the Mediterranean. 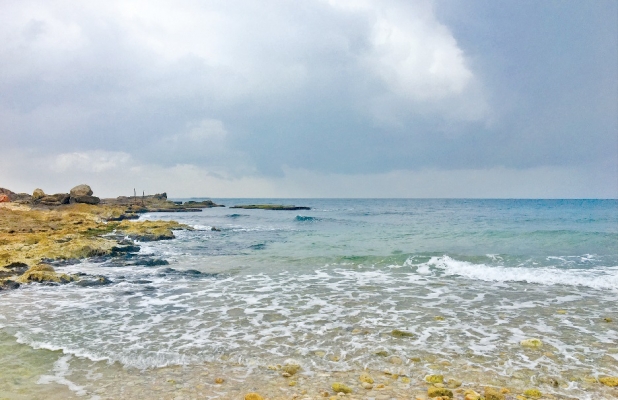 Moving over to a memorial at Gesher Haziv on the other side of the road, I regaled my fellow travellers with the story of the Night of the Bridges – the night of June 16-17, 1946, when, in response to the British White Paper limiting Jewish immigration, the Palmach decided to blow up eleven railway bridges throughout Palestine. While ten bridges were successfully blown up that night, an ambush was set here at Achziv and a powder keg blew up killing 14 members of the Palmach.

As a tour guide it was to be my role to guide at appropriate points of interest we passed. In fact, each of us took on unofficial roles. Ian was to be map reader and leader, Jamie and Garry the photographers, Garry head cook, David the voice of reason and Lawrence, with his particular sense of humour, the morale booster. 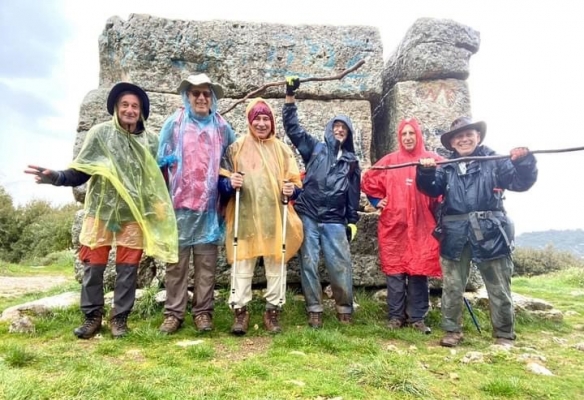 The gang in waterproof gear

Just as I was giving my spiel at the Memorial to the 14, the rain started, exactly as forecast. Not just a light drizzle, but a real downpour which was to last all day.

Undeterred we set out passing under the very bridge the Palmach had failed to blow up on that fateful night.

Passing fields of bananas and avocadoes belonging to Kibbutz Hanita, we reached the Kziv Stream Nature Reserve. Following the route of the Yam le Yam trail we had to cross the Kziv Stream many times. We forded the swollen stream, initially trying not to get our feet too wet by gingerly stepping on stones. However, after slipping in the water and getting totally soaked several times we soon abandoned all hope and started simply wading straight across the raging torrents.

Taking shelter where we could, Ian brewed coffee and we ate lunch. Soggy sandwiches accompanied by a constant drip of rain down the back of the neck.

We passed the remains of a ruined Crusader sugar factory at Khirbet Manot. The Crusaders encountered sugar cane in the Holy Land and were soon the first to realise the value of the sugar manufactured from the cane and started exporting it back to Europe. 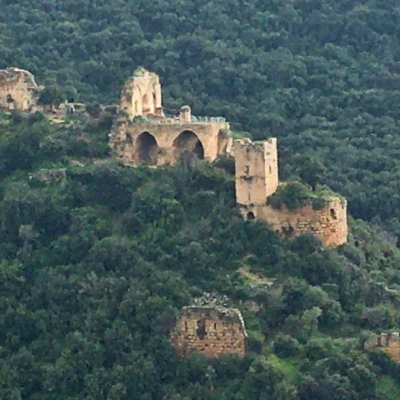 Montfort Fortress as seen from Goren

We eventually arrived at the Montfort Fortress towering high above us. Climbing out of the Nahal to Goren Park we could look out over the other side of the Nahal, to the magical sight that is Montfort. A brief history of the 12th Century Crusader farm turned fortress was provided and from there we walked on to Moshav Goren where we stayed the night.

Once installed in our accommodation the lounge came to resemble a Chinese laundry with the sodden clothes of all six of us, hanging out to dry. A quick visit to the local grocery store and a very grateful supper of Shakshuka and pasta was quickly prepared by Garry and enjoyed by all.

An equally early start the next day saw us leave Goren. Whilst most of our clothes had dried out overnight it was a singularly unpleasant experience putting on wet boots.

Retracing our steps to the Kziv Stream Nature Reserve, but keeping to the bank, we were blessed with an unexpectedly bright morning. En-route we were befriended by a local dog who started walking with us. We adopted him and nicknamed him 'Scout' as he led us for the whole of that day. We followed the famous green trail passing by several Arab villages and through the Abirim Fort Nature Reserve which extends along the banks of the Sarakh Stream. While there was little of guiding interest, there were many ups and downs, and many wild spring flowers to be seen among the Mediterranean vegetation, so indicative of the Galilee. There was a profusion of red anemones, cyclamen, orchids, and lupins.

The weather had held up all day.

We passed Tzuriel, a hilltop Moshav established in 1949 by Yemenite Jews and named for the biblical figure of Zuriel, son of Abihail (Numbers 3:35), before reaching the entrance to the Druze village of Hurfeish where we were to stay the night. According to tradition, Sabalan, a Druze prophet, practiced and taught his religion over the site of a cave in Hurfeish. The site now houses the shrine of Nebi Sabalan. There in Hurfeish we enjoyed the hospitality of Safi who treated us to a Druze dinner of mujadara (lentils and rice) with a variety of other rice, vine leaves, and beautiful salads.

We arose on the third day to a table groaning with a beautiful Druze breakfast of flat thin pitta, salad, falafel, and a selection of cheeses.

Once again, the weather seemed to defy the forecast, as we set out for Har Meron. We climbed Meron, which at 1,208 m above sea level, is the highest mountain west of the Jordan River. As we climbed, we passed through the vegetation which comprises a natural brush, unique in that it is not planted, a mixture of yellow flowering broom and a plenitude of indigenous oak (Alon) and terebinth (Ela) trees, as well as the more unusual K'tlav (strawberry tree). 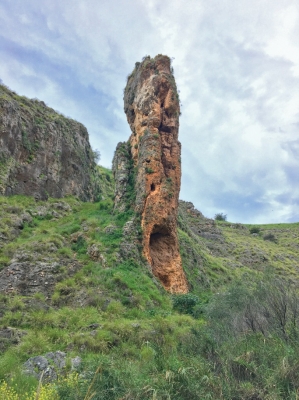 The Pillar at Nahal Amud

It was surprisingly cold at the top and we circled the summit amidst swirling mists but were more than compensated by the magnificent views that stretched out before us in all directions. Descending the other side of Har Meron it unfortunately started raining again. We walked past the tomb of Shimon Bar Yochai and the ancient synagogue at Meron, arriving at the upper reaches of Nahal Amud within the Amud Stream Nature Reserve. Walking alongside the stream we were once again dazzled by the profusion of spring blooms. We stopped at the Pools of Sekhvi, where the Amud Stream meets the Sekhvi Stream, for a well-earned rest only then to be faced with a steep climb up to Tzfat. The end of a long hard day.

As if by magic, a taxi was conveniently waiting for us at the top and took us to our overnight stop in the Old City. Tired out by the day's long hike we settled for a carry out pizza and were all in bed by 8pm.

The fourth and final day saw a great improvement in the weather as we set out to conquer the last challenge of our Yam le Yam tiyul – Nahal Amud. Due to the excessive rain of the previous few days we were advised by the Park Ranger to forego Upper Nahal Amud which is treacherous when wet and instead head for Lower Nahal Amud. So, back to the Amud Stream Nature Reserve we started our long hike along the stony riverbed. Although the going was slow and treacherous due to the ground still being wet and muddy, we were once again compensated by the magnificence of the cliffs on either side covered with the yellows, reds and whites of Spring. Passing the pillar of rock after which Nahal Amud is named I regaled my fellow hikers with stories of the prehistoric finds in the overhead caves by a fellow Scot, Francis Turville-Petre, who initiated prehistoric research in the land of Israel with his discovery in 1925 of a fossilised skull in Zuttiyeh Cave. Initially thought to have been Neanderthal, it is now housed in the Rockefeller Museum in Jerusalem. 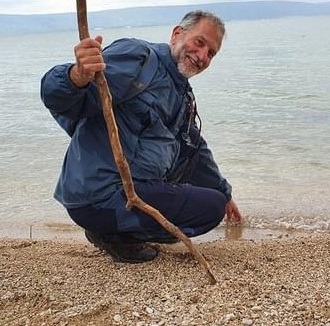 At the trail end David stretches out to touch the Kineret

As we exited Nahal Amud we were approaching the end of our hike. With mixed emotions we followed the road down to Hukok Beach at the edge of the Sea of Galilee. As we stretched out to touch the water of the Kinneret with weary limbs, a wave of personal achievement and euphoria swept over us.

Grateful thanks to my five fellow hikers – Lawrence Bertfield, Garry Bregman, Ian Goodriche, David Raffel, and Jamie Aaron Shapiro for the laughs, exhortations and simply making it all possible. 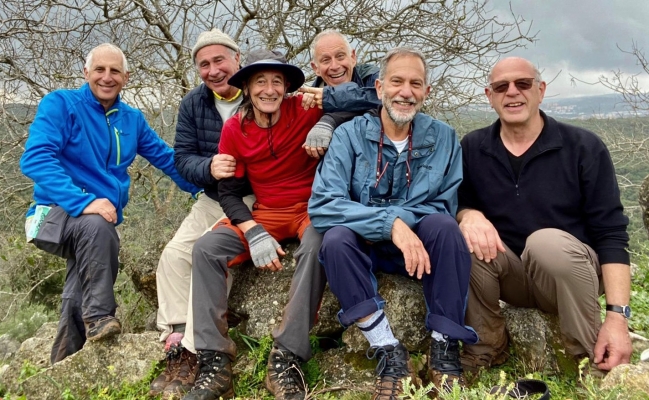