Past Prevails in Indonesia

Indonesia is one of the most fascinating countries I have visited.

A country where one can enjoy luxurious hotels that will make every tourist think he is in paradise, stunning views of rice fields fanned by Cocos palms, emerald lagoons, a huge variety of fauna and flora, a beautiful underwater world full of colorful coral and fish, and endless other exotic and beautiful sights.

In contrast to all this, there is a lot of poverty and in some places cultures that still expose views from many centuries ago.

The island of Sulawesi is a prime example of the country's thrilling population diversity. This island is "home" to an ethnic group called Toraja.

The three elements that make Tana Toraja so fascinating are the bizarre boat-shaped house styles, the extraordinary, elaborate funeral ceremonies, and the unique manner of burial of the dead.

After an 8-hour drive from the airport, I arrived in the Toraja district which is located in the center of Sulawesi Island. En-route, we passed lush green landscape of rice paddies adorned by coconut palms and villages with houses which resemble ships on stilts.

It is not known what the reason for the construction of these houses is, but there is no doubt, seeing these beautifully different houses in every corner of Tana Toraja creates a sense of 'high' for the eyes and for the mind. But, the houses are just the start. The most interesting in Tana Toraja are the buffalo market and the funerals. 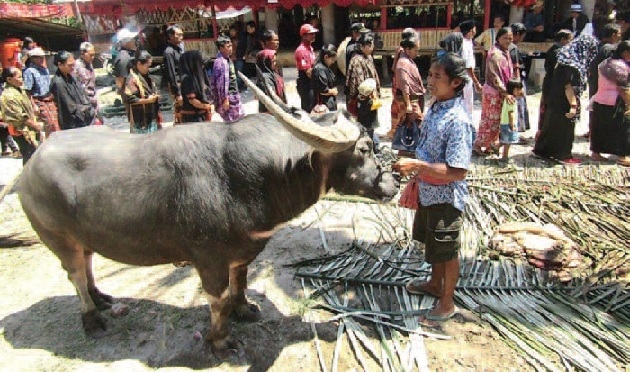 Water buffalo intended to be sacrificed

The town where I accommodated held a market day. This is a wandering market that takes place once a week between the towns of the region. A big bustling market, where you can find everything—vegetables, fruit, clothes, housewares and souvenirs—but, the most interesting part is the cattle market which focuses on the trade of buffalo and pigs.

Buffalo play an important role in the myths and legends of this ethnic group and is a central part of the local culture. Besides being a key factor in daily life, plowing the rice fields, providing milk, and serving as a freight animal, the buffalo is also a major factor in the funeral procession.

The cattle market was held in a huge open place to which hundreds of buffaloes and pigs of all sizes and ages were bought. The buffalo were tied with a string through their nose and the poor pigs lay on the ground tied with ropes to bamboo poles, ready to be carried home as a parcel.

The merchants check the animal meticulously, especially those which are meant to be sacrificed at the days of the funeral. The Torajans believe that the path from the living world to the aftermath is long and dangerous that is why they choose the buffalo—which is a powerful animal—to accompany and carry the spirit of the dead to the path of heaven. The more animals that are slaughtered, the safer the passage, is the belief.

The most precious and expensive buffalo is the albino whom they believe is special; as such it is the most desired and the price may vary between $50,000 to $ 70,000, an astronomical sum in terms of the people in that area. A large-sized buffalo with extra-large horns is also considered prestigious and priced accordingly. 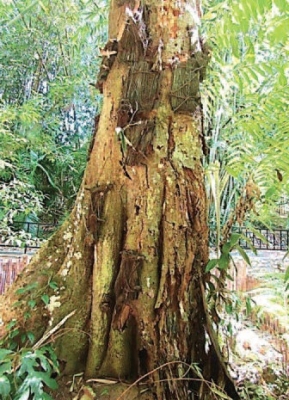 Originally, the Torajans used to follow Animism However, over the course of many centuries, they embraced Christianity, but kept their Animist beliefs close by.

Extravagant funeral ceremonies are a social and religious necessity in this Christian-Animist society because families must impress the gods with the importance of the dead. If not, the soul of the dead person may not be able to enter heaven and will walk the earth instead, causing trouble for the relatives. The wealthier and higher status they had in life, the more spectacular will be their funeral,

For the Torajans, life very much revolves around death, but not in a morbid sense. For them, a funeral is a great celebration of life, much like a going-away party, and is an occasion in which the entire family of the deceased, all the members of the village and those around take part and contribute their bit for the funeral. Like helping in building the funeral house or taking care of the event management. Others may bring in pigs and buffaloes for sacrificing and some orchestrate the music and the traditional dancing. Strangers and tourists are also welcome, and I found myself lucky to attend this special event. As a present, I was asked to bring a carton of qualified cigarettes.

It was not easy to find the place where the ceremony was to take place as there is no official announcement. The rumor goes from mouth to ear and my guide made an effort to find the small remote village within the vast expanse. We drove on bumpy dirt roads among the rice fields and occasionally asked the villagers.

The ceremony was held in the village's main square (the place is rented out to the family), where they built a traditional house (with a roof that looks like an inverted boat) that serves as a funeral home and wherein the dead body is placed in a decorated coffin.

The funeral service is not a sad event because by their faith, death is not the end but a gradual move of the soul to the next world. People were smiling and laughing during the ceremony and there were musical performances and dance in honor of the dead. 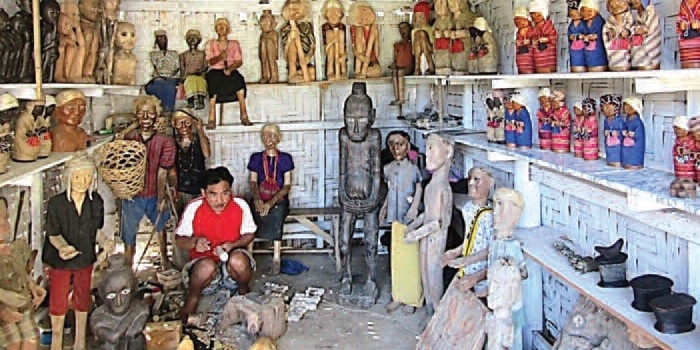 The Tau Tau carver at work

During the feast days of the funeral many buffaloes and pigs are slaughtered in a slow and painful process. Once dead, all of these end up at the funeral kitchen for a grand feast.

At the end of the ceremony (which can last many days), the coffin with the body is lowered from the funeral house and is then transferred in a procession through the village and the fields to the burial site.

The Toraja people do not bury their dead in the ground, but place them in tombs dug into cliffs or hang the caskets on the cliffs. The rich will be hung higher—closer to heaven—while the tombs of the poor often rest directly on the ground or will be placed in caves. After the burial, they leave an effigy (wooden doll in the image of the death person) to guard the body.

The babies are buried in trees.

The horns of the buffalo, which were sacrificed, are collected and hung on the central pillar of the traditional Tongkonan house. The more horns that are hung on the house, the higher the status of the family.

Although, the extravagant Tana Toraja funerals are a financial disaster for the families concerned, they play a great part in stabilizing and preserving Indonesia's Toraja society. The event gives everyone a chance to meet, talk and gossip in a relaxed atmosphere, while at the same time giving the dead person a rousing send-off and a guaranteed heavenly after-life. Long live Death in Toraja!

With so much emphasis on death rites, it is easy to forget that the Tana Toraja highlands has many other extremely worthwhile attractions. The entire region is simply gorgeous – picture valleys of terraced rice fields nestled between jungle clad mountains, gurgling rivers, waterfalls, quaint rural villages with their eye catching Tongkonan traditional house and friendly locals.
Tags:
Editor's Choice
PRINT