Israel's baseball team won the hearts of a nation, as the entire country followed its fortunes at the Tokyo Olympics. The blue-and-white squad played well, earning the respect of the teams they faced as well as baseball mavens around the globe. Israel had previously shocked the world by getting to the Games, having won four consecutive tournaments in June 2019 to earn its Olympic berth. Israel was the penultimate underdog, ranked 24 in the world, whereas the other five teams in Tokyo were all among the top seven.

Team Israel arrived in Japan intent on proving this was no fluke. It set its sights on a medal, not content on having already made history by being the first team to represent Israel in any ball sport in 45 years.

The Israeli nine came agonizingly close to reaching its goal. Despite losing ace pitcher Jon Moscot to a career-ending injury only nine pitches into its opening game, Israel battled each opponent every step of the way, bowing out after a heartbreaking 9th inning defeat to eventual Bronze medalist Dominican Republic. After dropping its first two games (to third-ranked Korea and the USA), Israel found itself in a do-or-die game against Mexico where the loser would make an early exit from the Olympics. Israel responded by routing world No. 5 Mexico. Two days later Israel was just three outs away from reaching the medal round with a near-upset of seventh-ranked Dominican Republic.

"We played our hearts out and showed the world Israel can play ball," said catcher Ryan Lavarnway after the loss to the Dominicans. "We proved we could have beaten any team on any day. So, we're disappointed but also very proud. We're going home with our heads held high. We had third-ranked [and previous Olympic gold medalist] Korea on the ropes in the opener and could have ended up 3-2 for the tournament, on our way to playing for the gold."

Four-time All-Star Ian Kinsler, who's no stranger to big games and, like Lavarnway, has a World Series ring to prove it, reflected on what it meant to be an Olympian. "This doesn't compare with anything. The high intensity you feel in every game, where each at bat, every pitch means so much – nothing compares with it!" Kinsler and Lavarnway are among the American Jews who've made aliyah to reinforce a growing cadre of Sabras who've grown up playing baseball locally and honed their skills in the Israel Association of Baseball's academy. They share a passion for helping to grow the game in Israel.

"We're here representing the country, our family heritage," said Kinsler. "People watched and were inspired. I'd love to build on this and help build more fields so kids in Israel can get out there and feel the joy of playing for the love of the game."

Former Major Leaguer Danny Valencia was animated describing the bonding among teammates. "It was an awesome experience: laughing with the guys, getting to know the young Sabra players, and being a role model for them so they could improve professionally.

My social media exploded with people from Israel and around the world who want to be a part of it. We have a slogan, 'Be the 25th man,' which allows everyone to feel part of our team. I'll never forget this."

For Valencia, like Kinsler, this will probably be the last time he laces up his cleats competitively. He performed at the highest level, hit three dingers in five games, every one coming during a crucial at bat. "When you do that," he said, "it energizes your teammates, especially the younger guys, and gains the respect of the other teams."

Catcher Tal Erel is one of these younger Sabras who seized every opportunity to learn from his elders, especially from Lavarnway and Nick Rickles, who are both a joy to watch behind the plate. "It's not easy to lose," he said, "especially such heartbreaking defeats – but if one must fall, it should be as part of such a great team. We showed what we can do. Hopefully, in future tournaments, I can lead others by sharing my experience with them."

Assaf Lowengart was Israel's youngest team member. Like Erel, he grew up playing locally, attending the Israel Association of Baseball's academy, and representing the country in international competition before doing his army service. He was awed to play alongside and even serve as a defensive replacement for baseball icons like Kinsler. Lowengart got into three of the five games, making several good plays in the field, and even swinging a bat in Olympic competition. "For me to learn from these legends, and then go out and do it in a real game – it's hard to express my emotions. But what really did it for me was seeing Shlomo Lipetz take the mound. Shlomo is the dean of all Israeli ballplayers, having represented the country since his days in youth ball until now when he's in his forties. My heart was riding on every pitch and rejoiced with every out he recorded."

General manager Peter Kurz loved the interaction between Israel's young players and men nearing the end of their playing days. It was part of his vision for Israeli baseball. "We dared dream," said Kurz. "Five years ago, ESPN laughed at us and called us "the Jamaican bobsled team of baseball". We went ahead to beat Korea on their home turf in the 2017 World Baseball Classic (WBC) and finished in 6th place."

Kurz looked to take the team to a new level by bringing on Eric Holtz as manager. "When I told him we're going to the Olympics, Eric said, 'You're dreaming – but I'm in.' So as Herzl said, dreams are good." Kurz hopes the younger players will use the experience as a stepping-stone in their baseball careers.

David "D.J." Sharabi is one of them. At 29, the kashrut-observing young man approaches his work without fanfare. Sharabi didn't allow an earned run in three appearances but was distraught when the umpire missed a called third strike against Jose Bautista, which allowed the former major leaguer to win the game for the eventual bronze medalist Dominicans.

Josh Zeid who heroically came through with three quality performances, didn't want to think about his baseball future. However, while packing for home, he sought out Israel's Consul General in LA so he could register his kids as citizens upon returning home. Others, like Florida Marlins AAA pitcher Jake Fishman called his Olympic journey "the most amazing experience in my life. Not just the Games but the whole process of becoming [an Israeli] citizen." Fishman, who hails from Sharon MA, was deeply moved during the course of his Aliyah trip when the players held a practice for kids in Raanana. He saw a sign denoting the planned field being built in honor of another Sharon native, Ezra Schwartz, Z"L, the victim of a terror attack."It gave me goosebumps to realize that we all share the same fate and must strive to work to build a common future".

The greatest testimony to camaraderie among the players came after only nine pitches of Olympic play. Starter Jon Moscot, who'd worked his way back to top form after two years of rehab, blew his elbow out throwing a 90-plus mph fastball. Moscot knew his game – and career – were over. He felt that, as Israel's true ace, he had let his teammates down. His teammates tried to console him, saying he should return home a week early to be with his wife, who was due to give birth any day. Jon choose instead to stand by his comrades, rooting them on in their battles.

Moscot views Team Israel's achievements as "magical – not just for the Jewish state but in a wider context of peoplehood."

Jon believes this experience will impact upon American Jews, who will be a bit prouder of who they are because of baseball. Moscot feels strongly connected to his uncle Herbie from Efrat along with Herbie's children and grandchildren, who cover Israel from North to South. Uncle Herbie revealed that "Jon inherited his love for his heritage and menchlichtkeit from his late grandfather who passed down his values - and his Hebrew name Yonatan - to Jon".

Kinsler summed up the experience, describing the joy of traveling together, not only in Japan but during the two-week USA training camp that preceded the Olympics in which Team Israel came together as a unit. "What a journey! We rode on a bus like in old-fashioned barnstorming days, playing exhibition games in Hartford, Connecticut; Lancaster and Harrisburg, Pennsylvania; Aberdeen and Bethesda, Maryland." From there, all the way to Tokyo, the Israel baseball team made history, win or lose. 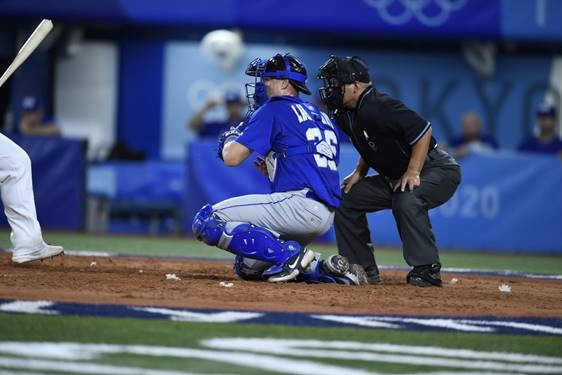 Author's Note: The fan in the stands

It's has been a long journey for me, covering the Israel baseball team over these last few years. I began by helping Peter Kurz with whatever he needed to be done, whether helping players to navigate through the aliyah bureaucracy, providing opportunities for these incredible men to explore their heritage, or raising a few shekels.

I started covering the games for The Jerusalem Post beginning in 2016 with the WBC qualifier in Brooklyn and through the 2019 qualifier in Italy. I came to feel part of the mishpaha amid devoted family members who schlepped from all over to root for their husbands/sons/brothers and fathers. Over two years ago, I applied for Olympic accreditation in order to cover the Tokyo games. As the phrase from Psalms goes, "God watches over fools." Without this accreditation, I would not have been permitted to enter Japan.

In Tokyo, I witnessed the intricate system of rules and procedures as well as logistics that the Japanese developed which allowed the games to be played safely despite the ever-present threat of Covid.

I had to interview players at a distance, but remained close with them throughout. It was surreal to sit in Yokahama's cavernous 34,000-seat stadium by myself, giving rise to the team's new mascot. Whereas the 2017 WBC team had its "Mensch on a Bench," the Tokyo 2020 team had "The Fan in the Stands."

The Israeli Olympic delegation included 17 members of the press and National Olympic Committee members (such as Yael Arad) and Sport Ministry figures, who traveled over an hour each way and sat in 35-degree heat but stayed riveted to every pitch. They asked questions non-stop, eager to learn the game. Following Team Israel's respectable showing, there will be ample opportunities for that.