Why is this Knight Different from Other Knights?

One of the spin-offs of being on the editorial board of ESRA magazine is that we receive invitations to a variety of events. Some are definitely more appealing than others, such as the one that arrived in my email inbox in early July.

"You are invited to cover Sir Cliff Richard's visit to the Nazareth Tennis School, which will be his first visit there since he donated funds in 2005 to help the Freddie Krivine Foundation refurbish the courts in the grounds of the Nazareth YMCA."

When I replied that I'd like to come, Jane Krivine, who runs the Foundation that bears her late father's name, told me: "Hopefully you'll have the chance to meet Sir Cliff."

Actually, unbeknown to Jane, this wouldn't be the first time I'd be meeting the famous pop star.

My mind went back more than 40 years, way before he became "Sir" Cliff. It was 1971 and I was a member of the current affairs society at Woodhouse Grammar School in the north London suburb of Finchley. The Christian union suggested that we invite Cliff to speak at a joint meeting of the two school clubs.

To our delight, he agreed to come and there was a fantastic turnout. Certainly, never before had so many Jewish pupils attended a Christian union meeting. He was a very entertaining speaker and came across as a genuinely nice guy.

After the meeting, some of us had tea with him in one of the classrooms and a photographer from the local newspaper took this photo.

I'm the girl with the long hair sitting two away from Cliff on his left. I'd love to have been right next to him, but that privilege fell to Judi, one of my best friends at school. Despite the initial chagrin I felt at being thus sidelined, we have remained close friends, which is just as well, because when the opportunity arose to meet him again four decades later, I recalled that photo and wondered if by any chance Judi had kept the cutting. Indeed she had - well, she was sitting next to him; of course she'd kept it.

And so in 2013 I came to the Nazareth Tennis School, newspaper cutting in hand. As we awaited Cliff's arrival, I showed the picture to a young journalist sitting next to me. "What an amazing photo," he said, but I sensed from the faintly pitying look he gave me that he thought I was a sad granny groupie – which of course was not the case.

A selection of Cliff's well known songs played as he came onto the stage for the welcoming ceremony. Then he went onto one of the courts to play tennis with some of the school's budding young players, whose ages range from 8 to 18. 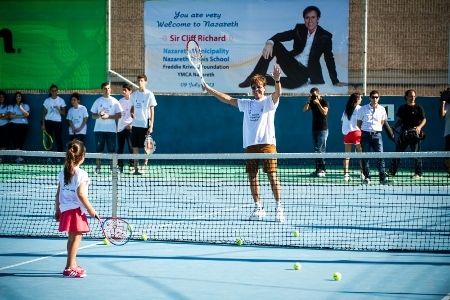 "When I first heard about the Freddie Krivine Foundation and its aim to bring Israeli Jewish and Arab children together, I needed no persuasion to be involved," he told journalists during a refreshment break. "Building bridges between communities through my favorite sport of tennis was a perfect concept for me. Arab and Jewish children playing sport together with all that means in terms of healthy competition, confidence and camaraderie can only sow good seeds for the future."

He said he had been at Wimbledon for Andy Murray's historic victory just two days earlier. "When you talk about the possibility of one of these young people one day being at Wimbledon, well, this is the city of miracles. But even if you never become internationally known tennis players, it's the most wonderful social sport."

When the press session came to an end, I showed him the photo. He was taken aback at seeing this decades-old image of himself, although he hardly seems to have aged. I had one more request for him, and he agreed. Here's the picture, with me standing right next to Sir Cliff Richard. 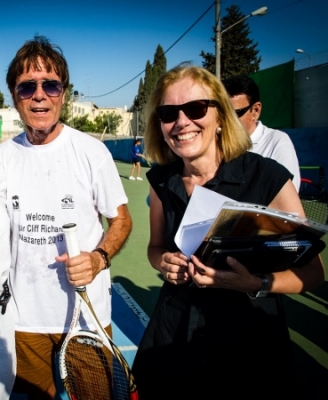 This is now...Marian catches up with Sir Cliff at the Nazareth Tennis School
PRINT