Sylvan Adams is Getting Started

"Climb every mountain," warbles Mother Superior, in one of movie-land's iconic scenes. And not just ordinary mountains: novice Maria hears the sound of music while whirling through Alpine pastures; the Chief is talking serious peaks. But the wise old nun is being metaphorical; she doesn't actually suggest scaling the heights on foot. And certainly not on a bicycle.

Yet, during the famed Tour de France, Giro d'Italia and Vuelta a España, superman riders propel themselves up some of the steepest climbs in France, Italy and Spain at breakneck speed. And not just once: the races span 23 days, with only two days to rest aching muscles. It's a feat of endurance to be seen to be believed: the sweating, sinewy riders galloping their bikes to the top, to the top, to the top before they drop, and then floating breezily down on the other side. The route meanders around beautiful France, or dazzling Italy; it's a sport best watched from a comfortable couch, preferably with a cold beer and a bowl of salted nuts easily accessible.

But not if you're Sylvan Adams.

Adams, 62, self-appointed Ambassador at Large for Israel, served for close to 25 years as president and CEO of Iberville Developments, one of Canada's largest real-estate development companies, founded by his father, Marcel. A passionate amateur cyclist he has a collection of titles and gold medals, including from two world championships and a bunch from the Maccabiah Games. In 2016 he and wife Margaret made aliya; he hit the ground pedaling in top gear. Adams, who proclaims he is still "only getting started", has spun into action on multiple fronts, funding mega-projects that include Save A Child's Heart (SACH) – an acronym that could just as well stand for the "Sylvan Adams Children's Hospital" - at the Wolfson Medical Campus in Holon. SACH brings children from developing countries around the world who are suffering from cardiac issues; they often arrive in Tel Aviv hardly able to walk and leave some weeks later skipping merrily, fully healed.

Other gargantuan programs include a generous gift to SpaceIL, the nonprofit organization which got the first Israeli spacecraft successfully to within a few minutes of the moon, only to crash on landing. "Never mind," says Adams, "next time we'll get it right." 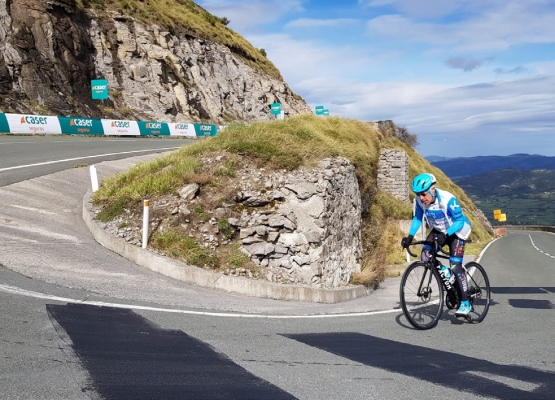 Sylvan riding on the racecourse at the 2020 Vuelta a Espana

In 2019 Adams dreamed up the whopping publicity stunt of flying Madonna to Israel as a Eurovision guest act; although her crash landing on stage arguably outdid the spaceship, the goal of her appearance was undeniably a success: he estimates that a record 300 million viewers tuned in to see the superstar strut her stuff on the stage of Tel Aviv. But even that pales into insignificance next to Adam's 2018 coup: bringing the Giro d'Italia to the Holy Land, resulting in over a billion followers of the race tuning in to see riders zooming down the Arava to Eilat and winding up the Judean Hills to whizz around the twisting streets of Jerusalem. It cost Adams an estimated 20 million dollars to do the deal – it was the first and only time any stage of the Giro had taken place outside Europe – but he is pleased with his return on investment. "I felt that we were getting a raw deal from journalists abroad," he explains. "They often highlight only the bad things that go on in this part of the world. I want to showcase the good stuff, the beauty of Israel, and how we are a light unto the nations. We are an exemplary country and I want to get that message out." 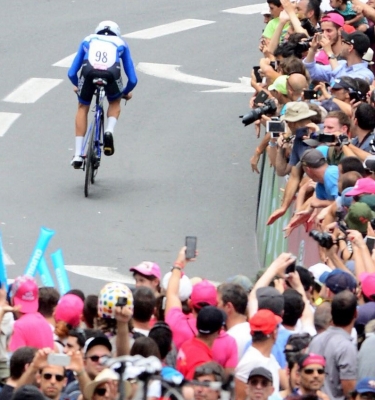 In the short space of time that Adams has called Israel home he has catapulted Israeli competitive riding into the stratosphere. He is co-owner of the Israel Cycling Academy (ICA) whose team was founded in 2015 and has since grown up to race at the highest level as a UCI World Tour team, newly named the Israel Start-Up Nation Team. In 2017 he founded the first Institute for Sports Excellence in Israel at the Tel Aviv University. He also partnered with the Municipality of Tel Aviv and KKL-JNF Canada to construct the Sylvan Adams Commuter Path, a biking path connecting Tel Aviv with surrounding areas to facilitate quick, safe bicycle commutes to work. 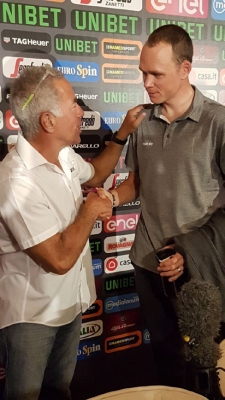 Sylvan greeting Chris Froome in Jerusalem at the Giro Big Start, May 2, 2018

There's more: Adams established a simulation center in his own beachside Tel Aviv apartment where Israeli competitive riders could hurl themselves up Alpine slopes with the Mediterranean lapping below; he also built the first velodrome in the Middle East, at a cost of 25 million dollars, with state-of-the-art equipment, training facilities, and a world class cycling track. There the National Track Cycling coach regularly evaluates talented young riders, recruiting them and developing their talents. Today the Israel Start-Up Nation Team consists of 32 riders who race in some one hundred races locally and internationally each year. So far four Israelis race in the team, the rest of the members come from all over the world. In an almost impossible to believe coda, Adams has now recruited Chris Froome, possibly the world's best living rider, to the Israel Start-Up Nation Team. It's comparable to co-opting Federer (in his heyday) to play for Israel in the Davis Cup, or Leo Messi to captain Maccabi Tel Aviv.

"It sure is a dream," admits Adams, "but remember, I'm just getting started."

While he warms up he funds the annual "Bonei Zion Prize" that is given every year in his name by Nefesh b'Nefesh. The award recognizes immigrants to Israel from English-speaking countries who have impacted Israel in the fields of science and medicine, education and nonprofit work, national service, business, technology and culture, and arts and sports, and offers each recipient a $10,000 prize. He also administers the Adams Fellowships Prize, established by his parents, which annually provides doctoral scholarships at the Israel Academy of Sciences and Humanities.

Riders training in a velodrome have no brakes and only one gear – they have to continue to pedal madly as they whizz at breathtaking speed along the slopes of the track. Sylvan Adams is pedaling right alongside, not slowing down for a nano-second. He is the only Israeli so far to have signed Warren Buffet and Bill and Melinda Gates' "Giving Pledge" - a pledge by some of the world's wealthiest people to donate the majority of their money to philanthropy. "My hope is that other Israelis will follow my lead," he says. "There are a lot more who can join us."

Adams is blazing trails in all directions: he recently appointed the first woman sports director in men's professional cycling – Cherie Pridham – to his Israel Start-Up Nation Team. With grit, great training, a secure cash flow and brilliant riders, (under the direction of a competent woman), we can only expect record-demolishing times ahead for tiny Israel in the world's most prestigious races.

Who knows? Soon the Alps might be alive with the sound of Hatikva. We live in hope.