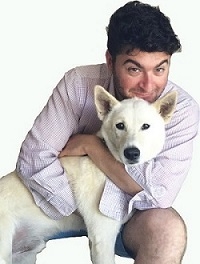 Somehow, you don't really expect the author of a dark psychological thriller to display a wry sense of humor, but the lingering impression of newly-published 29-year-old author, E. Z. Rinsky, is of a hint of a smile straining to avoid breaking loose into a laugh.

Tel Aviv based Rinsky's first published work, Palindrome, had just arrived on the Amazon bestsellers' list when I caught up with him last November. So confident are Harper Collins that they are publishing the sequel in the spring, and it could evolve into a trilogy. Meanwhile, translations into Hebrew and Czech beckon.

Despite his sense of humor, Rinsky's plot is anything but comedy. It encompasses mystery, suspense and even horror, but flashes of humor percolate through to lighten the read, and are particularly evident in the symbiotic working relationship between Private Detective Frank Lamb and his odd-ball tracker, Courtney Lavagnino, in which they alternate in the role of the straight man.

The pair take on a commission from a supernally beautiful woman to find a lost tape -recording of the last few minutes of her sister's life – made by her murderer. This is not just any tape, however, but is one that is sought over and fought over as it provides the answer to one of life's ultimate mysteries - the nature of "life after death".

Rinsky displays evident surprise that people tell him, in all seriousness, that they have been disturbed by Palindrome. "Some have told me that they don't read it at night because of the dreams," he reveals. "I know it's dark and sometimes it even scares me a bit, but I find life has humor in everything. I have a hard time taking things seriously."

Why did he pick on this metaphysical riddle as the central focus of the book? "The question of life after death bothers everyone," he states, adding: "The difference between people is the extent to which they suppress that. Everything we do has this subtext that we don't really know what's going on."

Aged 12, he could not sleep for wondering about it, but adds, "Like most adults, I learned to push it aside and live with it, but I still haven't come to terms with it, and people who say they have figured it out are deluding themselves."

Whilst his main aim was to write "a fun book that held together", the metaphysical mystery "made for good drama". Although maintaining that the answer he provides is fictitious, and just one possible answer, what really interests him is the way people deal with the question. He builds on that idea with: "The really interesting thing is how people would behave if they knew there was an answer."

Rinsky landed on the mystery genre as a framework for keeping focused. Yet this book is certainly no standard mystery thriller, and that might just be because its author has not actually read so many. As a youngster he loved science fiction, and there remain vestiges of its influence in some dreamlike passages in Palindrome.

But nowadays he is an eclectic reader and has more recently enjoyed such widely acclaimed works as Yuval Noah Harari's Sapiens, and Sophie's World by Jostein Gaarder. Rinsky also rates Jonathan Franzen's widely acclaimed novel, Corrections, as "worthy of all the praise it receives for capturing a certain Americanness really well".

After the Palindrome series, Rinsky envisages reverting to a more traditional novel and finishing off a manuscript he had set aside for Palindrome. Although he is adamant that "it will still be fun in the way of Palindrome", another glimpse of his dark humor is spied when he reveals that it explores the story of 11 people on a boat after a nuclear holocaust. "The context," he says, "started percolating when the Iran deal was at the forefront of everyone's mind."

Was there something in his childhood that led to these dark imaginings? "My home life was so great," he laughs, "that I sometimes worry about not having enough material. It was definitely not traumatic."

The small Colorado town of Beulah becomes one of the locations in Palindrome, and its sequel is set almost entirely in Colorado. Rinsky characterizes his home state by explaining: "I think the vibe is that on the surface it's an idyllic, beautiful place with majestic mountains, green golf courses and beautiful, glowing people. But in this beautiful, perfect-looking place there is a lot of unhappiness – an unhappiness amplified by wealth."

Although he admits that he felt out of place in Colorado, he acknowledges that he never experienced any anti-Semitism, and even found that being one-of-a-kind conferred certain advantages.

"It's almost part of the Jewish story," he explains. "You have to stick with it (Judaism) or it's gone. We were certainly a novelty. In fact, at school people found my identity interesting. It was like going to school with a unicorn," he smiles again.

At 18, Rinsky moved out east to Brandeis University in Boston, with both the city and the university's kosher cafeteria providing a big draw. Clearly, he had looked forward to the novelty of the university's particularly Jewish environment, whereas in Colorado there had been few Jewish people.

Rinsky has kept up with friends from both Colorado and Brandeis where he studied economics, obtaining an MA, after which he experienced what he jokingly terms his "quarter-life crisis".

When the realization forcibly struck home that he could not envisage taking the anticipated path of working on Wall Street or in banking, he took up street performance as something of a one-man-band, singing with a banjo and xylophone on the streets of Boston and New York.

"It was very hard work," he concedes. "The irony is that it became as tedious as clocking into an office every day. My first book was a memoir of my street performing and I hope it never sees the light of day."

That nadir of personal upheaval proved to be his catalyst for realizing that what he really wanted to do was write, so he moved to New York with the aim of getting a book published, all the while teaching economics and statistics at City College from 2010 to 2015. Subsequently, he has discovered that he "really loved and misses" teaching, despite its being "very hard work that requires energy".

What prompted Rinsky to make aliyah in 2015, following his parents who had preceded him to Israel in 2012? "I just knew I wanted to do it, so I pulled off the Band-Aid before thinking about it," he admits.

"I see a better future here than in the United States and eventually I would prefer to raise kids here," he explains, adding hastily, "Not that America was bad – I loved living in New York, but I think that I am a happier, better person here. I just find life is pleasant."

Comparing America he says, "I think there is a part of the U.S. that's too comfortable and breeds some undesirable aspects. Life is certainly not as comfortable here, but I am willing to sacrifice some comfort. In Brandeis it was like being in Israel," he notes. "Here, I don't have to engage with it (his Jewishness) that much. I don't have to think about it that often."

Does life feel more vibrant here? "I think the vibrancy is something, but people here are able to relax too – certainly in Tel Aviv." He also prefers the work-life balance in Israel. "In New York they put work first but here kids come first."

So would he label himself a Zionist? He rubs his chin before venturing, "I don't necessarily agree with everything the government does, but I really love this country. If that's a Zionist, then I'm a Zionist."

Palindrome is available at Steimatzky, at$11.99, and it is published by Harper Collins under the Witness Impulse imprint.