How Work Became Fun The Second Time Around

Adventures in the Laugh Trade 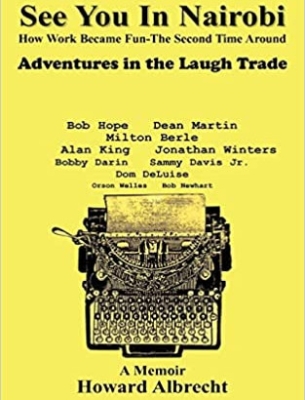 By Herb Hahn and Howard Albrecht

The first time around, Howard Albrecht worked in the family business, a chain of women's clothing stores in the New York City Metropolitan Area. After twenty years in the retail trade, Howard took a leave of absence from the business, his wife Bernice and two children. He moved from New York to Los Angeles for a new start in life and a try to make it as a comedy writer. It was not easy but with perseverance, innate talent, and some connections, he succeeded.

So how did it all begin? As they say in Yiddish, fang un fun unfang, let's start from the beginning. Howard was born April 24, 1926 and grew up in the North Bronx. The building his family lived in, 245 E. Gun hill Road, was very close to Woodlawn Cemetery. You don't get more north than that. I lived across the street in 250 E. Gun Hill Road. Howard's younger brother Bobbie was my friend. Their cousin, Ernie Schwartz, was best man at our (Herb and Lenore's) wedding. Howard's maternal grandmother shopped in my father's neighborhood fish market.

I recently sent Howard a copy of my story about Bess Myerson, Miss America 1945 (See ESRA Magazine issue #209, June 2021 pages 34-35). Howard replied, "Interesting. When I was about 16 or 17, I used to hang out with a group of guys from the Amalgamated Housing project. I think it was on Giles Place, near Gun Hill Road. They had a club; one of those big rooms in the basement of an apartment house that they filled with couches, a little bar and dark lights. They held dances on Fridays and Saturdays. Charged the guys to get in. The girls got in for free.

One Saturday night, I had the pleasure of dancing with a tall, beautiful girl, Bess Myerson. Of course she wasn't Miss America then. She was just a neighborhood girl and I, like the other guys who went there, just wanted to dance to Glenn Miller and Tommy Dorsey records. And to touch as much female flesh as I could. I picked the tallest woman, figuring the more woman the more flesh. Little did I know she was a future Miss America.

Howard's father Sol and Sol's brothers ran the business. I asked Howard what had happened to the once thriving stores. He said the stores were located in neighborhoods that at the outset were primarily Jewish. As the population changed in these areas, the stores were either sold or just closed. Sol was married to Ada Rabinowitz. Ada's father was a friend of Adolph Zukor in their younger days. Zukor asked Rabinowitz to invest in his fledgling motion picture business, but Rabinowitz did not have money to invest. Zukor went on to be one of the founders of Paramount Pictures. Ada said if her father did have the money to invest, she would have married Clark Gable instead of Sol Albrecht. So they got married in the Hotel Theresa, what was then The Waldorf of Harlem. It was built in 1912-1913, back in the days when Harlem was a Jewish enclave. A note of interest - in 1960 Fidel Castro and entourage stayed at the Hotel Theresa when Castro was in New York to address the United Nations General Assembly.

So, Howard worked his way up to being a notable television writer and moved his family to Los Angeles. He wrote for the likes of Jonathan Winters, Milton Berle, Alan King, Dean Martin, Bob Hope, and Dom DeLuise, among others. He also wrote for television sitcoms such as The Love Boat, The Jeffersons, Maude, and Barney Miller. Plus, he authored and co-wrote a number of books. "See You in Nairobi. How Work Became Fun - The Second Time Around - Adventures In the Laugh Trade" gave me the inspiration to write this story. He also wrote The Odd Father, Oh Henry,–The Supersecret Adventures of Henry Kissinger, to name a few. And if you are curious, check out "Howard Albrecht: A Video Biography" (You Tube). Very interesting.

Unfortunately, Bernice passed away a year ago and is sorely missed by Howard and family. Ernie Schwartz passed away a few months ago. He and Howard spoke to each other by telephone every week for at least an hour, two jokesters.

Howard carries on. May he live in good health to 120 or more.