The Life and Times of Miriam Freda Shapiro 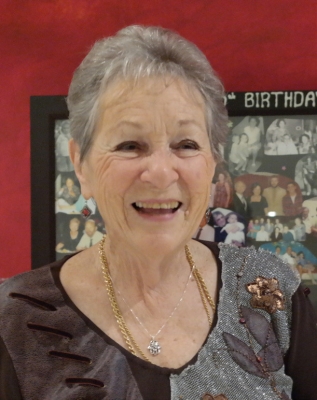 Miriam passed away in her sleep at Protea Village on 21.10.2021 after a year-long struggle with numerous health issues. She is remembered by her son Eddie, her six grandchildren, thirteen great-grandchildren and two great-great grandchildren; and by her brother Joe (age 90). Her second son Ralph (OBE) predeceased her.

Miriam's story is typical of many former South African Jews – born to two Litvak parents, Zalman Davidovitz and Pessie (nee Alufovitz), who came to South Africa to escape the pogroms of Lithuania and to make their fortunes in "die goldene medinah". Diamonds had been discovered in South Africa in 1867 and gold in 1886. At the turn of the 20th century Jews and others began arriving on ships to Cape Town and from there made the arduous journey overland to the Transvaal. With this wave came Miriam's grandfather, just prior to WWI. He opened a general store in Parys. Her grandmother, mother and six siblings whom he had left behind were caught up in the war and were forced to flee their home, inland to Russia. En route her grandmother died and after the war, her mother, aged 16, had to bring her six younger siblings to South Africa by herself, to meet their father whom they barely knew. Miriam's father also arrived after the War and tried his luck as a prospector on the diamond fields. In those days, the potential prospectors won their claims by participating in a race. The landowners marked out a number of lots of equal size, which could then be staked. The prospectors would buy a wooden stake with a flag attached and were lined up holding their stakes. They then had to race to these lots to "stake their claims", but there were always fewer lots than there were stakes. Miriam's father had smoked fish for a living in "der heim" and tended to eat a little too much of his goods. As a result, he was too heavy to win any races. He soon gave up and instead made his fortune by selling picks and shovels to the prospectors in the Bakersville diamond diggings.

Miriam was born in Vryburg, in the Northern Cape. She remembered her parents' first house in Vryburg, where her father had bought an insolvent estate which included a shop. The house was unfinished when they moved there and their front door was a blanket. Zalman loved buying job lots and once acquired 100 left shoes. He managed to sell them all. Vryburg was on the fringe of the Kalahari Desert – very dry and dusty and water diviners were in great demand. Miriam discovered that she had the ability to use a "Y" shaped tree-branch to find underground water-wells. Vryburg was almost exclusively Afrikaans and very anti-Semitic. In fact, the leader of the pro-Nazi Black Shirts, Robey Leibbrandt, operated out of Vryburg. Leibbrandt, the South African heavy-weight boxing champion, became a Nazi admirer during the 1936 Berlin Olympic Games. After training in Germany he was sent back to South Africa by Hitler to assassinate General Smuts, who was pro-British. Anti-Semitism was rife but the family dealt with it fittingly. One humorous incident occurred during WWII when a Nazi sympathizer told Zalman that when Hitler came he would take over his General Store (which was the largest enterprise in town). Zalman answered "Sorry, but he can't have it because I promised it to Mr. Van Tonder".

Beyond her love for her late husband Mike and her two sons, Miriam's passion was gardening, flower arranging and in later years, painting. The first garden she built was in their home in Vryburg, where water was scarce. It was beautiful and was a big factor in selling the house when Mike and Miriam decided to move to Johannesburg, so that their children could get a Jewish education. As it happened, their prospective buyers arrived to see the house of on June 7, 1967, the third day of the Six Day War – the day on which Jerusalem was liberated. Miriam ran out to meet them shouting "Jerusalem is ours". The non-Jews were rather taken aback, but they bought the house nevertheless.

Miriam's romance with flower arranging began when Mike got a one-year job building a stadium back in South Africa. While she was working as a volunteer in the Women's Zionist League shop in Johannesburg she heard about a florist running a training course, which she completed with distinction. Upon her return to Jerusalem she took a job at the King David Hotel but resigned after six weeks and joined Ziva Altman who was the florist at the Hyatt. Miriam worked there for the next 15 years, but took on private work arranging bridal bouquets for religious girls. She stopped working with flowers for a living when she moved to Netanya, except for doing the Shavuot flowers at the Young Israel shul, where they she and her husband ?were members. She gave flower demonstrations for charity. She then took up painting with as much energy as she had put into her flower arranging and participated in numerous Art Exhibitions at the AACI, ESRA and at Protea Village . And, in every community she lived, Miriam always contributed her time and efforts to doing charitable work.

Miriam got things done. In her quiet and pleasant way, she took responsibility for numerous tasks, for example she ran the ESRA Knitting group and Seuda Shlishit at Protea Village. As one of her friends described her: "Miriam was certainly bossy otherwise she wouldn't have achieved so much, but when you worked with her you never realized you were being bossed around".

From a small antisemitic village of 2,000, in the Northern Cape of South Africa, to Protea Village, in the Sharon region of Israel, on an 87-year journey, she made a loving family and many good friends, all the while having wonderful experiences. She will be missed.