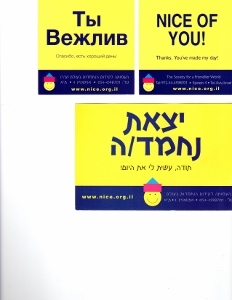 Two enterprising young men with a mission, Ron Adini and Tomer Kerman, launched an NGO in the name of "Nechmadut" which they labeled as "The Society for a Friendlier World". Ran is in the world of marketing and advertising and Tomer is a writer of children's books. Lovely people.

Way back in 1999 I was advised of their existence by a friend who knew of the Quality of Life Conference I had initiated in the early 1970s with Telfed, the AACI, the British Zionist Federation and the British Olim Society. We called it "Koach Kan" suggesting that we had the strength to improve the quality of life in Israel.

I contacted them and we had an excellent meeting. They told me of their plans relating to Nechmadut and I reported on the goals and recommendations of Koach Kan, one of which was to prepare a polite card asking people to stop smoking where it was prohibited (in those days), thus avoiding an oral confrontation.

I also told them that nearly all English speaking new immigrants to Israel knew at least three words in Hebrew – toda (thanks), bevackasha (please) and slicha (excuse me) but that these words were hardly used after settling down. An Israel businessman, on hearing this, published colorful stickers in Hebrew with a smiley on which was written – "We all say - TODAH, BEVAKASHA, SLICHA". It was a great hit.

They liked this concept and that very day drew up an attractive card in Hebrew and English – which is now also available in Arabic and Russian too. It reads: "NICE OF YOU. Thanks. You've made my day." And on the reverse side is written: "Someone treated you nicely? Give him/her this card. Someone gave you this card? Evidently you've made his/her day."

The Society for a Friendlier World was established in order to make humanity friendlier and more pleasant. We believe that the way to achieve this goal is to inspire more and more people to adopt the Friendliness Concept and behave appropriately. 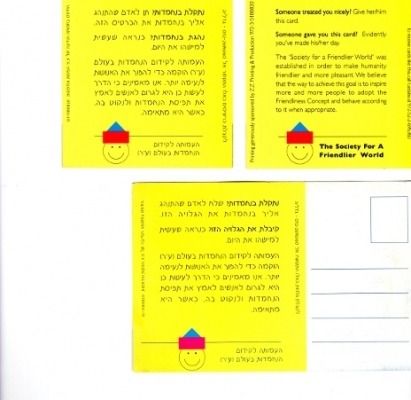 I quote from their Friendliness Covenant:

"Our goal is to make humanity more pleasant. We believe that the way to achieve this is to raise the level of friendliness. Friendliness is a way of life and as human beings who live in this hectic day and age, we often forget how easy it is to be friendly.

Friendliness is neither a religion nor a cult and as such it does not contradict any belief or way of life and therefore every man and woman should adopt it and behave accordingly.

This idea may seem obvious, yet we feel that people in general are not behaving in a friendly enough manner, and our goal is to make more and more people adopt the Friendliness Concept. Being friendly does not weaken you. The opposite is true: it strengthens you and asserts that to be friendly is to be happy."

I keep their cards on me and am happy to hand one over with a "thank you" and an explanation to any person who has been friendly and helpful to me. Most recipients have never seen the card but, without exception, have been delighted and intrigued to receive it. One secretary immediately pinned it on to the office notice board, and her colleague also wanted one – but I said it had to be earned.

In another case, a municipal clerk was dealing with us with a degree of courtesy. I thanked her and said she deserved this card. What a big smile we received and how the service improved!

Ran and Tomer have gone to schools throughout the country to talk about "Nechmadut". They have involved the children in poster competitions reflecting friendliness and have had a great deal of success.

They were interviewed on an Arab radio station operating in Nazareth, and the response to the interview was such that they printed cards in Arabic.

They have distributed over 500,000 cards and the demand for them keeps growing. Many overseas visitors have been excited about the idea and taken cards back home with them.

Keep "Nechmadut" cards on you. Give them out. Make someone's day and enjoy doing so.