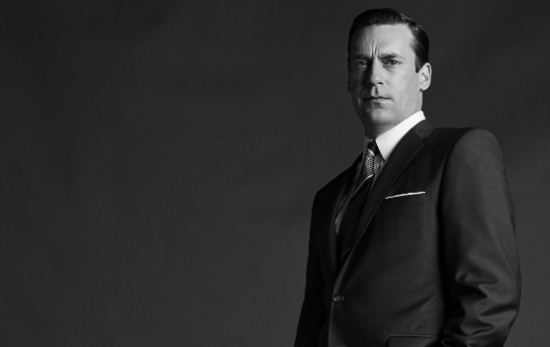 It's been one of the hit TV series of the past decade. Mad Men told the fictional story of those who worked in advertising on New York's famous Madison Avenue in the 1960s. The term 'mad men' was a slang phrase coined by advertising people working in agencies on that street in reference to themselves. With its cool creation of the fashions and styles of the day, the world of Don Draper, played by Jon Hamm, caught the imagination of the viewing public.

But how true were the stories the seven series and 92 episodes portrayed? And was life in that segment of the Big Apple as sexist as the show made out? If anyone should know, it's Herb Hahn, a regular ESRAmagazine contributor, who worked in advertising in New York for 36 years. He was the top-billing salesman at a national radio station sales rep firm, and a vice-president in the New York office.

During his career, Herb became very close personal friends with a few of Madison Avenue's 'real' Mad Men. One was Jerry Pickholz, who was chairman of Ogilvy & Mather Direct Worldwide and vice-chairman of the parent company, Ogilvy & Mather, at the same time. He later opened his own agency with 60 employees and participated in the dot.com frenzy. When Herb asked Jerry about his real-life experiences versus Mad Men, Jerry said: While I view Mad Men as a gross exaggeration of the truth, I saw many people drink to excess – but not at 10 a.m. I also saw sexism, but it wasn't blatant. On the rare occasion we had pitching new business and weren't winning it, we made a party. At the party we drank to our lost client's opportunity to have our services. Their loss was how we saw it. The drinking took the form of bobbing for apples, floating in a large bowl of vodka. By the end of the party we found the apples unscathed . . . but the bowl was sucked dry! Another funny anecdote from Jerry: My global travel was for business, which included getting to know the people who ran their respective offices for us, and to see the advertising they produced. In line with that goal, we attended a dinner one night in Hong Kong which was attended by the entire staff. Early in the evening they were all polite to a fault. After a drink or two…or three or four, the crowd got a bit loud – then raucous. At that point the office manager quieted them down and suggested we be serious. They presented me with a dilemma which they could not solve. (I sensed immediately that they were up to something… ) I was handed a slip of paper and I read aloud, 'What is the most effective way to sell condoms'. The laughter and clamor made the floor shake. I took a deep breath and suggested the introduction of the product they had chosen was best done with a demonstration. I also suggested that a live demonstration was best, and called for a volunteer to help me. The staff went in to hysterics. And NO, there were no volunteers.

One of the top art directors at Doyle Dane Bernbach Advertising (DDB) in the 1960s was Len Sirowitz. Len's work included the famous Volkswagen ads, ads for El Al, and brilliant public service ads for Mobil and Sony. In the 70s, he set up his own successful ad agency. In the 40s, both he and Herb attended the same public school in the Bronx, and in the 50s both worked at DDB. Len has been inducted into the prestigious Art Directors' Hall of Fame. He is one of the finest art directors ever. At a DDB 60s reunion of writers and art directors, Len talks about meeting with VW executives in Wolfsburg, Germany. Len was the art director and Bob Levenson was DDB's copywriter on the account – two Jewish boys from New York. The VW meeting took place in the early 60s, and the group went to dinner one night in Braunschweig, the next town. Recalls Len: We were all drinking away when one of the German guys sitting across from us starts lamenting about what a sad state the German economy was in today. If we only hadn't lost the two world wars, he says. Bob Levenson's blood was beginning to boil and Bob says, yes… and you lost two in a row. The tension mounted and the German guy's boss put his arm around the guy and said, Hans, I think you just lost the third. Len's reunion speech can be seen on YouTube in Doyle Dane Bernbach 60's Reunion Len Sirowitz Volkswagen. By the way, both DDB and VW are featured in an episode of Mad Men. DDB public service ads for Mobil started in 1966 with 'Till Death Do Us Part', one of the We Want You To Live series which were conceived by Len to publicise highway safety. Another said: 'Please Don't Get Killed on Sunday. We'd Like To Sell You Gas On Monday.' In September 1979, 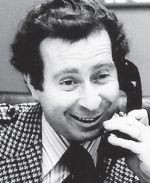 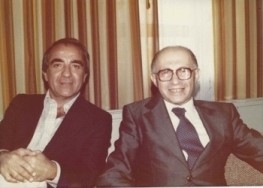 Jerry and his wife Phyllis visited Israel, and a meeting with Menachem Begin had been arranged. Recalled Jerry: We were alone with the Head of . . . the State of Israel! He could not have been more gracious, greeting us as though we were old friends. He was patient for a photo session, telling Phyllis where to sit next to him, and then offering similar advice to me. He became the director of our photo-shoot. He asked about our children and urged us to have them visit Israel...and stay. Herb recalls another real-life Mad Men-type story: My wife, Lenore, and I were at a broadcasting convention in Las Vegas. During some leisure time, we were having cocktails with a few of my station clients. One of them had had too much schnapps and whispered to Lenore, 'Get rid of him.' On the journey home we were flying first class and all around us were station owners and top network TV brass. 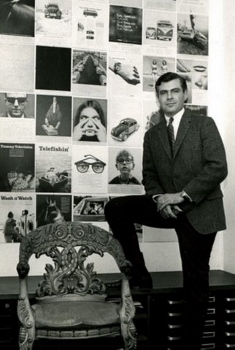 Top U.S. art director Len Sirowitz stands in front of some of his memorable ad campaigns of the 1960s

One of the network executives took a fancy to Lenore and came over to chat with her. As we were exiting the plane in New York – and unbeknown to Lenore – he slipped a business card in to her raincoat pocket. She found it when we got home, and on the back was a hand-written message – 'Call me'. Next thing she is on the phone with her girlfriends telling them, 'You won't believe what just happened to me!

Finally, Herb recalls another story: One day, after work hours I was on my way to meet Jake Einstein, the sales manager of a Washington, D. C. radio station my firm represented. He was in New York to make sales calls with us. On the street I see one of my sales reps, Bob O'Brien, speaking with another one of our station clients, Marv Dyson, who was in from Chicago. I started to laugh. Bob is Jewish and Marv, an African American, is also Jewish. Both their wives are Jewish. I could not stop laughing because I was on my way to meet Jake Einstein for cocktails at the Plaza Hotel…he is not Jewish.

Added Herb: My thanks to Len Sirowitz and Jerry Pickholz for their help about the real Mad Men in advertising.