On the way to Zanzibar, I used the five-hour flight to read a tourist guide of the African island. After all, had we not grabbed a last minute package deal, I never would have known about (least of all come to) the African island. Looking for a book at the airport, I kept mixing up Zanzibar with Tanzania. Africa….an unknown continent which suddenly opened to me. Having traveled all my life, I had never been to the "Dark Continent" as it was known to the many explorers and invaders who plundered its riches.

As I read, on my naturally strong curiosity was peaked. The island's history was fascinating. Conquered by the Portuguese, by Muslim slave trade countries and by England, Zanzibar seemed like a conglomerate of different cultures, religions and ethnic groups. Alongside coral reefs and spice farms, there was an ancient city (appropriately named Stone Town) to explore. I read that an Arabian princess (one of 70 children to the Sultan and his many wives) wrote a book in the 1800s about her life in Stone Town. Reading some excerpts, I imagined life inside the harem. By the time I arrived, I almost expected to be met by a white Arabian horse and prince come to fetch me. Well I did let my imagination go a bit. 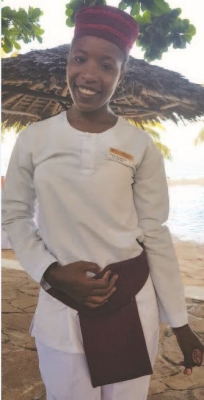 All smiles from a waitress at a hotel in Zanzibar

In reality, Zanzibar was a shocking jump into a totally new culture with sights and sounds as exotic as its name. Colors are bright and titillating. A sea of aquamarine blues and greens with topical flora and of course many types of monkeys, birds, turtles, snakes and insects that necessitated sleeping surrounded by netting - put up every night by the many black smiling staff of our resort. "Katuna matata" ( all is well) and "jumbo jumbo" (hi how are you? fine thanks) filled the air already languid with high humidity and breezes from the ever present ocean. Daily swimming and snorkeling made joining one of the many guided tours around the island difficult to get enough energy to do. Israelis call this kind of vacation "beten gav" meaning doing no more than changing position between lying on one's stomach to lying on one's back.

But Stone Town was another story. Maybe I had had a past life there? I felt such a strong pull to see it. All the Israelis we talked to in our resort said it was awful. Poor and filthy, it was more like the Gaza Strip than like a beautiful old Arabian town of sights and sounds to be explored. My husband was adamant that if so many tourists disliked it, Stone Town wasn't worth a side trip.

As the days flew by, I was left with a nagging feeling I was missing something. Being an academic for well over forty years, I had often gotten to know different cultures by connecting with other academics and arranging meetings, lectures or workshops. While Zanzibar was the opposite of most places I had been to, my habits of so many years kicked in. Maybe there is someone in Stone Town I could see, someone connected to the only college on the island. That would be a good way to get to see the town and learn about the people. 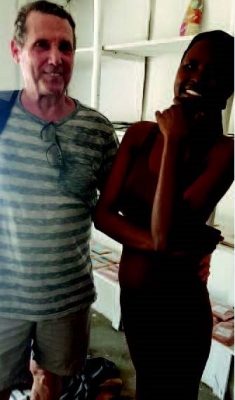 Claire’s husband, Yossi, and one of the local beauties

Arranged through Google, I found myself easily texting the head of a college in Stone Town who wanted to meet me. Feeling reassured that my regular academic routine worked in Africa as well, I arranged a meeting with her in Stone Town the following day. That was easy, I thought. We are indeed becoming a global village. Even though the town around our resort was clearly third-world, everyone had a cell phone. Going out in the ocean in the ancient wooden boats used for centuries, our skippers were on their cells most of the time. So that felt familiar, and I understood that Zanzibar is a mix of old and new.

Easily arranging with a local taxi for the hour and a half trip to Stone Town, we optimistically headed off the next day for Stone Town. After half an hour on the only road on the island, the taxi stopped. A tree had fallen down and was blocking the road. Traffic piled up in both directions as our driver practiced his English on us. "No problem…they will come soon to chop up the tree and move it". Meanwhile I got a lesson on his family who all lived together in one big hut. He described how happy he was with this arrangement as he waited for his parents to arrange a bride he could bring home. Although he was 25 years old, he had never left the island because his mother (who did not react well to the fumes of the local buses) might need him to go shopping for her. He was happy to be at her disposal. I thought with envy about my daughter living far away from us in Vancouver. Maybe they have it right, here in Zanzibar, I thought to myself. 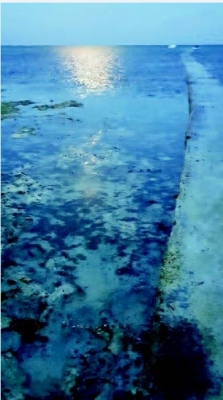 A full moon at low tide

Although the driver reassured us that someone was coming soon to remove the tree, after a half hour we decided to go back to the resort. Texting the college director, we decided she would come to our resort the following day. I went back to lying on my stomach next to the sea. We heard later that it took half a day to remove the tree so I was relieved we had left. Half a day with no going in or coming out of Stone Town seemed like a lot of influence one tree had on the population. But I was going with the flow.

Next day at the time of the meeting, no one appeared. Two hours later after frantic texting I got a reply from my colleague that her car had a flat tire and she was calling her husband to fix it. I remembered the holes in the pavement of the one road into and out of Stone Town and thought to myself that having a flat might be a daily occurrence here on the island. No meeting today either. Okay I thought. Maybe this meeting wasn't meant to be? But not wanting to be swayed by interpretations related to fate, I plowed on in my very Western achievement-goal manner to see about a meeting the day after, which was also our last day. She texted me eventually (after half a day went by) that we could meet at the airport which is near Stone Town. I told her we were leaving the hotel at 5pm and would be leaving the island by 9pm. Our meeting was supposed to be at 7pm. Of course after two failed tries, I did have a hunch that this wouldn't work out and it already meant no Stone Town, but used to academics keeping their word, I assumed we would eventually meet up. By the time I was at the airport there was no sign of her. Huge crowds made me wonder how she had expected to find me. Just before we boarded the plane, she sent me one last text. She had apparently come to the airport at 5pm (the time I wrote her we are leaving our resort) and thus had missed us again.

Chagrined and humbled, I realized that maybe she never had meant for us to meet. I faced the possibility that I had misread local culture. It could well be that my reaching out to her necessitated her response in a positive way. If I made the effort to contact her she would make the effort to respond. But maybe not ever really believing she would see me, she was just being polite. Of course I will never know unless my curiosity gets the best of me and I try another trip to Zanzibar. "Never meant to be" suddenly seemed like a really good explanation.

Today I read about Stone Town in the New York Times, prompting me to write my tale of woe. The article praised the town as a place of intriguing small streets and great shopping for African sculptures and paintings. I thought how elusive reality really is. Whose version was correct? What actually is Stone Town? Was it the backwater town disparaged by the Israeli tourists we met? Was it the home of the Arabian princess full of intrigue plots and dramatically? Was it the town of exciting new smells and sounds praised by the New York Times? And did my colleague ever want to meet me?

I thought about research I once came upon which found that people actually enjoy the preparations for a vacation more than the vacation itself. In the preparation stage we can fantasize whatever we want. Every destination can be the best ever and reality is rarely as wonderful as our imaginations about the reality. Stone Town will probably forever remain such a mirage for me. Just as I will never know if my colleague really ever wanted to meet me, Stone Town will forever be what I make it to be. From this vantage point I can choose to see it as the fascinating city described in the Times or as a third-world village teaming with poverty and dirt. It will forever remain my choice.