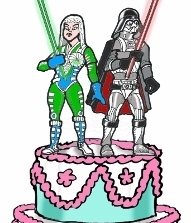 It has been said that every marriage is a mixed marriage.

Knowing as we do that men and women are from different planets, every intimate relationship between a man and a women can better be understood when seen through the lens of "Star Wars". We have two different species trying to make contact, an attempt that guarantees a great deal of misunderstanding, conflict and even sometimes all out war.

On top of the male-female differences, we also know that each family is unique and different from other families. Each family can be seen as a kind of mini-society with its own customs, its own history, its own stories and its own sense of togetherness. When two people marry, each of the partners actually comes from a different mini-society and their task is to try to set up a new mini-society of their own. Each sees their family's way of doing this as the natural way.

Shosh and Dani are a young couple planning a wedding. Both are born in Israel of parents from European backgrounds. Shosh wants to have a wedding that includes all her relatives but Dani wants a wedding that has few relatives and mostly friends. Without realizing it, they are both expressing loyalty to the norms of their own family. In Shosh's home, relatives were the major social group, and these relatives were usually also the friends as well. In Dani's family mini-society, relatives were relatives and friends were friends—and in his family social events were mostly around friends. Whose norms and rules will prevail? Who will have to give up the way they do things and learn a new way? Will the wedding look like a wedding of Shosh's family or of Dani's family?

While the popular myth is that opposite attract, sociological research actually shows that people are more successful in marriages the more the partners are alike. But today more and more people look for shared deeper characteristics than shared ethnic backgrounds—attraction, love, respect, similar attitudes to life, being able to have fun together, a mutual wish to have children, a good sex life. The question then becomes how do ethnic differences in mixed marriages affect people's effort to meet these goals?

For example, take Sandi and Dudi, a couple in their 40s who are on the verge of divorce. Sandi was born in France and brought up in Israel by French-speaking parents. An only child, she was the center of their world, and since the family's relatives had died in the Holocaust, the three of them had a very tight system without any extended family. Dudi on the other hand was born in Israel to Algerian parents who came to Israel together with their entire extended family. Dudi himself is the last son of ten children, all of whom are in constant contact with each other to this day. The culture of Sandi's family fostered real intimacy and closeness between one another, and also the exclusion of other people. Dudi's family on the other hand, never went in for deep conversations with one another, but spent their time in large groups having their kind of fun participating together in picnics or sports.

Sandi and Dudi met in France where they both worked for several years. During those years they had only each other, and since they were both in Europe they both acted like Europeans. This fit Sandi, who really was from a European country and it fit Dudi who felt he was learning sophistication about how to manage in the wider world. When their children were born they realized that they wanted to raise them near their families and in their own country.

Their return to Israel was undertaken without talking about what they would face—which was actually very naive. They gave no thought to the fact that their return to their families and the ethnic culture of their community would quickly destroy all the similarities they had created between themselves.

The norms of our families and our ethnic groups are unconscious to us – we learn them as tiny children and we learn them as "that is the way everyone is". They are virtually invisible to us, but very blatant to an outsider. So, right away it was obvious to Sandi that Dudi's family was very different from her own. She saw that Dudi's family expected her to either host them every weekend or go to them every weekend. Right away it was clear that at these large family gatherings, the women did all the work and the men chatted and played ball. To her, this was primitive behavior and she had no intention of becoming one of them. Dudi didn't understand what the problem was, since to him the family's way of doing things was totally natural and he couldn't imagine another way.

On the other hand, Dudi immediately realized that Sandi's family was alien to him. Sandi's parents always wanted to be alone with the two of them, and wanted to take the young couple on quiet weekends to hotels which they could afford to finance. For him, this meant being away from his large family. Sandi had been brought up this way and wanted her children to know the joy of country vacations. In Sandi's family, the whole idea of the weekend was that no one had to work, food was served and the family rested. While Dudi expected to be surrounded by his huge family and be served by the women of the clan, Sandi expected solitude and spoiling!

I have described just one ethnic culture clash in this relationship. There were thousands of such interactions in their marriage, in which each had totally different expectations from family life. Sandi expected that the couple would be the most important relationship, while Dudi placed all his affections on the children and the extended family. Over time Sandi learned that all of Dudi's brothers had girlfriends outside their marriages, and that the wives had accepted this as part of the deal. Sandi had expected to continue the intense romantic intimacy they had enjoyed in Europe, while Dudi wanted to return to a more familiar patriarchal model of his ethnic group. The marriage was finally over when Dudi began to go out in the evenings with his brothers. Sandi realized she was heading in the direction of the traditional wife, putting up with her husband's affairs.

Paradoxically, some of the best marriages I have seen have been mixed marriages. While research in Israel says that when husbands from traditional patriarchal countries marry modern Western women, the risk of marital problems is especially high. But I have also seen that it is exactly in those high-risk situations we sometimes find relationships that are particularly strong. For example, a university professor from Australia whose husband was from an Iranian family has managed to move past all the differences that could have toppled their marriage. They have negotiated roles in the family in which he stays home when she is off on a trip and she visits and takes care of his elderly parents.

What has to happen to make such a mixed marriage a success?

In a happy mixed marriage, each partner tries to give the other something of his or her own culture, so that both feel that their backgrounds are respected. We can look at the meeting of West and East as having a bit of what each of us needs. The Western cultures stress individuality, achievement and the importance of the self rather than tradition. The Eastern cultures stress togetherness, family harmony and respect for tradition rather than individual nonconformity.

Instead of "either/or" where the struggle is which culture will prevail, a couple who succeeds actually has a "this/and/that" philosophy. They take the best from both cultures and create a mix that is especially strong and healthy—a marriage with individuality and commonality, the self and tradition. When we think about it, this might be viewed as the principle of any successful intimate relationship, since there are always huge differences between the partners.