Zvi Relates His Struggle to Survive 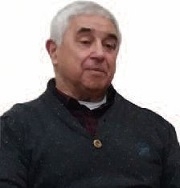 Members and friends of ESRA Haifa were treated to an outstanding talk by Haifa resident, Zvi Friedmann.

In the filled-to-capacity hall at Bet Hecht, Zvi told us, very emotionally, the story of his life, which began three weeks before the outbreak of the Second World War in a small village of Slovakia, which was later given to the Hungarians.

At a very early age Zvi contracted Polio and lost the use of one leg. He had to be carried everywhere as he just could not walk. The Hungarians and the Germans made life for the Jews very difficult and for a few years Zvi grew up there with no regular food and no regular life. By 1944 all the Jews were already being sent by trains to the concentration and extermination camps. Zvi, his sister and his young aunt were sent to the Ghetto in Budapest where they survived the war. They later literally walked to Prague, were put on a train to Holland, and then flown to Scotland to undergo a series of medical tests before they were accepted by an orphanage, which was the home of a rich English Jew, where they would be looked after., There, life became much easier and they had more and better food than the general population because of food parcels sent by the Joint organization. Zvi learned English and had twelve years of good English schooling and education. He then made aliyah and had to learn yet another language - Hebrew. For three years he studied physiotherapy at Assaf Harofeh Hospital and continued post-graduate work and studies in several leading hospitals in England and America.

On his return to Israel, Zvi settled in Haifa with his wife Pamela, and started and managed several physiotherapy clinics in the city. Although officially retired, Zvi, who is an expert on Laser therapy, is still working today.

He has many hobbies and interests. He has written several short stories, two books, and lots of poetry. He also collects Byzantine coins, and was an international lawn bowls player.