Writer Discovered the Good in Jews 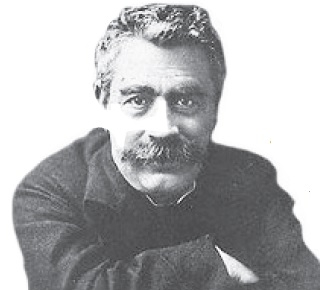 Everyone loves a good story. Yud Lamed Peretz wrote many of them. I've had the pleasure of reading a few aloud to the residents of the nursing home in Chicago where I volunteer. They are always warmly received.

Y.L. Peretz is all but forgotten today but I loved being taught his stories when I was in Hebrew School. Peretz was steeped in the Jewish tradition and he loved the people he wrote about. Also, there was always a moral at the end of the story that one could apply to one's own life.

"If Not Higher" is one of my favorites. A Hassidic rabbi is rumored to ascend to heaven during the days before the High Holidays because he is never seen at the early morning slichot services which precede them. A dubious Litvack decides to find out the truth.

Hiding under the rabbi's bed he observes the rabbi awaken in the middle of the night, don peasant clothes, and tuck an axe under his belt. "Is the rabbi a man of God by day and a brigand by night?" he wonders. He follows the rabbi into the forest where he sees him cutting firewood to bring to a poor forgotten elderly woman who lives alone in a hut. As he lights the fire to keep her warm he quietly recites the slichot service to himself.

When the Litvack returns to town the rabbi's disciples ask him if he is now convinced that the rabbi ascends to heaven. "If not higher," is his reply.

Y.L. Peretz was born in Zamosc, Poland, in 1852. He was highly respected in the Jewish literary circles of his time. Although his first stories were written in Hebrew, he subsequently wrote in Yiddish so that the simple folk could read his work. Deeply involved in the Jewish cultural life of his day, he was known as an author's author encouraging a new generation of Jewish writers. Peretz died in Warsaw in 1915.

"The Treasure" is another of Peretz's gems. A poor Jew prays for divine assistance. Almost immediately he sees a coin on the ground, but it's Shabbos and he can't pick it up. When he approaches the coin for a closer look, it skips away, and when he moves away the coin playfully, or is it temptingly, or perhaps maddeningly, follows him.

He can think of nothing else all day long but does not give in to temptation. At Sabbath's end, when he goes to look, the coin is still there and, miraculously, so is a treasure trove of gold coins. The Jew is rewarded for his piety with great riches.

It's not that Peretz never found faults with Jews, it's just that he chose not to dwell on them. In his famous short story "Bontshe the Silent" he chides us for the maddening meekness he discerns in us, but for the most part his emphasis is always on the good.

"The Three Gifts" is a perfect example.

A Jew has died but his soul cannot enter heaven because his good deeds do not outweigh his bad ones. The attending angels decide to give him another chance. They send him back to earth to bring them three worthy gifts. It takes a very long time but the soul ultimately succeeds.

And what are the three gifts? The first is a small piece of earth from the Land of Israel which is, ironically, the most precious of all the possessions of a very rich Jew. The second is a blood covered pin which a young Jewish woman uses to preserve her modesty in the face of a cruel and undeserved punishment at the hands of the Christian community. The third is a torn head covering which a Jew stops to pick up knowing full well it's at the cost of his life. Worthy gifts, indeed, the angels concur and the soul, now more ennobled and enriched, is allowed to enter heaven.

Y.L. Peretz lived a long time ago. His greatness was his ability to discern the good in the Jews among whom he lived and to write compassionately about them. Wouldn't it be wonderful if in today's Jewish world we had someone in our midst who would do the same for us?