When Parents are No Longer Around 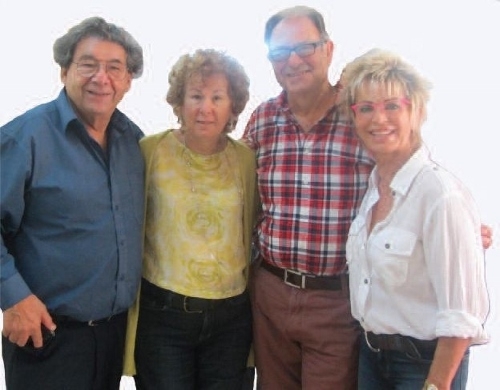 At the seminar in Raanana ... (from left) Maurice Collins, Sandra Rosen, Ralph Rosen and Janet Benjamin.

ESRA Seminar for families of children and adults with disabilities

The seminar was held in Yad Lebanim Raanana on November 16, 2014.

Maurice Collins, who lives in London, contacted ESRA and told us of the charities he set up in London. He works together with parents and siblings of children with disabilities. He has a daughter aged 54, and for 50 years he and his late wife had been working tirelessly together with many groups of parents to make sure that long-term care and finances were in place for their children after they were no longer here. With this in mind he set up a number of charities. He felt that he wanted to bring this concept to Israel.

I took on the organizing of this important seminar and felt that we needed to find out from Israeli families and professionals just how the system works here.

Maurice spoke of his work in the UK. What he didn't mention was that he had received the OBE for his lifelong work. He is incredibly modest, even though he raises many, many thousands of pounds for the four charities he started in the UK.

He came especially from London together with a group of his friends for the seminar.

I invited Lihi Lapid, the well-known author and wife of Yesh Atid leader Yair Lapid, to speak – they have a daughter with severe disabilities. From our first conversation she said that she wanted to be involved. She told her story from the heart and it was very moving.

Alex Daubly spoke about his daughter and the fact that he had made aliyah from Manchester UK. After researching and finding facilities in Israel to be of a higher standard for his daughter than those that were available in England, Alex and his wife Michelle felt they needed to ensure that their daughter was cared for now and in the future. In Israel they found the Aleh organization in Gedera, where their teenage daughter is now in residential care. At first they had care at home and then realized that together with their other children, the family needed to be able to live a 'normal' life. This way their daughter is very well looked after, and has friends and the loving care of Aleh. Alex and Michelle visit their daughter every week and are delighted with the love and care she receives.

We also had two social workers speaking and answering questions. Yosefa Harpaz is a clinical social worker and the Coordinator of Rehabilitation and Autism in the Department of Welfare and Social Services in Raanana. She also serves as a probation officer for people with disabilities, safeguarding their welfare, needs and rights.

Also speaking was Robyn Kanichowsky, who holds a Masters degree in clinical social work, MSW from Bar Ilan University, as well as a BA in psychology and social work from the University of Witwatersrand, South Africa. Robyn has worked extensively in the Israeli welfare system and for the past nine years has been employed as a family social worker specializing in rehabilitation.

There were many professionals in the audience who felt that the seminar was of great importance. The rest of the participants were people who had a family member with a disability, and they were very interested in what the speakers had to say and were extremely vocal in their responses, asking many questions. Quite a few had experienced great difficulties over the years.

Some of the audience spoke about the possibility of starting self-help groups; I mentioned that ESRA would be happy to accommodate anyone who wanted to take this further. I am waiting for further developments.