Apr 16 Posted by ESRAmagazine in February 2017 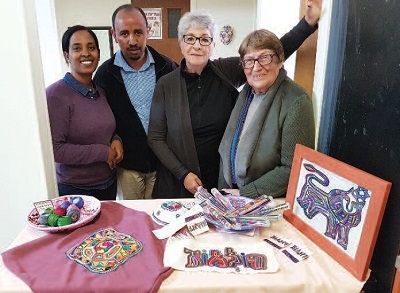 Retirement home care so special at this difficult time

To the staff at Beth Protea,
We are so very grateful for all the devoted, selfless work that you do at Beth Protea, specifically in the way you looked after both our parents, Jack and Mavis Wolff, during their stay in your lovely home.
All of you at Beth Protea are so special in the kind and caring way in which you deal with the elderly, the constant aging to the finality and eventual passing on. Essentially dealing with the end of life including all that it entails. The passage of life is a part of your job, and you all do it so admirably and with such kindness. It must be so tough at times, yet you bounce right back with an optimistic smile at all times. Beth Protea was prepared for the very last day recently with our own mother. We were aware that there was some preparation done behind the scenes ahead of our mother's final day, as much to our surprise, you were all ready for us. It really made things so much easier for us - the three brothers. Everyone at Beth Protea was on top of their game, which was of great comfort to us.
Thank you all so much for everything you did. We will always be deeply grateful.

We humbly say "THANKS".
In appreciation
Adrian, Lucien, David Wolff

Memories of professor who put me on academic map

I read with great interest Gita Gordon's review of The Reb and the Rebel: Jewish Narratives in South Africa (ESRAmagazine 187). I have not yet had the opportunity to read this story about the Schrire family's journey from Lithuania to South Africa at the end of the 19th century, but Ms. Gordon's sensitive review kindled some fond memories of the book's principal editor, Dr. Carmel Schrire.

In 1982 I was a young graduate student in anthropology at the University of Pennsylvania, freshly returned from two years of fieldwork among several remote jungle tribes on the island of Borneo in Indonesia. One night, as I was sitting in my drafty West Philadelphia apartment, writing my Ph.D. dissertation, I got a telephone call from a woman who spoke English with an accent I had never heard before and which I frankly could not identify. Later I learned it was South African.

The woman identified herself as Professor Carmel Schrire, said she taught anthropology at Rutgers University in New Jersey, and informed me that she and I needed to sit down together as soon as possible and, as she put it, "have a little talk". There was, of course, no Internet then, so being able to Google this lady was out of the question. I made a few phone calls though, and found out that she was indeed a professor of anthropology at Rutgers and an expert in prehistoric archaeology, Australian Aborigines, and the impact of European colonialism on native peoples.

Then, as now, hot-shot professors do not come to see obscure graduate students; obscure graduates go to see hot-shot professors. I took the train to Princeton, New Jersey, where Professor Schrire lived. Upon my arrival, she told me she was editing an anthology of articles about nomadic hunters and gatherers, had heard about the field research I had just completed in Borneo, and wanted me to write something for the book.

So just like that—or "badda-boom-badda-bing" as they say in New Jersey—I found myself on the academic map. Before I had even finished writing my Ph.D. dissertation or gotten my degree, I was published in what was to become a quite influential book in anthropology, Past and Present in Hunter Gatherer Studies (Academic Press, 1984).

I am delighted to see that Dr. Schrire is still around, still working, and now focusing her attention on the fascinating history of her own family. I can't wait to get a hold of a copy of her new book.

Exercise that would help in lead up to operation

Four years ago my consultant recommended a (single) mastectomy for my precancerous diagnosis. I knew there would be a considerable degree of stiffness in the shoulder on the side operated upon. As a yoga devotee I exercised three times

a day in the weeks leading up to the op, loosening up my shoulder muscles, so much so that when therapy began to get me moving I was able to complete all the stages of the exercises from day one.

I wonder why this exercise is not an intrinsic part of the guidance offered to patients? It would be such valuable advice from breast-care specialists. And yes, I went back to yoga as soon as I could and have full and equal strength in both arms

just as I did before the mastectomy.

Moving bridge to embroiderers past

During Chanukah I had a very moving experience at the ESRA Sewing & Embroidery Center in Sderot. The chair of the Social Welfare Department, Dr Merav Moshe Godovsky, who is the founder of the Sderot and Ofakim Civil Rights project (see ESRAmagazine #187 Letters), saidshe had a visitor from the University of Addis Ababa - Prof. Ashenaf, the head of the School of Social work there. There is an exchange of students from here. He was meeting students from the Ethiopian community at Sapir, and she asked if he could meet our sewers and embroiderers - the older generation. We arranged a Chanukah party to which the Professor was invited. He was escorted by Amit Kitain, the community worker of the Civil Rights Center and a lecturer at Sapir.

Why was it so moving for me? Tali, the director, who translated from Amharit, said that the women felt it was a bridge to their past, and were so appreciative that the Professor from Addis Ababa spoke to them in Amharit. They were interested to hear about the changes that have taken place in Ethiopia since they left 25 years ago, - and he told them about the changes for the better.

He asked each one where she had come from, and they all told him about their villages, the life they had left behind, their journeys to Israel and their absorption here. They thanked him warmly and invited him to come again. I wish I had understood the Amharit. Judith, our student at the Center, videoed the event.

where he gave a talk in English about his work at the university - it was fascinating.

Keep politics in, not out, of the magazine

In ESRAmagazine #187 there is a letter suggesting you keep politics out of the magazine. I respect but strongly disagree with this line of thought. of course you could always state that the organization is apolitical and opinions and ideas of contributors to the magazine – whether in letter or article do not reflect the official magazine point of view. However, since most people in our country are deeply involved and with strong though differing opinions on political issues, it would be stifling not to enable our readers and writers to include these feelings from their writings.

We are all one family and created equal

Yesterday, January 6, a stone's throw away from where I live - Andromeda Hill - at 6pm we had a flamboyant, ostentatious, beautifully organized parade held by the Christian Orthodox Community in Jaffa. There were fireworks and speeches in Hebrew and Arabic expressing their appreciation to Tel Aviv Municipality which had made the parade possible, and speaking of the strong link between Jews and Christians in Israel.
The celebration of the New Year went well as people gave their good wishes to one another half in Hebrew and half in Arabic.
The Christian women, old and young, were dressed in European modern fashion, and so were the men, with neckties and white shirts. I was mighty impressed by the soul of coexistence that is also visible and clear in Jaffa and on the promenade along the seashore from Old Jaffa port up to Tel Aviv on Fridays, Saturdays and Sundays. This kind of coexistence between the Arabs of Jaffa and from all over Israel and the Jews is so heartwarming that it makes one feel that we are ALL ONE FAMILY.
Truth is, I believe we should move the Knesset to the promenade of Jaffa, and there will never be any fighting or bad-mouthing!
Remember: WE ARE ALL ONE - WE WERE CREATED EQUAL.