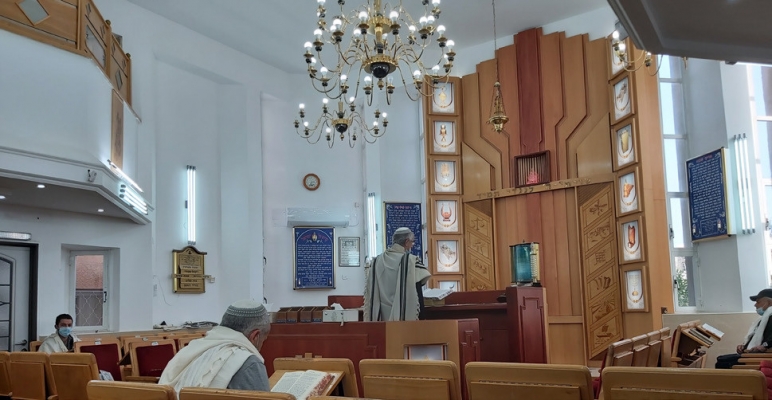 Shlomo Monsonego, praying in front of the altar in the Rachamin Synagogue, Arad

Story and Photos by Frank Mecklenburg

After my wife and I made aliyah in 2014, we chose to settle in Arad. We were told about the synagogue, Ben Zion, where we prayed for the first year in Arad. We walked the half mile to the shul. We enjoyed the fact that there were a number of English speakers attending. Some invited us to their homes for a Shabbat meal and the rabbis came to our new apartment for the purpose of mounting the mezuzahs to dedicate our home.

During that first year in Arad, I sometimes visited the Sephardic synagogue, Rachamim, located on our way to Ben Zion and closer to our apartment. Because of our age we decided to change synagogues. Though the synagogue had fewer English speakers, with our limited Hebrew we fitted in and felt very welcome. I was impressed with the aesthetics of the synagogue which were very conducive to worship. Many in the congregation are families who have lived in Arad for a long time. Each Shabbat I am warmly welcomed and given an Aliyah on Shabbat and other days. Several worshippers help me to find the right place in my prayer book.

The shul has three main leaders. Shalom, who sometimes leads the davening and is always the one who chooses who will have an Aliyah on a particular Shabbat. He also keeps a written record of those who have an Aliyah. Pinchas, who almost always leads in some part of the prayer service; he is also the treasurer who handles my donations to the synagogue and writes up a receipt for me. 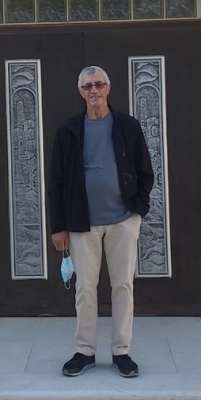 Shlomo Monsonego is the leader who caught my attention the most. He oversees the synagogue. He is faithful par excellence. Unless on vacation or not well, he is at every prayer service. When Shalom and Pinchas are absent, Shlomo takes over and decides who should daven. I am impressed that often some of his seven children, who are all active in their own various communities, come with their children to attend Rachamim. All his children were well taught because they are still sincere about their Jewish faith. They are mature, married, educated, have good jobs, and a family.

I began to ask myself, "What is the story behind this special person?"

Shlomo Monsonego was born seventy one years ago in 1950. He was eighteen, when he with his parents, six brothers, and two sisters made aliyah to Israel from Morocco in 1968. Shlomo's father was a shoe salesman in a large store in Mekness, Morocco.

His parents and his siblings decided to leave a comfortable life in Morocco to make aliyah to Israel because they, like all the Jews in Morocco, dreamed of living in Israel. That was their heart's desire for months and years. It seemed like the natural thing to do. Life was good for Jews in Morocco. Jews did not experience anti-Semitism and the government treated Jews well and were happy to have the Jews living there. They did not leave Morocco to escape from a difficult situation, but came instead because of their longing to live in Israel, the homeland of the Jews.

The first place the family lived in Israel was in Petach Tikva. Shortly after arriving in Israel Shlomo served in the Israel army for three years from 1969-1972 between the Six Day War and the Yom Kippur War.

After his army service, Shlomo enrolled in a course in Tel Aviv to become a professional in the aircraft industry. He had no idea that this would lead him to the young woman he would marry. What happened was that the bus that picked him up for the class also stopped to pick up other students for the same class. One of the people that the bus picked up each day was a beautiful young Jewish woman, Shoshanna, also from Morocco. She more than caught his attention because they married shortly after that.

When they finished the course in Tel Aviv, they moved to Arad in the Negev. Shlomo told his wife, Shoshanna, that he strongly felt that they should settle in Arad for work and to raise a family. Shoshanna had not traveled that far from the Tel Aviv area and did not even know where Arad was located. They moved to Arad in 1979 with their first child, a daughter. They have been in Arad ever since and raised their seven children there. They now enjoy visits from their grown children and 19 grandchildren.

Shlomo is happy that their children are strong in their Jewish faith and are leaders in their respective communities davening, reading the Torah, and raising their children in the Jewish faith. In fact, he is so happy that he asked his wife, "Because I am so happy with our children, why did we stop with seven children?" Shoshana told him the reason was that she was 42 when the last one was born. He credits the success of his children to his teaching them in the home and what they were learnt in Hebrew school and the yeshivas.

Shortly after settling in Arad, Shlomo recognized a need for a Sephardic synagogue closer to their neighborhood area because of the walking distance to the closest Sephardic one. When Shlomo started the new Sephardic congregation, the first Shabbat minyan met in the Jewish elementary school Tlalim on Shimon street near where they obtained property from the city for building a beautiful synagogue in 1990 that is still going thirty-one years later.

At first, they were busy building tables and chairs for their services. They needed a Sefer Torah scroll, but did not have the funds for buying one. Some Jews from the city of Lod who were on summer holiday in Arad, learned of the need for a Sefer scroll for this emerging congregation. They arranged to loan them a Torah scroll and also chairs and tables. Eventually the shul purchased their own Torah scroll. Over the years they purchased five Torah scrolls altogether - three are in the Ark of Rachamim, the fourth has been donated to the hotel for prayers there, and the fifth was donated to Tlalim school.

When they started meeting in the new synagogue, so many people came that they had to put extra chairs inside and outside like what is needed for Yom Kippur. Of all those who started the synagogue, Shlomo is the only one left who still lives in the neighborhood and continues to lead the community.

The community of the synagogue is friendly and family-like. The people enjoy being together. Everyone pitches in and helps with all the prayer services and other activities. This is the reason a building for their social gatherings adjacent to the synagogue was built six years after the synagogue was completed. It has a kitchen and is used for special synagogue dinners, wedding feasts, barmitzvah celebrations, and more. It has also become a popular place for other communities in the city to rent for their special occasions. It is very conducive for the family-like atmosphere of the Rachamim synagogue.

While there are various Jewish Orthodox groups in Arad, Shlomo is happy to be a Sephardi Jew. People from many different countries including Morocco, Tunis, Algeria, and India attend his Sephardi synagogue.

Shlomo worries about how to keep the synagogue going the way it has for all these years. He really does not see anyone ready to step into his shoes. Currently he shares the leadership with Pinchas and Shalom. The three think alike. Because they understand each other so well, Shlomo does not feel that he is the main leader, but that together they decide if an idea is good or bad.

Shlomo and Shoshanna are a special couple who exhibit a wonderful character that is proven in the lives of their children. Shlomo also served on the city council of Arad for ten years. He is well respected in the community and is a wonderful example to young Jewish fathers in Israel.