Typhoon blew in just as we reached Sar El base 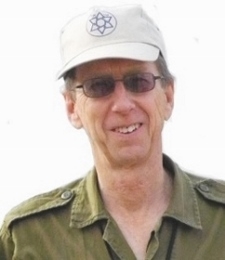 David Smith on the Sar El base in his uniform

Since my retirement a few years ago, I have had the joyful experience each year of volunteering for Sar El, helping the Israel Defense Forces (IDF). This year was no exception.

Sar El is a Hebrew acronym meaning "Service for Israel". Thirty six volunteers, including myself, showed up for duties at a base in the center of the country. This particular base is tasked with providing up-to-date medical supplies and equipment for civilian and military emergency situations in Israel and overseas. As this is a continuing need, it is the only base that requires volunteers on a year-round basis.

We arrived at the base just as Super Typhoon Haiyan was hitting the Philippines, affecting over 13 million people more than 670,000 of whom lost their homes. The well-oiled operations of the IDF had already kicked into place so that they could provide aid to the archipelago. Our task was to pack up supplies and equipment so that they could be shipped there, and to replenish goods taken from stock. We did this in concert not only with the military and civilian staff at the base and the civilian supervisors, but also with a large number of newly-recruited medical women soldiers who had been diverted from their scheduled basic training at another base to support this effort. Within a very short time this disparate crowd was working well together towards our common goal.

Approximately 100 tons of humanitarian aid and medical supplies was sent out to support the 147-member group of senior doctors in the IDF medical corps and national search-and-rescue unit officials. In addition to delivering a baby whom the grateful mother named "Israel", the delegation also performed 60 surgical procedures, was involved in 36 births, and treated over 2,600 patients at the Bogo City field hospital. Four different schools were repaired and reopened and IDF psychologists provided mental counseling to local teachers. The delegation also worked towards establishing an infrastructure that would allow water and food to be supplied to the locals.

The conditions for volunteers are basic but adequate. Sleeping accommodation is in separate barracks for men and women, with up to six per room. Volunteers eat at the army cafeterias, along with the soldiers and civilians on base, where the food is simple, but healthy, tasty, plentiful and varied. Volunteers wear uniforms supplied by the army, and are expected to join in flag-raising each morning. Alcohol use is not allowed, political discussions are to be held only in a light and respectful manner and religious proselytizing is forbidden.

Most of the volunteers are in their 60s, 70s or 80s, with the oldest on record being 94. There is a simple medical approval process for entry and work is often allocated according to the individual volunteer's physical capabilities. The work varies according to the needs of the base to which they are allocated.

On our base, the work consisted of updating medical supplies and equipment so that they were in a position of readiness for military use or in the event of a natural disaster. (Recently, support was provided to Haiti and Japan). When supplies are close to their 'use by' dates they are removed and replaced by newer items. Often, drugs are diverted for use in local hospitals before their end-date, so that they are not wasted.

In contrast to my career's work as a civil engineer building roads, those of us on the base hoped that the results of our labors would never be used. 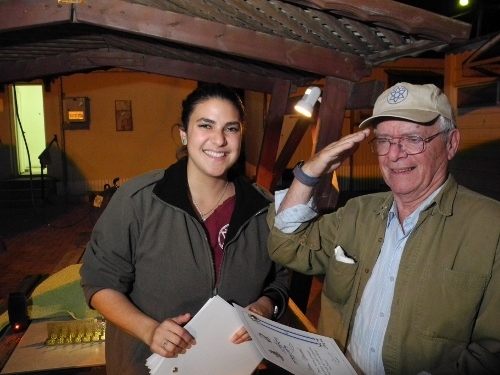 The work and activities of all volunteers are under the command of two counselors, young women soldiers doing their two-year stint of army service. Our two were amazing. They showed immense personal skills in looking after problems that were encountered, allocating work for us and running the evening programs.

I asked Hadas why she wanted to work in this program. She replied, with her face aglow, that it was what she had always wanted and that she had worked hard to get into the program. Shoshanna was equally good. She is a lone soldier (a soldier who comes from abroad to serve in the IDF without family) from Guatemala who helped with the Spanish speakers in the group. At the end of our program, she returned home to her family for a well-deserved month-long holiday, a benefit provided to lone soldiers in Israel. We were very happy to hear at the end of our program that Hadas had been promoted to be in charge of all the counselors on the Sar El program.

Israel Geva, the Executive Director of Sar El, met with us early on in our program. He discussed the critical situation with Israel's immediate neighbors with particular emphasis on the current concern about Iran attaining nuclear weaponry. He talked of the founding of Sar El and its 30 years of history. Prior to its creation, supporters of Israel had sent financial contributions, but the founder of Sar El, the late Dr. General Aharon Davidi, the former head of the IDF Paratroopers and Infantry Corps, recognized the need for "human" capital in addition. In calling for volunteers, he appealed to foreigners to also "send us your hearts". Within weeks of a recruitment drive in the US, the first batch of 650 volunteers arrived to support desperate agricultural needs. Realizing the merit of that action, these first volunteers expressed the wish for the project to be perpetuated in the military arena.

In 2012 more than 4,000 volunteered; no doubt an increase affected by those supporting Israel during the Pillar of Defense operation in Gaza. That year, volunteers came from 39 countries: 30% from the United States, 27% from France and 11% from Israel itself. In our particular group of 36, there were volunteers from Israel, the US, France, Belgium, South Africa, Canada and Mexico – a true United Nations working for a common cause.

Israel Geva also discussed the rationale of bringing volunteers to assist the IDF. It gives many people (both Jews and non-Jews) a chance to give their time here and to experience things in Israel as they really are. They can then return home to be ambassadors for Israel. Many youngsters come in the summer as an add-on to other programs such as Masa or Birthright, with some volunteers deciding to make aliyah after being on the program. He also spoke of the IDF's strategic alternatives to using Sar El volunteers: regular soldiers (who have other responsibilities), or civilians on a paid basis (which would use the limited financial resources of the IDF) or reserve soldiers (who would be diverted from their post-army careers). 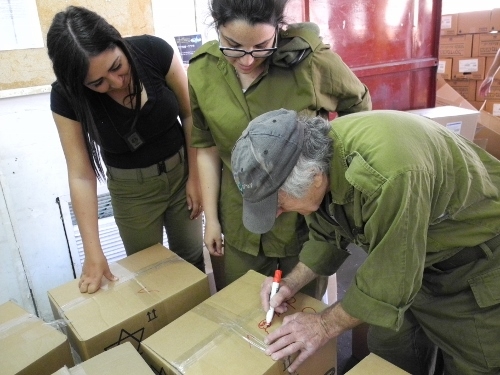 All is not work at Sar El. Evening programs (are organized and run by the counselors. These typically include outside speakers, quizzes and discussion on Israeli culture, inventions, authors, language or history, folk dancing and short movies on Israel. This year we were treated to a presentation by a lone soldier from Venezuela who had been assigned to a combat unit in the north and is now working in Israeli hi-tech.

We were taken on two half-day trips off the base to experience other aspects of Israel - notably our guided tours of the houses of Dr. Chaim Weizmann and David Ben-Gurion, Israel's first President and Prime Minister respectively.

Volunteers 'earn their stripes' early in the program and at the end are awarded certificates and pins in recognition of their contribution. After spending three weeks working, sleeping and eating together, we often formed deep bonds of friendship, which continued into future programs. The counselor, Shoshanna, thanked all the volunteers who come year after year, saying that it is truly an inspiration to the regular enlisted Israeli soldiers to see so much enthusiasm from those who do not have to serve in the army.

For more details on the program or to register, please refer to the excellent website: www.sar-el.org: The primary point of contact is: Pamela Lazarus, Program Coordinator.