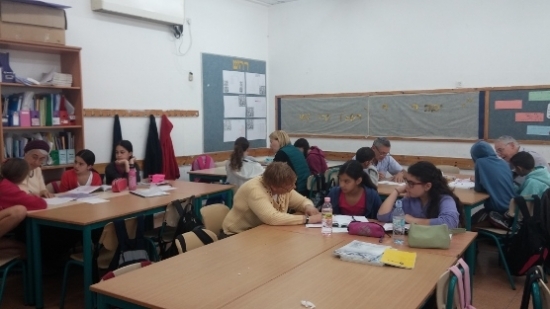 A class in session at Keshet Elementary School, Modiiin

ESRA Modiin school volunteer tutors initially worked for about four years with bagrut pupils in their final school year. While our volunteers were enthusiastic and plentiful, the program, which had started on a high note, started to limp for various reasons. The main difficulties we faced were in coordination and cooperation on the part of the schools themselves, as well as what appeared to be a somewhat bumpy and erratic schedule due to bagrut-year demands. Eventually, the program deteriorated so much that our volunteers were ready to throw in the towel, and many did.

We then did a major reassessment, having realized that if ETP was going to succeed in Modiin, we had to change gears and rebuild from scratch. So, through the mayor's office, a meeting was arranged for us with the deputy head of education in the city and Michal Nativ, the municipal coordinator of volunteers in schools. They suggested a pilot project with the Keshet Elementary School, which led to a series of meetings with the dynamic principal and the school's two English teachers, Alice David and Rochelle Cohen. All agreed that if ETP was to succeed, it had to be coordinated with and through the municipality.

The result of this preparatory work led to an outstanding year of ETP volunteering in Modiin due in no small part to Vicky Pilo, our fantastic coordinator, our growing number of 23 enthusiastic and able volunteers, , the school and the teachers, and of course the pupils themselves. So wonderful has the experience been that we are currently planning to expand the program for the next academic year.

"Never doubt that a small group of thoughtful, committed citizens can change the world; indeed, it's the only thing that ever has." Margaret Mead

The program pairs English-speaking volunteers from ESRA Modiin with the pupils in order to help them improve their English. Volunteers meet the pupils once a week, usually on a one-to-two basis. Each week a subject is suggested by the two English teachers, Rochelle and myself. Volunteers and pupils read texts, answer riddles, work on grammar and share ideas and thoughts on the given subject.

I remember the first meeting between the pupils and the volunteers. The pupils brought family photos and games. They were very shy and afraid to speak English. As time passed, we noticed that the meetings with the volunteers increased our students' achievements, their motivation and self-confidence. They felt more comfortable in expressing themselves and speaking the language.

We would like to thank ESRA and all our volunteers. You are the heart of the community.

From a happy ETP Volunteer

Take a group of enthusiastic and committed volunteers and a well-organized and highly appreciative school and the result is an extremely successful English Tutoring Program.

It was not just the pupils who benefited from the experience, but also the volunteers. Many were initially uncertain about how useful they could be, since they have limited Hebrew and have never previously worked with children. However, the smiles and greetings from the children as they ran towards "their" volunteer helped to overcome any inhibitions and the improvement in the children's skills was a wonderful reward.

ESRA member, Vicky Pilo, who liaised meticulously with both school and volunteers, deserves particular credit for the program's success. Well done to everyone concerned.