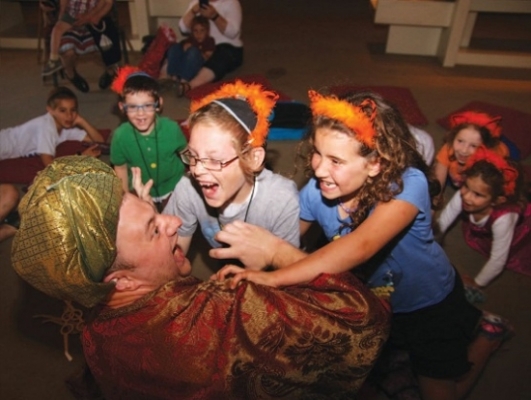 t is always a fun time during the days leading up to Purim.Kids get dressed up, parents join in and everyone smiles. But for some families, just having a fun time together as a family can be very challenging.It was this concept of providing afun experience for the family that prompted Caroline Shapiro Weiss and Rose Ginosar, of the Tower of David Museum in Jerusalem, to explore the possibility of bringing to Israel a program that has been successfully running in London in the Royal Academy of Arts and the National Gallery.The idea is aimed at opening museums to families who have children with special needs. The emphasis is on the whole family, not just the child with the particular need. This is the uniqueness of the program.

The Tower of David Museum is located at the Jaffa Gate entrance to the Old City of Jerusalem. In the beautifully restored citadel is housed the 3000-year-old story of the history of Jerusalem which is shown, as a permanent exhibition, in the guardrooms of the fortress. 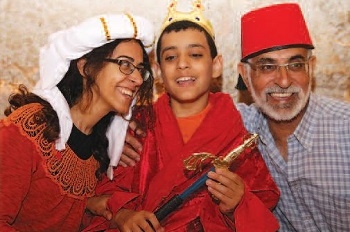 I was asked to go along to the opening evening on the Tuesday before Purim. I admit that before I arrived I did not fully understand the significance of this happening.

A few families had come early and were already registering.I mingled with them as we wandered amongst ancient archaeological excavations and down the winding paths crisscrossing the open courtyard of the Citadel landscaped with lavender and rosemary.  Amongst these fragrant bushes are green glass bulrushes, remnants of the exquisite Chihuli glass exhibition that was on display in the Museum in 2000. 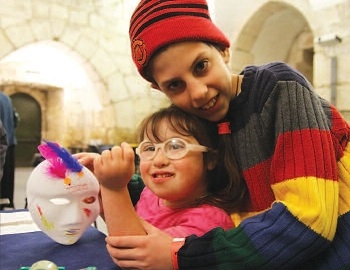 Two young boys, dressed up in their Purim crusader costumes(very appropriate for the setting), were running up and down the stone staircases onto the ramparts.I caught up with their mother and asked if she was enjoying herself."It's a dream come true,"she enthused."We have three children - the eldest, our daughter, is 14. Then we have two boys, both of whom are on the autism spectrum. We live in Petach Tikvah and have come especially today because we can come as a whole family.Usually one of us takes our daughter out and the other tries to entertain the boys. Here our adolescent daughter isn't embarrassed about her brothers' behavior and can mix with other siblings who are in a similar situation to her.There is plenty to interest us all and the staff is so patient and helpful."I left her happily climbing the stairs to see the magnificent panoramic view of Jerusalem overlooking the King David Hotel, the modern Mamilla shopping complex, Moses Montefiore's windmill and Yemin Moshe. 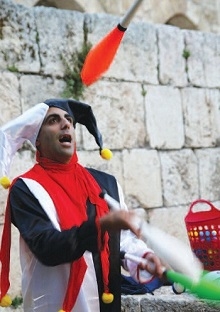 Up in the air ... a juggler entertains

The tall boy whom I had seen at the entrance was looking through a narrow slit in the walls that had been used for shooting arrows in the time of the Crusaders.A member of staff held his attention as he explained with enthusiasm all about the battles that had taken place on these walls.His mother told me that she had traveled from Beersheba just with him for this event. "It was also important for me to bring him here because we are religious and I wanted to show him Jerusalem." I asked her why she hadn't brought her other children too."All three of my sons are autistic and it would be just impossible to negotiate the journey with them all. I don't leave the house very often and I never make it to a museum, so for me it is just so wonderful."She gave me her cell phone and I took a picture of her smiling with the ramparts as a background.

Not all the special needs children were autistic. One family had brought their 20-year- old daughter who has Down Syndrome. "It must be at least 15 years since we have been to a museum with her," they explained."She tends to cry much of the time and it would be far too annoying for other people to be near her.Amazingly she has hardly cried today and it's just so wonderful to be out together, happily enjoying ourselves." 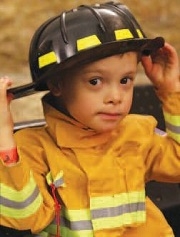 Wearing a costume for Purim

A juggler was entertaining a family of four young boys from Maale Adumim. "This is such fun," laughed their father."We rarely take all the family to a museum because apart from anything else it's prohibitively expensive -especially when we know that after about 10 minutes we'll have to leave because the behavior of one of our children will be disruptive.This event was heavily subsidized and cost the whole family only 20 shekels.Here all the families are in the same boat.It's so relaxing for us as parents.There is absolutely no pressure.There are not too many people and it's not too noisy.Our son is very sensitive to noise and can't be in crowded places.Here there is plenty of space and no-one is pushing.Being pushed is also very disturbing for him."

A family of Red Indians came to watch the juggler.And another family exchanged their Purim outfits for Crusader costumes provided especially for this event in a corner of the Crusader room, a room filled with fascinating details and exhibits.Everyone clicked their cellphone cameras to try to catch every smiling face and every happy minute.

Encouraged by the success of the Purim program, the Tower of David decided to provide another "Meet in the Tower" event during Pesach.I came back again to see new faces engaging in different activities around the courtyard and in the exhibition rooms. 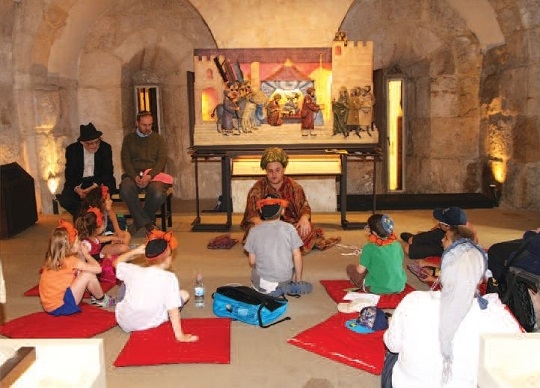 Once upon a time ... children sitting enthralled listening to a storyteller during Pesach

A family from Kfar Saba, parents and children,sat enthralled by the storyteller. I asked them if this was an "add-on" event for them at the end of a day touring in Jerusalem. "Not at all," replied the father. "The school holidays and the festivals are the hardest for us as a family as everyone else is out busy experiencing all the great things that Israel has to offer. But for us as a family, crowded places and lots of noise just don't work.So we have never done anything like this before. It's great to be doing something as a family and we have come especially to Jerusalem for this activity."

The setting sun began to cast its golden Jerusalem light.The atmosphere was totally magical.The Citadel, bathed in beauty, radiated its ancient history. Reluctantly I left, feeling exhilarated and now completely understanding the immense achievement of the Tower of David Museum.