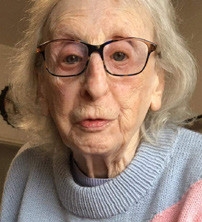 My lovely mother, Tova, nee Joan, died on October 10, from pneumonia, aged 91. She was a lovely, kind, and generous woman. I feel grateful that she was my mum. I couldn't have chosen better parents had I had a choice; I feel lucky.

Tova was born London in December 1929. She grew up in Brixton - the market end of Railton Road. Her dad was a market trader. She had a tough start including poor health. She left school at age 14 at her mother's insistence.

She met my Dad, Yoel, after WW2 and had a long, enduring love affair that only ended with her death today. They married and settled down in a tenement flat, their first home together, in Camberwell. Soon after, my brother, then I, were born.

With my Dad's support, Tova went back to study in her 30s. She qualified from the University of London with highest honors, equivalent to Cordon Bleu, in cookery. She took up a career in teaching and cuisine, including teaching A Levels, international cuisine to adults, and teaching hoteliers. She was a fantastic cook. For her, like her younger brother, Sid, cooking was not a chore. It was an art form. She excelled in all forms. No one ever turned down an invite to dinner, knowing they couldn't dine finer anywhere. She understood everyone's culinary needs.

Tova and Yoel moved to Israel in 1973, arriving in the middle of the Yom Kippur War. She opened a school here in cooking and taught in the state schools too. She made her own bread, pasta, ice cream, strudels and cheesecake, and became an expert in making three-tier wedding cakes. And she was an expert in French Cuisine and in freezing and defrosting food. We were fortunate to visit France a lot in my childhood and often my mother would disappear into the kitchens to see what was what, and chat with the chefs. She quietly analyzed everything we ate and reproduced it at home.

My mother was a very hospitable, kind and generous person: three short stories, two from my childhood, illustrate this. We had some builders working on the back of our house. It was a very hot day, and we were out. My mother announced we were going home. She had bought the builders ice creams and prepared them cold drinks. "I couldn't leave them with nothing in this heat," she later announced. One of the builders thanked me (me!) for my mother's generous thoughts. He wasn't young but said, no-one had ever done that before. Later, we returned home just as a priest was approaching our door. "I'm your new priest, and I'm visiting my parishioners," he said.

My mum told him, "Well we're atheists and if not that, Jews ... but would you like a cup of tea?"

"Oh yes", says he, licking his parched lips. I sat with him at the kitchen table whilst my mother prepared tea which was always more than just a "cuppa". The priest turned to me and said, "You know, your mother is the first one on this road to invite me in."

My chest swelled with pride at my mother's generosity. Later, in my twenties, I had a girlfriend who already had a little boy aged seven. My Dad arrived from Israel. I picked him up at the airport and he thrust a present at me.

"Oh, it's not for you," he replied. "Your mother has bought a present for the little boy."

She had never met my girlfriend or her son, but the first thing she did was buy him a present. That's my mum. Their houses in London and Israel always had visitors staying. They never turned away anyone. My friends visited regularly and stayed with them even when I wasn't there.

My mother wouldn't have necessarily called herself a feminist, but that's what she was. She thought women could do almost anything a man could do. She refused to be put down by men. She was the only daughter in a household of boys. She often got into trouble for refusing to do things that her brothers seem to be exempt from. Her brothers were large men, but my mother held her own, and gained respect for doing so. She was often one of the only women in debates in my Dad's East End circles. She wouldn't be patronized.

Tova wasn't religious but she was fiercely proud of her Jewish heritage. She didn't look stereotypically Jewish, whatever that is, with her very fair skin, chestnut hair and grey-blue eyes, even though her DNA turned out 100% Jewish. She told a story of how, when she was twenty, her work colleagues made an anti-Semitic remark about another colleague whom they thought was Jewish but was in fact Irish. My mother told them in no uncertain terms, how dare they say that about their colleague, and that it was in fact she who was Jewish, much to their embarrassment. They had thought my mother was Irish. My mother used to wrap herself up in a way to look "more Jewish" and then go to Mosley Fascist Meetings in the late 1940s/early 1950s. Asked why she it, she replied, "To have a fight, of course."

She was strongly anti-fascist and anti-racist like my Dad. She was into dignity for all people. That was part of her family's DNA. To treat all people with dignity and to be treated with dignity was more important for her than political rhetoric. When a neighbor in Israel from South Africa once told her that Black people weren't capable of doing something, she said, in no uncertain terms, "Wasn't that what Hitler said about our people?" She could not countenance such opinions in her presence. Judge people by their actions not the dint of fate of their birth. This was non-negotiable. Her view was "if you've got nothing nice to say, don't say it". She always dressed impeccably. I told her once how some of the Black London girls dressed incredibly "sharp". Tova immediately related to this. "Of course, like me and my (Jewish) friends. No-one was going to put us down!"

Despite this, Tova was mostly non-judgmental, and as said, generous, hospitable, and kindly. She had a ready easy laugh, beaming smile, and a disarming, understated wisdom. She was incredibly industrious, especially where cooking was concerned, and was a voracious reader like her mother. Her favorite author was Lion Feuchtwanger.

At the beginning of the pandemic, Tova had a series of mini strokes which gave her a condition similar to Alzheimer's. Last week, she entered hospital with pneumonia. I set about trying to get to Israel despite the Covid restrictions stopping entry to foreign passport holders. The Israeli and UK bureaucracies defeated me.