To Unify a Nation - Book Review 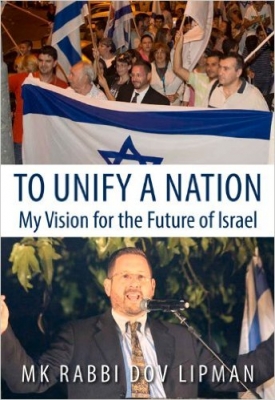 To Unify a Nation: My Vision for the Future of Israel

Maryland-born Rabbi Dov Lipman made aliyah twelve years ago at the age of 33 with his wife and four children, settling in Beit Shemesh. In this excellent book (his fourth), he picks out an assortment of his experiences in the intervening years, some exhilarating but some clearly in conflict with his core Jewish values. The book abounds with fascinating anecdotes about people he encounters and about his often courageous attempts to sort out their problems.

He tracks his personal emergence from "innocent immigrant to concerned citizen to community activist to political activist". Many will know of the numerous bridge-building campaigns on which Rabbi Lipman embarked when elected in 2013 to the Knesset, as he helped draw up legislation for drafting the ultra-Orthodox into military service, chaired a task force to help haredim enter the work force and facilitated dialogue between religious and secular citizens.

"People tell me that I am dreaming if I believe that we can create unity amongst the Jewish people in Israel," he writes This dream is what the book is all about - a cri de coeur for moderation and against polarization in our society. Believing that all humans are created in the image of God, his passionate appeal is for equal respect, dignity and compassion to be accorded to all. He urges legislation to ban discrimination across many cultural lines: against women, against Ethiopian Jews in the workplace: against Sephardic girls routinely rejected for admission into Ashkenazi-run schools and against African migrants. He discusses the conversion crisis, especially as it relates to Russian immigrants.

Whilst his father was being buried in Israel, he became conscious of what he describes as "religious coercion" when ultra-Orthodox members of the local burial society "politely instructed us not to go up to the actual grave", citing "customs of Jerusalem". Rabbi Lipman's protests were eventually heeded: he, as a male, was permitted to go closer but they would not relax the rule for females.

Contemplating how such a prohibition could devastate some who might not dare to resist, he realized the importance of the fundamental Jewish principle of being able to "choose" one's path in life – "bechira" – which had enabled Jews throughout history to worship as they chose "while not imposing their approach on other people's lives". He offers, as one example, an individual action prohibited today even though it has no negative effect on others, that of a woman wishing to wear a tallit at the Kotel.

Dov Lipman takes this idea of "religious coercion" further. He highlights issues such as those concerning marriage and divorce, or the use of public transport on Shabbat, or legislation prohibiting the sale of hametz during Pesach, or the sale of pork. He argues that in order to preserve the Jewish value of free choice and to preserve Jewish unity, it is essential to separate religion from politics. He even quotes former Chief Rabbi Eliyahu Bakshi-Doron's conclusion that "government-based religious laws only lead to hatred, strife and polarization".

There is a particularly hard-hitting chapter on the treatment of women. Amongst many examples, he considers overcrowding at the Kotel on the women's side of the partition – half the size of the men's side – and deplores the extreme difficulty for women trying to get close to the wall. He demands zero tolerance of discrimination against women in any form.

One of Rabbi Lipman's highest-profile campaigns was in his home town of Beit Shemesh where, a few years back, a small number of ultra-Orthodox Jews had, in one particular area, initiated a campaign which included women being forced to sit at the back of buses, removing images of women or girls from public posters or municipal leaflets, dictating how females should dress and violently blockading and intimidating pupils on their way to a religious girls' school.

He conveys his sense of privilege in having addressed those thousands who attended the subsequent Beit Shemesh rally, while tens of thousands more across Israel watched on live TV. This rally brought together groups covering the entire religious and political spectrum.

"I spoke about my love for all of my fellow Jews regardless of their affiliation, and how we need to work together to make our country great"...

From some politicians this might well have sounded trite: from this principled politician (who sadly lost his seat in the 2015 election because he was too low on the Yesh Atid list), it was undoubtedly sincere.