To Give is to Receive - The Essence of ESRA 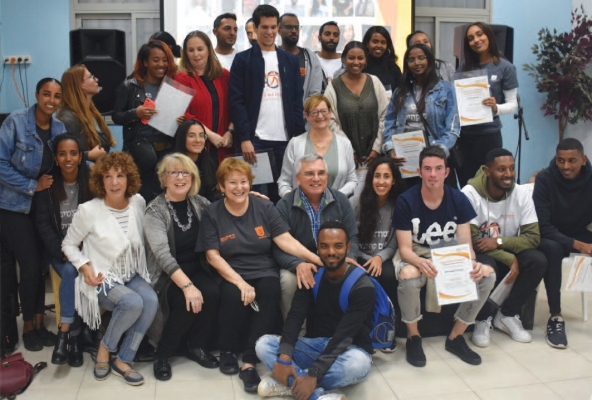 One for the album ... a group shot at the presentations
The hall at Hephzibah's community center was buzzing with excitement at this year's annual SBC - Students build a Community scholarship event.
ESRA's flagship project, SBC, celebrates its barmitzvah year of activities. Carefully chosen students reside in areas of severe deprivation, the rent paid by ESRA, in exchange for mentoring the kids on the block.
Project chair, Nina Zuck, welcomed the guests that encompassed donors, students, ESRA's chair Terry Morris – who expressed heartfelt appreciation to Nina – branch heads and representatives, coordinators and friends of ESRA.
This annual event, said Nina, had grown from presenting two or three scholarships in one of the student apartments to this evening – where donors are presenting 22 students with scholarships for the coming year.

Tarkin Adago, a student with the SBC project for the past three years, shared his story with the guests. Born in Ethiopia, he was six years old when, together with his parents and siblings, he left the small farming village where his father had toiled his piece of land to journey to Addis Ababa, in the hope of making their dream of aliyah come true. They waited two long years for their dream to materialize. Adago was 8 years old when he arrived in Israel. Sadly, his mother
died when he was 16. Adago has just completed a three-year course in Sports Education at Wingate College. He was a member of the Israeli National Athletes team that took part in the European Games, where he won first place in Athletics. He is now training for marathons. He is an outstanding role model for the youngsters he mentored.
Scholarship recipients are required to take on extra responsibilities over and above their mentoring hours. Orit Sabhat, a 4 th year Education and Society student at the Ono University, is in charge of 18 motivated teenagers from a depressed background, who are transported once a week – over a period of two years – to the Ruppin Marine Science Institute, where they enjoy a program of enrichment in Marine Sciences and Ecology. Participating in ESRA's Project of
Excellence – as it is named – they gain self-confidence and experience of team building. What is especially rewarding is that four of the 8 th grade participants are graduates of the SBC project –yet another ESRA success story.

Chaim Mamania, a 4 th year Law student at the Netanya College, is in his 2 nd year as a SBC student at Hefzibah. In addition to his mentoring, he works with the youth at the community center, ensuring that all events are coordinated between the center and the students. A gifted organizer, he is a real star.
Sigal, a third year SBC student in the Nordau suburb, has been running the "Little Women" project, inaugurated ten years ago when one of our students recognized the need for young girls to be given the opportunity to express their feelings in a safe environment. At that time she sought the guidance of her sister, a psychologist, who provided the concept.
Sigal explains that 12-year-old girls (specifically from deprived backgrounds) often find it difficult to speak about their concerns, even with their mothers. Sigal meets with ten girls once a week, where they each write their worries on a piece of paper which is placed in a box (without their names) and read out one by one for the group to discuss collectively; a form of group therapy, where sharing one's anxieties and finding others who feel the same is a safe way to
encourage and enable the girls to speak about their blossoming sexuality and relationship challenges in a warm environment.

Judy Argaman and Cynthia Yaakobi are ESRA's Volunteer Coordinators for the SBC project in Netanya. They have contributed greatly to making the project what it is today – an outstanding triumph for both students and the children they mentor. They called on the donors to present the scholarships to their specific student, giving a brief background on each scholarship recipient. Amongst the donors were Meira and Jack Applebaum who, apart from donating a scholarship to the student involved with ESRA's Project of Excellence, have been exceedingly generous donors to the project itself over many years. 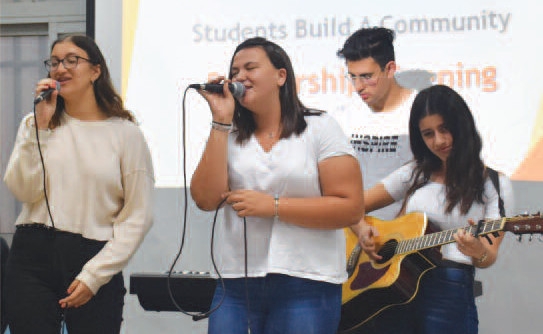 Two scholarships were presented on behalf of UK Friends of ESRA - the first by Juliet Rostowsky, in the name of Sir Sydney and Lady Lipworth, in appreciation of the two London fundraising events held in their home. The second was presented by Pamela Sarig, in gratitude to Maureen Lipman CBE, guest of honor at the September fundraiser.
Tribute was paid to Ilse Glukstad, whose outstandingly generous donation provides funding for four additional students each year, when there are insufficient funds to match the approved applicants. Ilse said how much pleasure it gives her to be able to contribute towards this amazing project that builds a better tomorrow for the students, the children they mentor and, ultimately for our beloved State of Israel.
Aside from the generosity of individual donors, it has been gratifying to note that in recent years, our branches have become connected to this project by donating scholarships in the name of their specific branch. It has proven to be an excellent way of promoting ESRA to the wider community. Herzliya, Modiin, Netanya, Raanana, Ramat Aviv and Tiberias all donated scholarships this year. In addition, ESRA Haifa and ESRA Karmiel are donating scholarships to
the newest SBC project in Acre.
The evening was enhanced by the showing of an excellent film on ESRA's projects, as well as musical entertainment provided by a group from the ESRA-supported Hephzibah Volume Center, inaugurated in 2014. The two singers, keyboard player, guitarist and drummer had the audience clapping and singing along. Local youngsters attend the center four days a week to learn to play an instrument, as well as to enjoy making music together.
It was an evening to remember, proving yet again that ESRA's greatest strength lies in the fact that it is a volunteer-based and volunteer-run organization. To witness an evening where joy was written on the faces of branch activists and individual donors bodes well for the future of our dynamic ESRA. For sure to give is to receive. 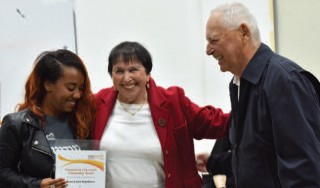 Meira and Jack Appelbaum with their student Orit Sabahat 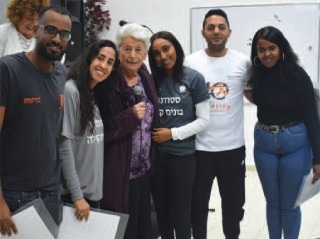 The one and only Ilse Gluckstadt presenting scholarships to her five students – Ashegere Aileen, Almog Munis-Geva, Helen Tronej, Eitan Shemi and Shlomit Simani 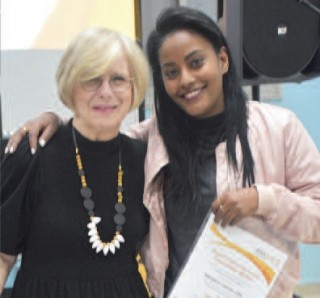 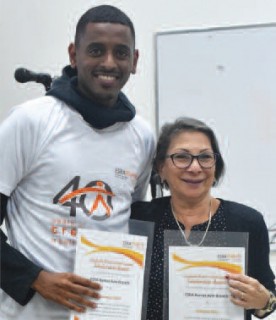 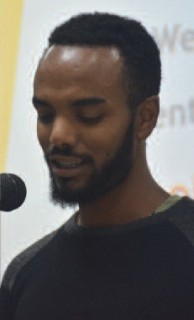 Tarkin Adago at the microphone telling his aliyah story 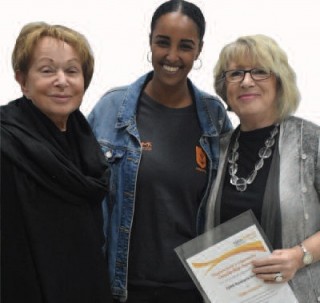 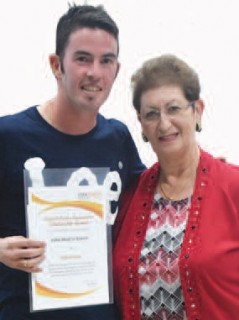 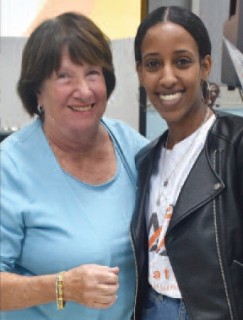