This Happened to Us 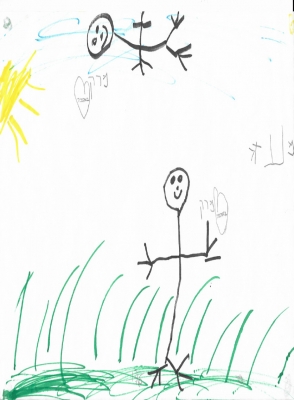 This Happened to Us is one book that Estelle Slevin wishes she'd never had to write. Exactly twenty years ago her son, Mark, died of leukemia after battling the disease for over nine years. He was just fourteen.

"One of our pressing needs was to know how to talk to our other children, at that most difficult time," Slevin, a speech therapist who is well-practiced in the art of communicating, remembers. Her older son, Chaim, was fifteen then, daughters Yael and Adi were nine and five. "We sat down together and spoke about how we would like to remember him; what we could do to feel his presence."

The Slevin children drew pictures – little Adi's sketch of Mark floating above her in heaven surrounded by love and hearts is enough to break anyone's heart – and told his favorite jokes. They baked cheesecakes, his most scrumptious treat; friends flew balloons over his grave. They prayed. And cried. And laughed. And together they somehow found the strength to put foot in front of foot and face the next day.

When a friend from abroad sent a book dealing with death and grieving, Slevin looked for something similar in Hebrew for young children, without success. Then, Mirik Snir, a children's author, happened to give a talk to a local school; Slevin listened with her girls. At the time she was the Supervisor of Communication Therapy at Beit Issie Shapiro; with funds from the American School, she opened a library at Beit Issie and invited Snir to speak to parents of children with disabilities under her care.

Then she shared her idea with the writer. Snir, who had coincidentally already written Ora, – a book to comfort her own grandchildren who were mourning their dead cat – was happy to create the text.

Twenty years ago publishing a book was prohibitively expensive; every publisher they approached refused even to consider a book about dealing with death. Eight years ago an E-book was published through Mendele Electronic Books, and then the project was shelved.

Years passed, and then decades. Self-publishing became more easily accessible. A friend visiting from Australia offered to do the illustrations: Aliza Friedman's moving hearts and butterflies and balloons light up each page of the deceptively simple story: how to celebrate a birthday of a brother who is no longer here. And, to mark twenty years since Mark's passing, This Happened to Us is now in print, at this point only in Hebrew.

At the moment Slevin is personally distributing copies to family and friends who sadly have need of it; future plans include printing more for grief counselors and professionals. Each beautiful page is another platform for memory; a moving moment of commemoration. As parents and their kids pore over the simple text – We celebrate the birthday of our brother who died / He'd want us to be happy even when we cried – they learn to communicate their feelings, and to cope.

We sang songs in the garden as the sun grew dim / And all the time we longed for him.

For copies of the book and more information: This email address is being protected from spambots. You need JavaScript enabled to view it.