The Worlds We Think We Know - Book Review 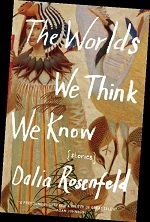 The Worlds We Think We Know

I am not a young woman. I have never been a young woman. And unless reincarnation really happens, I shall never be a young woman. I knew many young women when I was a young man, but my mind was usually focused on matters other than trying to understand their hopes and fears, their deepest dreams and yearnings, or their emotional perspective on day-to-day events.

I know many young women now, but they usually hurry out of my classes at the Open University, stopping only to smile and thank me for what they charitably call a "good lesson." My daughter is a young woman, but she does not talk to me about anything particularly deep. So my reaction these days to literature written by young women tends to be more academic than intuitive, more anthropological than literary.

That said, I sometimes happen upon a book like Dalia Rosenfeld's The Worlds We Think We Know and am nonetheless able to relate to situations, statements and feelings that, although written from a young woman's perspective, are nonetheless universal in scope.

In this her debut book, Rosenfeld presents us with characters dealing with the broad issues of looking for love—often in all the wrong places – exploring one's identity, sexuality, and capacity for love; assessing one's level and depth of Jewishness; immigrating to Israel; adapting more or less successfully to Israel and Israelis; retaining one's 'old country' values and expectations, and just navigating one's way through the maze of contemporary life.

Rosenfeld is a graduate of the Iowa Writers' Workshop. Her work has appeared in several publications such as The Los Angeles Review, The Michigan Quarterly Review, Fiction, as well as the prestigious Moment Magazine, and the even more prestigious, almost iconic Atlantic monthly. She presently teaches Creative Writing at Bar Ilan University and lives in Tel Aviv with her three children.

The Worlds We Think We Know is a collection of short stories, 20 to be exact. They range widely from New York to Tel Aviv, Ohio to Jerusalem, sketching the creation of 'new lives for old.' The characters are Jewish, living in today's world, in which Jews, perhaps more than most people, attempt to work out for themselves how to be happy, while living lives that they hope will somehow be meaningful. The stories are told mostly through the eyes of young women and a few seem to feature the same woman confronting the piano and musicianship at different periods of her life. Whether set in a small college town in the U.S. or the often lonely anonymity of big cities like New York, Jerusalem or Tel Aviv, the protagonist become almost an anti-hero in the traditionally understood sense, doing what she must to inhabit the sometimes harrowing world of personal relationships.

These are not stories that reach a narrative climax and conclude with an ending that would leave most readers tapping their chair armrests with satisfaction. Instead, the stories end inconclusively, without a fully resolved ending—in other words, just like real life. The writing, though, will satisfy anyone. One particular sequence that had me reaching for my pencil to underline the sentences reads, "I allowed myself to study Yair's face, the lines that converged around the corners of his eyes, the thick vein that bulged from his neck whenever he honked the horn. He noticed my gaze. 'What are you looking at?' he asked shyly, his mouth sprouting new lines, curved like the crest of a wave. 'A map of Israel,' I said, smiling back."

Rosenfeld's book is perhaps itself a map of Israel, the Israel of today and of some of the young people who live here