The Story of Ortal 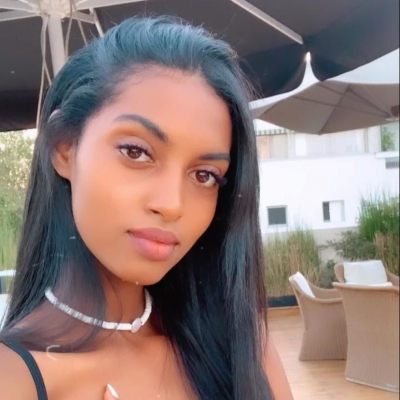 Ortal joined ESRA's Students Build a Community this year, as a student. She is mentoring a group of four girls in fourth grade in the Azorim neighborhood of Netanya.

Ortal is the fifth daughter after four sons in a family of 13 (11 children). Her parents emigrated from Ethiopia in 1991 with two children. Ortal was born in Israel. Her parents live in the Nordau neighborhood of Netanya.

Ortal meets today with ESRA for the third time.

"The first meeting was when I was in the eighth grade and joined the Project of Excellence at the Marine Science Institute in Michmoret, a project of ESRA. I remember how much I waited each week for Thursday when the bus arrived to pick us up for the visit to Michmoret. It was so unusual and different from anything that I had ever experienced. It was an opportunity I could not get anywhere else. Like an adventure that comes back every week - interesting studies and walking on the beach to attend workshops and in general, to leave Netanya. We had two students who educated us. I still remember their names. They took care of each of us. I have never forgotten this experience.

The second time I met with ESRA was when my younger brother joined the Students Build a Community project as a pupil. He started in the project last year and this year too he's participating and really, really enjoys it.

The third time - from the moment I was discharged from the army I dreamed of starting to study. I'm fulfilling both my and my Dad's dream. My parents did not have financial means but they gave their souls for us to learn. Dad accompanied me every day to school until sixth grade. All he wanted was for me to learn. For him the fact that I am a student today is one of his greatest dreams.

It was clear to me that when I enrolled in studies I would also apply to be accepted as a mentor in the Students Build a Community project. I really need my own place because at home there is no quiet place to study. And the project gives me an opportunity to fulfill myself and also to enrich and educate children like me and set a personal example.

I'm having so much fun today with my group of girls. These girls are me.

We have a close and warm relationship. They call me between meetings. I'm the big sister and I'm there for them. You could say that today I am fulfilling dreams and closing a circle."