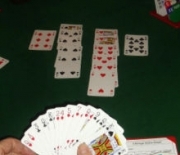 The semifinals of the Crime Writers' Association annual knockout teams tournament provided all the razzle-dazzle and top-notch bridge the fans had come to expect from the star-studded field.

In the first match, the fourth-seeded Chandler team inched out the defending champions, Dashiell Hammett's top-seeded "Maltese Falcons", on the very last board to win by 2 IMPs. The scores had been tied going into the last hand in which the Chandler pair bid and made 7NT in the closed room in contrast to the opposing team's successful 7♣ in the open room.

The second match between the second and third seeds, Spillane (Mickey Spillane, Cloris Leachman, Mike Hammer and Tiger Mann) and Christie (Dame Agatha Christie, Hercule Poirot, Jane Marple and Geraldine McEwan) threatened to be somewhat of a needle match because of the rather unkind remark Hammer had made to Dorothy Sayers on ousting her team in their quarter final match - "Farewell, my lovely" – and the ladies of the Christie team, with Poirot's full gentlemanly support, were out for some good old-fashioned feminine revenge.

Revenge was not easily come by, though. The Spillane team built up an early lead in the first half with some aggressive bidding and play in contrast to the more conservative approach of the Christie players. A case in point was board 2, Dealer East, East-West vulnerable.

In the open room, Cloris Leachman in the East seat opened the bidding with a super aggressive 2 ♦ - bridge purists may well shudder. Dame Agatha, sitting South opposite Hercule Poirot, realized that she was vulnerable on a diamond lead, wisely stopped short of a slam in 4 ♥. Spillane duly led the ♦7, and she was held to 11 tricks for a score of 450.

In the closed room, Geraldine McEwan passed in the East seat and Mike Hammer and Tiger Man rapidly reached a 6 ♥ contract, without giving away any unnecessary information in the bidding. Miss Marple decided to make the passive lead of a heart. Hammer drew two rounds of trumps and won three rounds of clubs ending in his hand and leaving this position:

The slam could only be made if Miss Marple had the ♠K and ♠Q or the ♠10 and Geraldine McEwan the ♦K, so Hammer now played the ♠7 and, when Miss Marple played low, inserted dummy's ♠8. Geraldine won with the ♠Q but that was the end of the defense. She tried fooling Hammer by leading the ♦J but he ducked and won the trick with the ♦Q in dummy, bringing home the slam for a score of 980, an 11 IMP gain for the Spillane team.

By the halfway mark, the Spillane lead had increased to 31 IMPs. "Farewell, my lovelies", chided Hammer with a laugh but the second half saw the Christie team nibbling away at the lead, reducing it to 7 IMPs with one board to go. The momentum had shifted to the Christie team and the pressure was now on Spillane. As was the case in the Hammett-Chandler match, it was down to the wire on board 32:

In both rooms, West dealt and opened the bidding with 4♠. North overcalled with 5 ♣ which was passed round to South who bid 6 ♥. In both rooms, too, Dame Agatha and Mickey Spillane sitting in the East seats prudently chose to pass South's 6 ♥ bid, thinking rightly they had a fair chance of beating the contract.

Both declarers received the lead of the ♠K. In the closed room, Mike Hammer instinctively covered with dummy's ♠A and, in a fit of pique at being out of a grand slam, flamboyantly discarded the ♦A from hand. Irrespective of the discard, even the small slam could now no longer be made!

Miss Marple was more circumspect. She saw no good reason to play dummy's ♠A at trick one as she anyway wanted to be in hand to draw trumps, so she played low and trumped in hand. The play of the ♥A now revealed the diabolical trump break. Nonplussed, Miss Marple drew another round of trumps and then set about demurely reducing the number of trumps in her hand to that in East's in order to execute a special kind of endplay in the trump suit known as a Viennese Coup: A club to the ♣K in dummy followed by the ♠A which she trumped in hand! Next she played a club to the ♣K and then led a club from dummy. Spillane, sitting East discarded a diamond - trumping would not have helped - and Miss Marple ruffed, She now won three rounds of diamonds ending in dummy and led a club. Spillane's last three cards, ♥J 10 7 were trapped in front of Miss Marple's ♥ Q 9 8 and he could come to only one heart trick no matter what he played. With that, the Christie team edged into victory.

The little old ladies had the last laugh after all.