The Kite Runners of Gujarat

Up and away ... flying in grace

Story and Photos by Anantha Krishnan

Kites fill the skies of Gujarat during Makara Sankranti, also called the Uttarayan festival. Uttarayan, the ascent of the Sun into the northern hemisphere in the tropics, heralding the beginning of warmer months. It is celebrated here in a unique manner and kites take prime time and are ubiquitous. The timing for this sport could not be any better as the skies are spotlessly blue and the breeze is exactly right to lift the kites aloft. The whole state shuts up shop and hits the rooftops.

On alighting from the flight in Ahmedabad, I am blown away by the colorful adornment of the entire Sardar Vallahbhai Patel terminal with kites. As the taxi speeds toward the city, a bit of craning from the window reveals a sky dotted with varying hues. Kites are not just in the skies, but are also in the hands of almost everyone on the street, cutting across age, gender and faith. Trees seem to flower kites during this time and the power lines are embellished with trapped ones. Billboards and bulletin boards carry kite designs and even the idols at the temples are decorated with kite-like ornaments.

Taking advantage of this fervor, Gujarat Tourism has been organizing international kite festivals since 1989, just for two days before Sankranti asthe day of Sankranti and the following day are altogether different.ballgame in town. Unlike the well-behaved polythene kites at the river front on the first two days, the skies during Sankranti and the day after are ruled by mean paper fighter kites that are out to cut anything and everything near them with the aid of ground-glass-coated manja string. 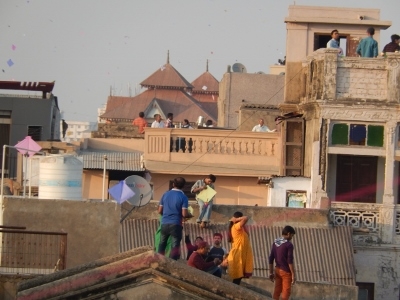 Up on the roof as the kite festival gets underway

The participants of the festivalare from kite flying clubs as well as individual enthusiasts from the world over. Some 140-150 fliers from more than 25 countries including the USA and Japan and from many different states in India unleash the strings.

The kite fliers need to be pre-registered to get in the arena. Revellers come in droves to the Sabarmati river front to take in the sight of kites of all shapes, sizes and colors, deftly manoeuvred by both Indian and international fliers. The kites include animal shapes, from teddy bears to dragons, floral and other intricately crafted designs, and some even carry social messages. An eagle-like kite was swiped at by a bunch of live eagles, causing a flutter among the crowd. Some kites are so huge that a team of ten or more is needed to handle them.

A tourism event like this is of course packed with food courts, handicraft shops, games for children, rock music shows and includes a Gujarat state pavilion. If one's legs get tired at this daylong event, the beautiful promenade along the Sabarmati river is the place to relax the muscles. Ahmedabad also has a kite museum where kites from 24 countries are exhibited. Gujarat Tourism does an excellent job of organizing this event with the same precision and care as they do for other Indian festivals like Navrathri and Rann Utsav, not surprising for Gujarat is one of the most progressive states in the country.

The breathtaking spectacle is best experienced from a pol - a self-contained neighborhood with clusters of adjoining houses, of the same family or caste, that has an open terrace, and is swathed in gated narrow lanes in the in the old quarters of the city. There are roughly 600 such pols still left in Ahmedabad, spared by the developers; they have an old world charm. As I wander through the pols, a Gujarati family invites me to their terrace top for a lifetime experience, something I had not imagined even in my wildest dreams. As I reach the rooftop, climbing four levels of dark narrow stairways,I see an unbelievable sight - the sky is a canvas of thousands of kites and colors and every single terrace is packed with people and the atmosphere is electric. The noise level, caused by the excited crowds and stereo speakers add to the mayhem. As my host family passes me the kites to fly, not a single one lasts more than five minutes as the criss-crossing manja of nearby kites cut the strings. There is a constant parade of snapped kites in the air, swaying in a flowing rhythm. Triumphant cries constantly emanate from those who are victorious in cutting other kites. Kite-fliers pay scant attention to these side attractions and are fully focused on their kites Such freebie kites have no appeal because families stock up on more than 300 kites of various sizes and more than 10 manja-spools for the two-day festival. Kids who run after cut-kites in other cities of India, have a field day here and end up with several kites each. The city has a massive cleaning job on hand as manja thread and torn kites are scattered all over the place.

The day on the terrace starts at 8am for the entire family, while friends and neighbors join in for group flying, thus making the occasion a social gathering. "It's a total holiday for us and we spend the whole day on the terrace," says Mrs. Parmar, a resident at the pol. A brief lunch break at noon includes Gujarati delicacies like Jilehbi, fafda, till-ladhu, chikkis and the traditional mixed-veggie dish made only on this day called Undhiyu. While the kites battle it out in the skies, a chai (tea) break is taken in the late afternoon. As the light starts to fade, a dramatic transformation sweeps across the sky - the kites' place is taken by thousands of Chinese lanterns that sail gently in the direction of the wind. The lit-up sky imparts a sense of surrealism, as we look up in awe. The traditional Tukkal or illuminated box kites, tied in series on a single line and launched in the sky have now given way to these relatively easier-to-handle Chinese lanterns. Fireworks too join in this galaxy of lights. 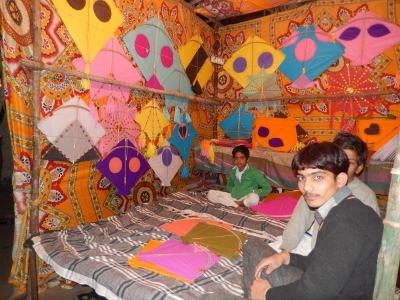 Inside a kite shop

When the line of lanterns starts to recede, it is time to crank up the music and shake the legs before calling it a day. The day after Sankranti follows a similar schedule but with more gusto, more kites and more lanterns as it is the last chance to exhaust the stocks on hand, because most people prefer not to carry forward old kites into a new year.

During Uttarayan, exclusive kite markets called Patang Bazaar open; and these 24-hour brightly-lit markets reach their peak the night before as the crowds throng there in festive spirits. The spending spree is simply mind-blowing. The markets carry kites and accessories, such as manja-spools and protective finger-bands that help prevent cuts on fingers when flying high-tension kites. As opposed to readily available manja-spools for common enthusiasts, serious fliers go for quality, custom-made more expensive manja. One shop owner told me: "We are a family of seven and we start making the kites three months before the festival. Our kites range in price from Rs.40 (about $1) for a packet of 20 pieces to Rs.600 for a packet of 5 pieces. The manja-spools range in price from Rs. 150 to 200 for 1000 yards". 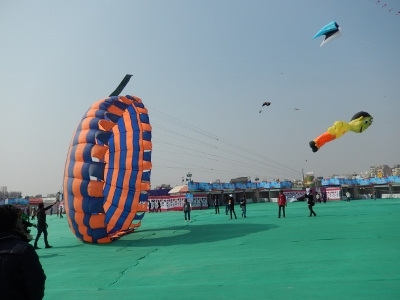 Sky’s the limit: trying to get a kite to fly

Kites have a long history in the region. Indian kings found the sport both entertaining and an expression of their prowess, but kite flying took time before reaching the masses. Today, kite manufacturing is a serious business worth around Rs.500 crores ($100,000,000), as the then Chief Minister stated during one of the inaugurations of the festival.

Whether you are a kite enthusiast or not, the festival is worth a stiff neck and you will no doubt find yourself flying a kite in no time. A Gujarati family at the pol may be very happy to help you share in the festivities even if you never knew each other before. Other details like next festival date, places to eat and stay and nearby sights can be found at www.Gujarattourism.com.