The Jews of Sicily 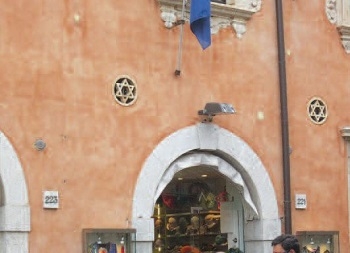 The front of the Police HQ in Taormina showing two Stars of David. Many of the roads in the immediate area of the building have names of Jewish origin, indicating that this had very likely once been the main Jewish district of Taormina. Story and photos by Alan W. Benjamin

Prior to our eight-day touring holiday in Sicily, we knew very little of the history of this island other than that it is or was the infamous home of the Mafia. Of course there were famous Jewish Mafiosi such as Meyer Lansky and Mickey Cohen, but neither were Sicilian although part of the Cosa Nostra (meaning 'our thing') was jokingly called the Kosher Nostra by the Jewish underworld. But Sicilian Jewish history can be traced back to well before the Romans controlled the island.

The first Jews in Sicily were probably Syracuse traders in the final centuries of Greek dominance. Later, around 70 BCE, Romans brought Jewish slaves to Sicily and as time went by many won their freedom, prospered and became a respected part of the community. Jews were recorded as living peacefully in Palermo, Messina and Catania but in tthe sixth century Pope Gregory treated the Jews badly. 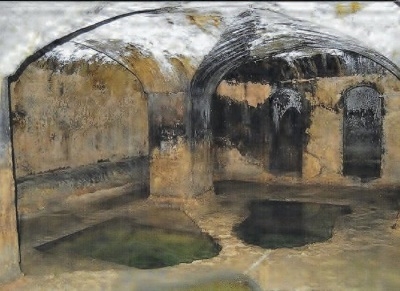 By the ninth century. Arabs controlled the island and the Jewish community was once more treated well and was flourishing. In 1072 the First Crusade took place, after which the Normans and the Catholic Church controlled the fate of the Jews. In 1210, the Jews of Sicily faced such aggressive persecution from the Crusaders that the Holy Roman Emperor, Frederick II, had to intervene on their behalf. Varying degrees of persecution continued, but despite this, Sicilian Jews still continued to thrive. Some Sicilian rabbis even communicated with Maimonides, posing religious questions.

Systematic persecution started once more in the fourteenth century. In 1310 the King of Sicily adopted a discriminatory policy towards the Jews, requiring them to mark their clothes and their shops with a special symbol akin to the Star of David which was enforced by the Nazis. Jews were also forbidden to have any relationship with Catholics, and they were ordered to live in ghettos. The next year strict decrees were directed against private ceremonies. For example, Jews were forbidden to use any decorations in connection with funerals other than in exceptional cases when silk was permitted: otherwise the coffin had to be covered only with a plain woollen pall.

In the town of Marsala, Jews were compelled to take part in the festival services at Christmas and on St. Stephen's Day, and were then followed by the mob and stoned on their way home. At the beginning of the fifteenth century, oppression was at such a level that in 1402 the Jews of Marsala presented an appeal to the king, in which they asked for exemption from compulsory menial services, the reduction of their punitive taxes, and the hearing of their civil suits by the royal chief judge. In addition there was a plea for the reopening of the women's bath or mikveh, which had been previously closed. This final appeal was granted. It was upon learning of the existence of this, Europe's oldest mikveh, that I decided to investigate further: this aroused my interest in the history of the Jews of Sicily.

On March 31, 1492 the Jews of Sicily along with Jews in all Spanish possessions were told they were being expelled. At that time 100,000 Jews were living on the island. They were forbidden to depart secretly, sell their possessions or conceal any property. Next, the carrying of weapons was prohibited, and all valuables were appraised by royal officials on behalf of the state, packed into boxes and given into the care of wealthy Catholics. Only certain items were allowed to be taken on the journey: one dress, a mattress, a blanket, a pair of used sheets, a few provisions, plus three taros as travelling money. All other Jewish property was confiscated by the Crown. After numerous appeals, the date of departure was first postponed to December 18, and later, after some bribery was paid, to January 12, 1493, but it actually took place on December 31, 1492.

In order to remain in Sicily, a significant number of Sicily's Jewish population converted to Catholicism. Many of these converts remained and practiced their faith secretly as was the case in Spain. In a 1740 proclamation, Jews were formally invited to return to Sicily. A few came, but feeling that their lives were insecure, they soon went back to Turkey where many had gone after the expulsion.

A rabbi of Italian-American descent, Stephano di Mauro, became active in Sicily in 2008 and opened a small synagogue. Rabbi di Mauro was born in Syracuse, Sicily, but was raised in the United States. He discovered his Jewish roots at his mother's deathbed. After learning that his family had been secretly Jewish for many years, he put the wheels in motion to convert, and was eventually ordained as an Orthodox rabbi. He was already a well-established doctor so he set up an ad-hoc synagogue out of his doctor's office in Florida. He and his family moved back to Syracuse in 2007, where he now serves as the first Orthodox rabbi in that region for several centuries.

To learn more about the mikveh and Sicilian Jewish History go to the website http://www.bestofsicily.com/mag/art421.htm