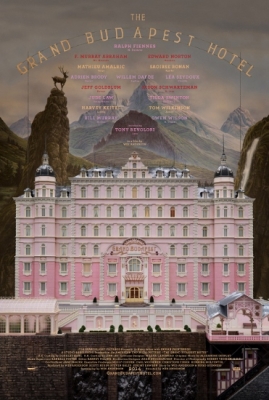 “His world had vanished long before he had entered it. But I must say he certainly sustained the illusion with a marvelous grace.”

This line is spoken by Zero Moustafa (F. Murray Abraham) in Wes Anderson's newest film, The Grand Budapest Hotel, perhaps his best and most interesting work filled with fascinating, likeable, and delightedly despicable characters played by the filmmaker's usual regulars. Moustafa, the title's current concierge, narrates through flashbacks of his younger self (Tony Revolori), and we follow his bizarre and wonderful tale as protégé to the former hotel concierge, Gustave (Ralph Fiennes, as always brilliant). The pair form a special alliance in the wake of World War II, as they are swept into murder, thievery, and conspiracy.

Despite the historical context, the film upholds Anderson's stylistic devices with much witty humor and sharp dialogue, as well as unpredictable surprises along the way. The hotel itself is a magnificent maze of colors, which serves as a backdrop to the rest of the film's unique use of crisp tints, black and white cinematography, animation, and photographic stills.

Gustave's main occupation is to please his guests at any cost, especially "old, wealthy, lonely, desperate women," above all Madame D. (Tilda Swinton). When threatened by her son, Dmitri (Adrien Brody), after she is found murdered, and a "second copy of her second will" is revealed, Gustave shamelessly tells him, "I sleep with all my friends, darling."

Along the way, we are taken on a wild, adventurous journey, which includes express trains, prison breaks, and our own morality being questioned with both psychopathic killers (Willem Dafoe and Harvey Keitel) and righteous characters who risk their lives to save others (Mathieu Amalric, Jeff Goldblum, and Edward Norton among others).

But at the heart of the film is the camaraderie between the past and future concierges: the poor, humble Zero Moustafa who learns from Gustave survival skills: how to charm, deceive, and outsmart others, all the while upholding old-school British mannerisms and values.

Inspired by the writings of Jewish-Austrian Stefan Zweig, Anderson's screenplay and direction is superb, entertaining, and enchanting.