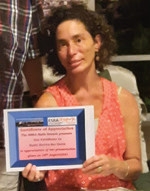 In August, ESRA Haifa Branch hosted a Live Event at the home of Cora and John Tresman, in Haifa.

The speaker was Rabbi Haviva Ner-David from Kibbutz Hanaton, who talked about her life in Israel and her latest novel Hope Valley. We learned about the family's arrival at Hanaton, which was failing and was about to be evacuated, and how Rabbi Haviva and several other families then began to resettle and rebuild the kibbutz, by starting a winery and planting field-crops. The highlight of this work was the finding of an ancient mikveh (Jewish ritual bath) nearby. With some financial help, they moved the mikveh to the kibbutz and refurbished it. Now, it is an important part of the kibbutz, and is used regularly under the supervision of Rabbi Haviva.

Rabbi Haviva then told us about how she got the idea to write her book, a novel about two women, one Jewish Israeli, and one Palestinian Israeli. The story is partly based on an actual meeting between two such women.

The evening ended with many Questions and Answers and everybody was very satisfied with the results. More refreshments finished a very enjoyable evening, and the donations collected by ESRA from the participation added some needed funds to the Haifa ESRA Branch.