Almost three years ago we left Portland, Oregon, and moved into a 4th floor apartment on Har Sinai Street in central Raanana. One of the many pleasures of living here has been hearing and learning about the symphony of sounds that surrounds us day and night. In particular, during our prolonged stays inside because of the viral pandemic, the sounds wafting through our windows have become an important link to the outside world, telling a changing story from hour to hour and day to day. 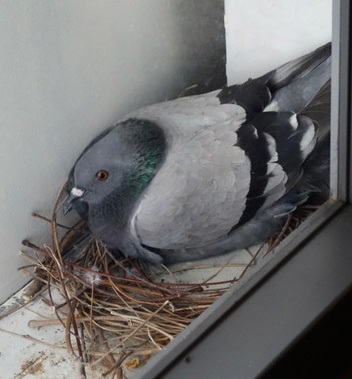 Very early in the morning, we hear the cooing of pigeons and the songs of other birds. Soon thereafter, we start hearing the sounds of trucks making deliveries to the supermarket across the street. It is hard to ignore the annoying beeps as they reverse into the loading dock, and the sound of idling engines and loud horns.

The next movement of the symphony tells of the various neighborhood sanitation measures: the garbage trucks sit with idling engines and intermittent roaring as they compress loads of garbage. From time to time, street sweeper trucks pass along the block, with the sound of water being sprayed on the sidewalks and the swishing of their brushes. One of the loudest sounds is the raucous rumble of plastic bottles being sucked out of the wire recycling container on the corner.

Later in the morning we hear the charming, tinkling sounds of kids happily at play in the kindergarten across the street, sadly absent during prolonged closures related to the pandemic.

We definitely know that we are in a Jewish town when we hear the sounds of prayer from the Cleveland shul across the street. During the month of Elul we hear the sound of the shofar each morning from the comfort of our home, and on Rosh Chodesh we enjoy the tuneful chanting of the "Hallel" psalms. And as the Shabbat approaches on a Friday afternoon a silent calm falls upon the neighborhood as most traffic stops and the never ending distant rumble of buses on the main road a block away comes to an end for 24 hours. Almost complete silence settles on the neighborhood late Friday afternoon as Shabbat preparations are completed, and a range of aromas permeate the stairwell as I take out the trash before Shabbat. As the sun sets we often hear the distant sound of a shofar blast marking the entrance of Shabbat.

As the isolating reality of the pandemic hit home, and our shul closed we were comforted and accompanied on the Shabbat by the traditional sounds of prayer groups on balconies of the building across the way, and could hear the Priestly Blessing declaimed from the rooftop. This year we all celebrated Pesach alone in our homes, but at an arranged time we went out onto our balconies to sing the Four Questions of the seder together.

During the dark winter evenings of the Chanukah festival we often hear excessively amplified music blasting from vehicles parading up and down the main road, with illuminated menorahs mounted on their roofs.

Sounds and noises from further away remind us of the realities of life in Israel. The occasional sirens of ambulances and emergency vehicles hint at stories and dramas rarely heard. Other sounds remind us of our insecure situation in the world: occasionally air force jets streak by during the night, and once we heard an alarm siren sounding in the distance during the early morning hours followed by a bang, only to read later that a rocket from Gaza struck a house in a village just north of here, thank G-d without loss of life as the family made it into their protected room just in time.

A quintessential sound familiar to all Israelis is the wailing sirens that sound across the land on Yom Hashoah and on Yom Hazikaron: memorial days for victims of the Holocaust and of the wars in our country's past. All traffic stops for the 1-2-minute duration of the siren, as everyone stands at silent attention. 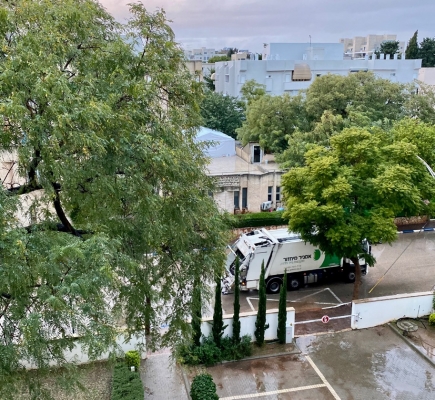 As we live in a building with 24 apartments, the sounds from within frequently blend with sounds entering from without, but are only rarely loud enough to disturb, thanks to the solid concrete walls. We hear babies crying, parents singing to and playing with their little kids, and parents and kids yelling in unison at each other. Surprisingly infrequently, we hear kids and families playing on the shaded grass in front of the building. A regular and pleasant sound backdrop that disappeared with the onset of the pandemic was weekly choir practice in an adjacent apartment. Not as pleasant are the ubiquitous sounds of air conditioners humming and roaring outside, or the occasional raucous sounds of mowers, blowers and trimmers when the gardening crew are at work outside.

One of the few economic activities that continued throughout the shut-down and that provides a constant sonic companion are the near and distant sounds of construction. From time to time we hear drilling, hammering or the clanking sound of something heavy dropping.

So next time your domestic peace is disturbed by noise, close your eyes and bask in the symphony of sounds telling a myriad of stories of life around us.