Still difficult not to pass judgement 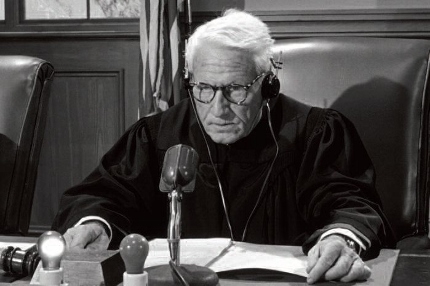 Spencer Tracy in a scene from the movie ‘Judgment at Nuremberg’,. Writer Eric Moss says that the film made a big impression on him

Some months ago, I attended a week-end conference of Germans and Israelis. Its goal was to explore together the possibility of moving beyond the Holocaust. The setting was Shfeya Boarding School near Zichron Yaakov. Built years ago, it still has the old-fashioned, pastoral look of a kibbutz or moshav. The conference was sponsored by the Israel Institute of Group Analysis, of which I am a staff member, and an equivalent German institute. Participants were Israeli colleagues, many of whom I knew from decades of work in Israel, and German ones, whom I didn't know.

I had been looking forward to the event. The subject itself interested me, and because the participants were former "enemies" trying to find a way to live together now, I anticipated an intensely loaded experience. It turned out to be just that, but very different from the way I'd expected.

There were only a few people present from our Institute. Perhaps the conference title - Beyond the Gates of Auschwitz - put people off. Whatever the reason, I found myself quite alone, and as the week-end progressed, I felt worse and worse.

All during the prior year, I had suffered from an illness that had affected my legs and my ability to walk. This conference was the first time I had stepped out of the sick role and attended a professional event far from home. I was still using crutches, and had to walk from building to building and ask people for help. I felt self-conscious and awkward, and, to my disappointment, the lectures and group discussions did not hold my interest. By the end of the week-end, I was glad when my son took me home.

Later, when I thought over my experience, I realized that my physical difficulties may not have been the only reason I felt uncomfortable. There were two main groups of participants - the Germans, whose parents had been involved one way or the other in the Holocaust perpetration, and Israelis, whose lives had been personally marred by the Holocaust. This Israeli group included people whose parents had survived humiliation, hunger, abandonment and death, and had come to Israel to build new lives. Their ability to be good parents had been affected, and the second-generation Israelis at the conference, like their parents, carried emotional scars from their family experiences.

My background was very different. I am an American Jew. So were my parents and my grandparents on both sides. Growing up, I had not been affected by the Holocaust. I never encountered a single act of anti-Semitism until a trip to Mexico when I was 17.

At a book fair, I spotted a stall with many books which bore an unfamiliar symbol on their covers - a Star of David with the old Communist symbol of hammer and sickle in the middle. The proprietor told me the books were about the Jewish plot to take over the world. Astonished, I told him I was Jewish, lived in a Jewish community and I'd never heard of such a plot. Unruffled, he pulled out one book and showed me a page on which it was written that the first letter in President Harry Truman's middle name was S. The letter stood for Solomon, and that proved that he was part of the Jewish plot. I told him that was ridiculous, but he didn't budge.

In high school, I read Exodus by Leon Uris, a book that made a big impression on me. The protagonists, Holocaust survivors and Sabras, were real heroes I could look up to.

Another event that also made a big impression on my Jewish sensitivities was a movie, The Nuremburg Trials, about the Nazi leaders who were brought to trial after WWII. Justice, to my satisfaction, was achieved with the greatest of Hollywood touches, and to this day I find myself thinking of scenes from that movie.

These three episodes were the sum total of my Jewish and Holocaust experiences until I came to Israel.

Back to the conference. As the hours went by, I felt less and less that I belonged there, which was strange as I usually enjoy conferences. They are an opportunity to meet new people and deepen relationships with those I already know. However, I felt more and more like an outsider, emotionally empty and sorry for myself and my crippled legs. I felt as if I were a voyeur looking in at someone else's big event.

A while ago when I went out for coffee with a friend, a psychiatrist, who himself was the child of Holocaust survivors. I described my disappointment with the conference and my feelings of exclusion. He strongly disagreed with my conclusion that I hadn't belonged. He was sure that just by having lived my adult life in Israel, a post-Holocaust creation, I have been touched in a major way by the Holocaust.

With his remark, a window of understanding opened. I came to Israel when I was 22 years old, 45 years ago. I am married to a Sabra and we have raised four children here. It is here I built my entire adult career as a psychologist. Hebrew is the language I speak with several of my closest friends.

It is in Israel that I became familiar with the Holocaust, beginning with the many stories I heard in my wife's family about her father and his sisters, all of whom fled Germany when the Nazis came to power. The director of the hospital in which I had worked had a professional interest in raising awareness of the emotional problems of the children of Holocaust survivors. His lectures and personal talks were further exposure to the Jewish Holocaust experience.

Incrementally, I had absorbed dozens of Holocaust stories through movies, books, newspaper articles and people who came to me for therapy, as well as a moving story told by one of my sons, who, when in high school, visited Auschwitz with his class. All these have strengthened my feelings as a Jew and an Israeli.

Now, bolstered by my friend's perceptive comments, I have come to a different understanding of my conference experience. The most vociferous Israelis were those who had been directly affected in their family lives. As I hadn't been touched personally in my family, I felt out-of-place. I came from a different background, a pampered American one. The provocative question raised by the conference organizers "Can we put the Holocaust behind us?" is as relevant to me as it is to many Israeli friends and colleagues.

If there is another conference, I will be able to take a fuller part. And I will no longer blame my feelings of exclusion on my poor legs.

Eric Moss, PhD, is a clinical psychologist who lives in Kfar Saba. He grew up in West Orange, New Jersey and came to Israel when he was 22. He has worked all his professional life in Israel, and written many articles and books about his experiences.