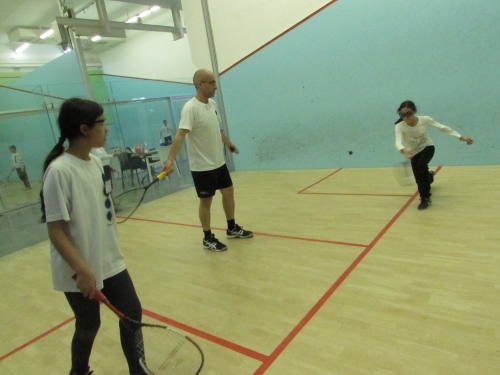 The game of squash takes its name from the "squashable" soft hollow rubber ball which two players (or sometimes four) whack around the court. Invented by pupils at Harrow School in England in 1830, the sport spread gradually to America and Canada, eventually becoming popular all over the globe. The British brought the game with them to far-flung countries including Egypt, Jordan, Pakistan, Malaysia and India, as well as to Palestine. During the Mandate period, soldiers took a break from policing and politics on courts they built on army bases and at the YMCA in Jerusalem. Squash is a break with a burn: players work up a steaming sweat as they run to wallop the ball. In 2003 Forbes magazine rated it as the healthiest sport in the world.

Unique among racquet games, squash players share the same space as they battle to be the first to reach 11 points and victory; this challenge is repeated for the best of five games. Players take turns hitting the shot against the front wall, after which it can bounce once on the floor and ricochet off the side or back walls before the opponent slams it again. The courts are small – 6.4 by 9.75 meters – so opponents need to scramble out of each other's way; obstructing each other is strictly forbidden. Squash, therefore, fosters fair play and teaches how to give space to the other, two values which could both do with a bit of help in our little crowded country.

"Squashbond," the concept of using squash to instill values of good sportsmanship, as well as creating a space where Arab and Jewish kids could both compete and train together, was the brainchild of South African immigrant Hillel Bloomberg, who initiated the first courts in Raanana in 1978. Bloomberg, who is now 70, today builds and manages squash courts in Israel and coaches junior squash players. Together with ex-Israeli champion players Nitzan Moree and Yariv Bloomberg, Hillel realized that the game was a perfect framework for a coexistence platform. First, squash could be introduced into the Arab sector, and then Jewish and Arab pupils could play together. The founders believed that as young children do not usually have fixed ideas about other sectors of society, working together at the sport of squash would start a dialogue which could impact positively on relationships in the future.

"Squash is becoming more popular in Israel," claims Nicky Capelouto, Chairman of the Trustee Board of Squashbond, "with about 80 courts around the country, home to some 5000 players including 250 kids." The game is even more well-loved in other parts of our neighborhood; Egypt's President Mubarak was a great player who encouraged the sport for years. Today 5 of the top 10 players in the world are Egyptian.

However, among Israel's Arabs, the sport of squash has not been very popular. According to Capelouto, there are no facilities for the game in the Arab sector apart from one adults-only court in East Jerusalem. "We saw this as a great opportunity to introduce the sport to Arab pupils, as well as a great chance for a healthy, fun experience and a way for different pupils to interact," he explains.

Squashbond approached Headmistress Fatin Bshara at the Al Zahara Junior School in Tira, twenty minutes from Raanana. Bshara loved the idea. Now each week some 20 Arab pupils - girls and boys – join their counterparts in Raanana for a hot meal and a sizzling session on the courts. And all this for just 60 shekels a month; "Squashbond and Beyond" is a registered nonprofit organization.

Nitzan Moree, himself an ex-champion in Israel's junior team, is the coach of the kids. "The first year we faced unusual challenges," he explains. "For example, none of the Arab pupils in the 4th grade knew any Hebrew yet. Their language skills improved along with their shots." Indeed, according to Moree, teachers at Al Zahara reported an overall improvement in the pupils who participated in the project – their grades, concentration and study skills all benefited. This year Jewish kids from Raanana will join the program, with the enthusiastic backing of Mayor Zeev Bielski and the Raanana Municipality which funded the initial year of the program. 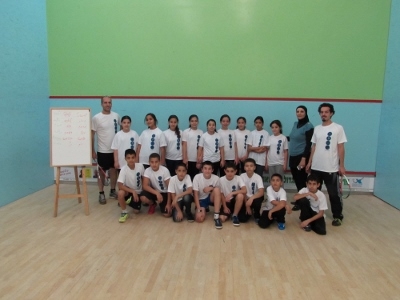 Capelouto is optimistic that the program will go from strength to strength. He explains that aid is coming in from welcome sources: Orbotec donated 25 computers so that players can study before their squash sessions, ISPO, the Israeli Squash Players Organization, is supporting the program and volunteers are being recruited to teach the kids English as well as computer skills.

Israel already has some impressive squash achievements; this year, for example, the under-15 team came 3rd in the European Championships. In the early days of the state, Capelouto notes, the majority of squash players were English speaking immigrants; today Israelis outnumber the Anglos. "Now it's our dream to build a court in Tira," he adds, "and to see an Arab graduate of our program on the national team."

Squashbond is currently looking for volunteers to chat to youngsters in English. Feel free to join in the fun – who knows, you might even get to swing a racquet around.