Apr 23 Posted by ESRAmagazine in February 2017 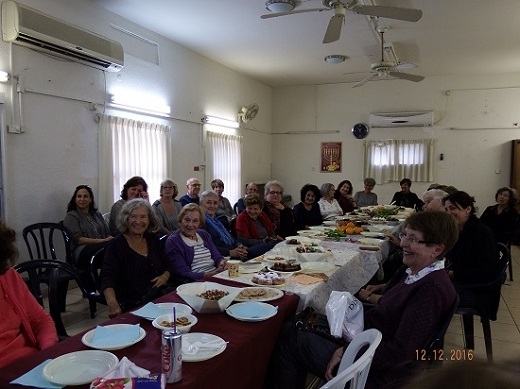 From Carl Hoffman, a frequent customer

Last December 12, I had the privilege and pleasure of attending ESRA's farewell party for Cynthia Shapiro, who for the last 13 years has been the principal volunteer and unquestioned 'majordomo' of the ESRA Secondhand Bookshop in Raanana. Speaker after speaker thanked Cynthia for her years of service and extolled her dedication.

I did not speak on that occasion, but I probably should have said a few words. You see, it was mentioned at some point in the party that under Cynthia's stewardship, the bookstore had raised somewhere in the vicinity of 1 million shekels for ESRA. I believe that many, if not most of those shekels, came from me.

I have been one of the bookstore's most regular customers, and perhaps its most frequent. Not only are all of my bookshelves full to overflowing, but tables and desks are now groaning under the weight of books that I have bought at the store, and piles of books rise like Babylonian ziggurats from almost every available patch of floor space. There is even one room in my apartment that can only be entered or exited by walking sideways.

One of the things I have loved most about the bookshop is that I never knew what I would find there next. Wondrous books on history, literature, art and almost everything else would suddenly turn up there, from God knows where or whom. I even walked in one day to see a book written years ago by none other than myself. I did not, however, buy that one.

More important was the friendly atmosphere of a quiet book-lined haven to which I could always repair for a few minutes of calm and comfort among nice people and interesting books. I thank Cynthia, and the other great ladies there, for providing me with a little home away from home in the middle of Raanana. She will be sorely missed. 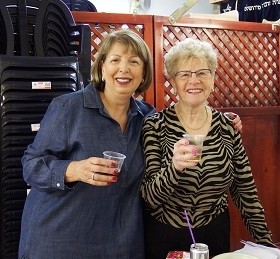 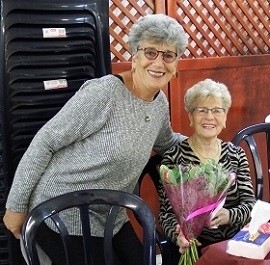 From Esther Rabinowitz, a volunteer at the Bookshop

We had been good friends with the Shapiros for many years when Cynthia suggested that I come and work with her in the ESRA Bookshop. I thought, why not, I love reading and it would be a fun voluntary job. Little did I know how bossy and demanding she could be and really expected 100% dedication from all her volunteers. Suffice to say after all these years we are still even better friends and I haven't been fired!

Cynthia ran the bookshop as if it were her own business. We started off with hundreds of books that had been donated, many fit for the bin. Her aim was to alphabetize all the books and put them all in their relative sections. I remember groaning, being Cynthia she got it done and that is the way the bookshop was run successfully, so it paid to be bossy.

Today, mind you, she has a very strange way of sorting out the shelves, throwing books all over the place and mixing the 'A's' with the 'B's', etc., losing the plot slightly when being interrupted; but in the end it all gets sorted out. She may not be the tidiest of organizers, but she knows where everything is and plies her way through authors and recommends books she hasn't even read, a true saleswoman.

In between selling and tidying, we have spent many hours being confidants to one another – maybe we could join together and write a bestseller. I can just see Meryl Streep playing you, Cynthia,If we could sell the rights…mind you, I think we could be sued by some, over what we have discussed!

I have been a volunteer for more than fifty years, but I have never seen anyone as devoted and dedicated to the job as Cynthia. She will be sorely missed in more ways than one.

After many shopping expeditions with you, Cynthia, I know how difficult it is for you to find anything that you like. One certainly needs strength and patience. The volunteers wanted to buy a gift for you from Magnolia, so I took up the job once again and bought the gift knowing that you can exchange it, which you probably will. Just remember where you put the petek hachlafa. The gift comes with lots of love and appreciation for you being just you.

Finally in Pirkei Avot – Ethics of the Fathers ­– it is written "do unto others as you would want done to yourself" and this sums you up, and it is why you have been so successful in running the bookshop: your inner self shines.

We are not losing you. You and Stanley are at a new stage in your lives, thankfully together. We wish you good health and happiness in this new venture, and I am sure that within a month you will be bossing someone around in the library at Protea Village. Long may you be there to do it.

Cynthia, my pal, I love you.

For some people volunteering is about giving. But for you, Cynthia, it is a way of life.

Thank you for keeping the bookshop going with your love and dedication, treating it as you would your own business. You've motivated your team of volunteers, and together with Dorothea Walters, have created a little corner of ESRA that we would miss very much if it ever closed.

A big part of this thank you also goes to Stanley, who has supported his wife Cynthia's meshugas for so long. And, of course, his contribution has also been invaluable: firstly for his support, but also for helping schlep hundreds of books back and forth to the College on Book Sale Day. Not an easy task, as well as all the other behind-the-scenes tasks that we probably don't even know about.

Volunteers are not the same as employees. They can choose to stay or walk away at any time. But despite setbacks over the past couple of years where the bookshop has not brought in the amounts that it once did, and despite being discouraged and threatening to pack it all in several times, you persevered and stayed on, trying always to find innovative ways of boosting sales.

Your contribution has been invaluable –t I did a very rough calculation, and over the past 13 years the bookshop has made well over NIS1 million. 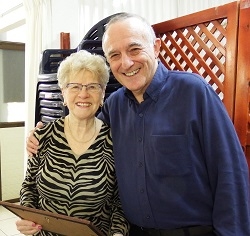 Thank you for being a volunteer. It's been a privilege working with you, and we will all miss you very much.

Cynthia Shapiro was born in Sheffield, England in 1937. She was educated at High Storrs Grammar School for Girls, after which she went to a secretarial college to learn shorthand and typing.

She always wanted to be an actress – was involved in amateur dramatics from an early age and also played parts in some BBC North of England drama productions. At 18, Cynthia got a job as an ASM (assistant stage manager) with the Chesterfield Civic Theater, a professional repertory company, where she worked for a year for £2.50 a week. She loved it, but because of the long hours she found she was losing contact with her Jewishness and Jewish friends, so she left.

Cynthia was offered a job in London with FZY (Federation of Zionist Youth) as their organizing secretary, so at age 19 she and a friend left Sheffield for the "greener grass on the other side". Through FZY she met her future husband, Stanley, who came from Belfast, Northern Ireland and they married in 1959. Life in Belfast was wonderful until the late 60s when the IRA reared its ugly head, and the situation between the Protestants and the Catholics became intolerable and horrendous. The Shapiros knew they had to get out, and in July 1980 they made aliyah with their four children (and 22 pieces of luggage). They settled in Raanana. 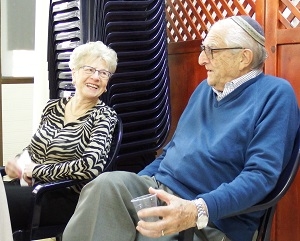 Cynthia and husband Stanley at her farewell party

Shortly after their arrival, Cynthia met people who were starting a drama group called "The Sharon Players" and she became actively involved in this group for more than 20 years. She also joined Wizo and Emunah. In the mid 80s she got a job as an English secretary in the Zoology Department of Tel Aviv University where she worked for 13 years.
The day after she retired in January 1998, Cynthia became an ESRA volunteer, working for three days a week in the Herzliya office, doing anything and everything. She also proofread, and still does, for ESRAmagazine. In 2003 Cynthia became active in the Raanana bookshop and was part of the team that set it up.