Six Day War - Traumatized I Left my Heart in Israel 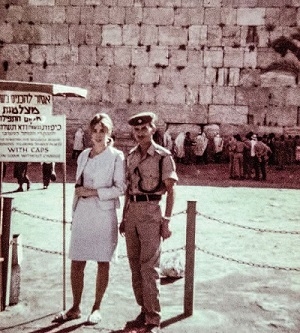 I was a medical technician at the Jewish General Hospital in Montreal, Quebec, and I took a leave of absence to answer the call as a volunteer for the Six-Day War for a period of three months. Along with some young doctors and a nurse from the hospital, we arrived by plane in Israel and were then loaded onto a bus, travelling in total darkness to our destination, only to be told when we got there that the war had ended.

We were divided into groups and taken to different places. I found myself in Kibbutz Hazorea, where I worked in their furniture factory for a very short while, adding the finishing touches to nearly complete items before they were finally shipped.

At the suggestion of the Jewish Agency, I went to Rambam Hospital. I worked there as a nurse in a ward where wounded young soldiers, both Arab and Jew, lay side by side in friendship. I remember wondering as I watched the Jews and Arabs so friendly to one another here in the hospital, why it couldn't be that way all the time? I was treated royally and was given a hut to live in behind the hospital. I stayed at the hospital for my two-and-a-half remaining months.

On Shavuot, June 14, 1967, I went to Jerusalem when the Western Wall was opened to the Israeli public.

As fate would have it, it was not to be. Due to some traumatic experiences which happened to me in Israel, I developed a post-traumatic stress syndrome, where my body chemistry went haywire for about a year. Though I was still able to work at my job in Montreal, I knew I was not able to take on the new stresses that would occur if I returned to Israel at that time. I think I left my heart in Israel and always dreamt of returning to live here.

In 1970, I married a rabbi who had a part time job working for a college in Israel. Our plan was to move to Israel, but that job fell through. Then I became pregnant, and life happened when planning something else.

The dream came true, but only after 45 years.

P.S. I want to apologize to Dr. Dan Levy and to the staff of Rambam Hospital for my failure to keep my promise to return and fill the job waiting for me. I regret not even giving them a reason for not returning because I was ashamed of my body failing me at the time. I hope all the friends and staff I worked with will forgive me. I am sure some of them wondered what became of me.