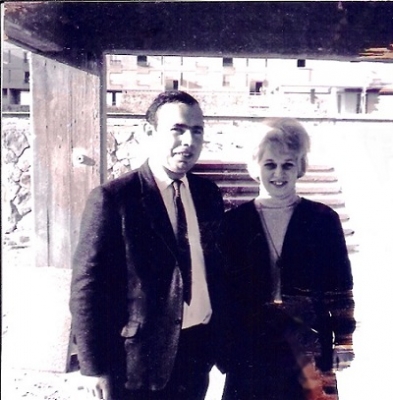 Michael and Judy Copeland in 1968

People have often asked me how the WUJS Institute began, so maybe this year it's time to reveal all. Well, after all, had it not been for the Six-Day War fifty years ago, it may not have come into being.

It all started in 1963 in the UK when Michael Copeland, "Copey", who was to become my husband, put together a group of 16 graduates who wanted to come on aliyah. He made all the arrangements through the then IUJF (now UJS) and Jewish Agency, and the group went to Ulpan Massada in Beersheva, moving on after the ulpan to find jobs all over the country. Subsequent groups of between 20-25 graduates came each year on the IUJF Graduate Year in Israel Scheme until 1966, which was my group, and of course with the outbreak of war in June 1967, everything changed.

​In the year before the war, a close friend of Copey's, Dr. Justin Phillips, had come on aliyah and was working in Hadassah Hospital in Jerusalem. The two of them had written a memorandum on how to improve the very dismal number of immigrants coming on aliyah but nobody was really interested. The Six-Day War changed everything. In the wake of the war, some 12-13,000 volunteers arrived in Israel, mainly students, all with the view of saving the Jewish state from extinction. We forget that with all the Arab armies gathered on Israel's borders ready to strike, it looked from the outside as though we were on the verge of another Holocaust.

However, the war ended very quickly and the volunteers, who had come ready to lay down their lives, had in fact nothing to do. Nobody knew what to do with them, and back then, when Israel didn't know what to do with people, they sent them to the kibbutzim. Most of the reservists who had been called up were demobbed very quickly and came home, so once again the volunteers weren't really needed (in any event, they hadn't come to Israel to pick apples!) And still nobody knew what to do with them. To Copey and Justin, the solution was very clear – they needed to be taught Hebrew and helped to find work. And had we then been able to do that straight away, probably 60-70% of them would have stayed.

The World Union of Jewish Students (WUJS) held their annual Conference that year in August 1967 in Jerusalem. Copey and Justin were able to get a resolution passed approving the idea to set up an institute in Arad which would offer an immediate solution to the volunteer problem but would also provide a fuller and better organized version of the IUJF Graduate Year in Israel Program. Anyway, the Conference participants went home leaving Copey and Justin with the task of establishing the Institute. At this time, there was no building, no teachers, no equipment, and of course no money. But they were idealistic enough to believe that if something was really important, they could make it happen – particularly in Israel where the impossible takes only a little longer. 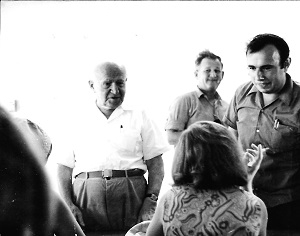 In the wake of the war, a public debate on how to increase aliyah was under way as during the 60s very few people had come to live in Israel. The Jewish Agency had come under heavy criticism and a proposal was made to establish a government Ministry of Immigrant Absorption (Misrad HaKlitah). An idea was proposed to offer scholarships to students who would come to study in Israel, and a large budget was set aside for this purpose. Not many students took up the offer, so we were able to channel some of these funds to enable us to open the Institute.

We had acquired the addresses of a large number of the volunteers and we wrote to ask them if they would be interested in joining a program of the sort we were proposing. Had we been able to open the Institute in September, we think that the numbers could have gone into several thousands (although how we could have managed that kind of number, I have no idea!) In order to see how serious the project was, the Jewish Agency asked us to invite volunteers to a meeting in Beit Brodetsky in Tel Aviv. We were disappointed when only 150 showed up but the Jewish Agency was amazed that so many came. At that point, they started taking us seriously.

We chose Arad as the location for the Institute for several reasons: it was close enough to large centers, but also far away enough away for there to be fewer distractions than the big cities could offer. The Arad Town Council, under the leadership of Avraham Baiga Shochat, welcomed the idea as they were at the time looking to expand Arad. They had given us a new, as yet empty apartment building for accommodation, and we asked the builders to adapt some of the apartments on the ground floor into classrooms, a dining-room, and an office.

We actually opened the Institute in Arad on January 2, 1968, with 127 volunteers. Not all were graduates – the planned structure of the Institute, which was to cater for university graduates, only came into being with the third group that started in October 1968. But we had an amazing mixture of people from all over the world. Any announcements that we made had to be done in English, French and Spanish for those who still did not know Hebrew.

The Institute offered a year program, six months of which were spent in Arad, learning Hebrew in the Ulpan. It also provided many varied courses in Jewish Studies: Jewish history, geography, the Arab-Israel conflict, Israeli politics, Judaism and Zionism, given by handpicked university lecturers as well as tours round the country and opportunities to be "adopted" by a local family. The Employment Service at the Institute helped place graduates in jobs in their field where they were committed to working for at least six months. The program, as we set it up, changed in 2006 and eventually closed. There are many reasons for this, but maybe the simple answer is that everything has its time and the Institute had served its purpose. 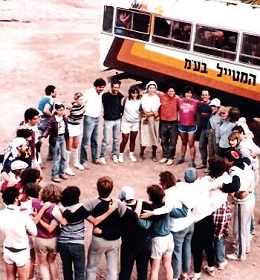 Many thousands of graduates from all over the world have gone through the Institute program (familiarly known as WUJS) and I believe that had it not been for the Institute, there would be many thousands of people who would not have come to Israel and stayed. We did not offer an aliyah program per se. It was a way to come to Israel, to learn Hebrew, to see the country, to work, and then make an informed decision regarding aliyah. Many people naturally enough went back to their countries of origin, but they went back having knowledge and experience about Israel, which is of course no less valuable.

The WUJS Connection lives on – so many alumni have kept in touch with each other over the years – and there are even cases of children of the first generation of WUJS people who came to the Institute. We once took a survey and discovered that about 30% of all those who had been to the Institute eventually made aliyah, which, I think, is quite an achievement.

I am very proud to have been a part of the whole WUJS experience at the time and feel that in some small way I've contributed my 'bit' to Israel.

Before reading science and medicine at Cambridge University, I was a foreign student on my gap year at Kibbutz Lehavot Haviva during the Six-Day War. I was picking fruit and cleaning out the chicken sheds, but that all changed when the war started and we were put on general duties around the kibbutz as the local kibbutzniks went off to war. Subsequently, I visited a prison camp on a military base in Beersheba. It kindled my life-long interest in military casualties and I am now a consultant in emergency medicine in the United Kingdom.