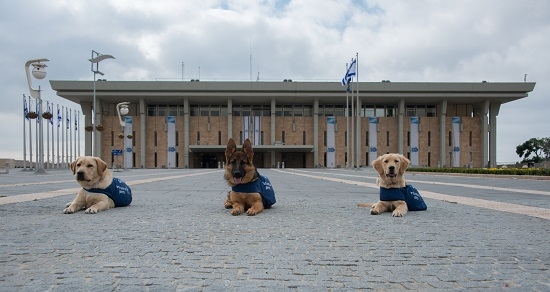 At the Guide Dog Center, we were met by Lisa Baron Haet, International Liaison, and Bracha ben Avraham with her fabulous dog, Dinka, and each took a group of us on a tour of the facility.

As Dinka is a working dog, Bracha asked that she not be petted while wearing her harness. She needed to be focused on her duties of leading Bracha through the campus that she was showing us. Once the harness was removed, we were allowed to pat her and make as much fuss over her as we wished.

Bracha took us around and gave us an in-depth explanation of the training of the dogs and their handlers. We visited the newborn puppies, the training yard and the rooms where those who are training with their new dogs are accommodated. Prior to the Center opening in 1991, a visually impaired Israeli was required to go to Jerusalem to pass an English test. If they understood English well enough, they were then sent to the USA or UK for a month of instruction with a guide dog. Not only was this hard on their families, but the dogs were not trained to handle obstacles and challenges found only in Israel. Plus, the dogs were trained in English, not Hebrew.

The Israel Guide Dog Center for the Blind was founded by Noach Braun who, during his military service, trained dogs in the IDF for military purposes. When Noach left the army, he discovered that there was no guide dog school in Israel. He decided to make it his life's mission to establish a guide dog school in Israel in order that all blind or visually impaired Israelis could obtain the mobility, independence and companionship that only a guide dog can provide; independence that they don't get by using a white cane or depending on family members or friends. Guide dogs not only lead their "partners" effectively and safely from one place to another, but provide love and companionship, as well as helping them meet new people and remain socially connected.

The dogs are carefully screened to find the best behavioral traits and each litter is specifically bred for size, speed and temperament to meet the individual needs of their owner. Labradors, Golden Retrievers and crosses between the two are mainly used.

The puppies remain with the center for eight weeks until weaned from their mothers. While there, they attend 'puppy kindergarten', where they are exposed to a variety of experiences, sounds and textures. They are also introduced to cats and other animals, so they will be less curious and hopefully won't want to chase them later.

The most popular volunteer program is puppy-raising. Most puppy raisers are university students on-campus, and they take the puppies everywhere, even to class and are visited once a month to be evaluated.

At 12–14 months, the puppies return to the center. About half of the dogs will meet very exacting standards for behavior and temperament and move on to advanced Guide Dog training. Dogs that are not selected, change careers and are placed in the Service Companion Program, going to homes of special needs people and the elderly, who are not necessarily blind.

Formal harness training can take from four to six months. During this time dogs are taught important skills, including "Intelligent Disobedience," or when to disobey a command that will place their partner in jeopardy; how to judge the height and width of their partner when walking near obstacles; and how to solve problems, including security barriers and sirens.

After the dogs are trained, they are matched according to the personalities and individual needs of the wait-listed partner. Clients come to the center for a test walk but often find that the dog chooses its own partner. After a match is made, client and dog train together for three weeks at the Center, and an additional week of specialized training is given in the client's home environment. Dogs typically work for eight years before retiring.

At ten years of age, the dogs are ready for their well-earned retirement and the client is provided with a replacement dog. It is up to the client to decide where the retired dog will go. All dogs go to loving homes where they live out their lives in peace and comfort.

At the conclusion of a detailed and informative tour by Chava and Dinka, we gathered in the auditorium for a short film and talk by the director Noach Braun, after which we returned to our bus to continue to the Ayalon Institute.

The Ayalon Institute, now a museum, was a secret ammunition factory disguised as part of a kibbutz to fool the British in the 1940s. 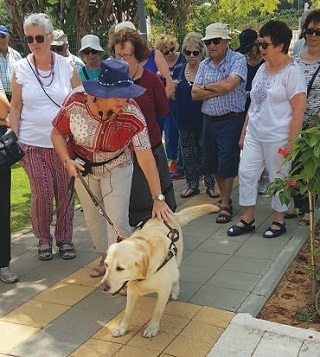 Beginning in the 1930s and during the British Mandate, a training center was established near Rehovot to prepare people to establish their own kibbutzim. This area was called "Givat Hakibbutzim" – Kibbutz Hill.

Realizing the need for ammunition, the Hagana established an ammunitions factory under this hill, which was near a British base. In 1945, the group built structures on the surface that resembled a kibbutz and in about three weeks, they built an entire ammunitions factory eight meters underground. The factory was about the size of a tennis court.

The people involved in the project worked very hard to conceal the true purpose of this kibbutz. They used different means to trick the British soldiers, who often visited the site. At its peak, the factory produced about 40,000 bullets a day. Once the bullets were produced, they were smuggled out of the factory to places all over the country.

Yosef Avidar, who was the head of the Israel Military Industries, brought the bullet-making machines from Poland and they were able to put them into the underground factory.

They devised an intelligent way of silencing the noises of the machines by having its openings covered by a 10-ton oven and a large washing machine. The washing machine was in use all the time and it became a problem for the kibbutz members because all of their clothes were washed so many times that they became threadbare. Again, they came up with a great way of masking their true intentions and created a 24-hour laundry service, so while they were hiding their secret, they could also raise money. Not all of the members in the kibbutz were aware that there was a secret underground bullet factory right under their homes. These people who had no idea were referred to as the "Giraffes" by all the secret factory workers.

Forty-five men and women risked their lives every day for three years to keep this project going. Every day, they would go underground in less than three minutes and begin their risky jobs of manufacturing thousands of bullets. Not only were they under the close watch of the British, but they were also working in dangerous conditions. There was no sunlight underground, so a lot of the workers fell ill from lack of vitamin D. They used a sun lamp to tan their skin so it wouldn't look suspicious. They also got extra rations in the dining room and if the person in charge of food was suspicious, she kept it to herself. Every day when leaving the factory, the workers had to make sure they had no traces of copper shavings or gunpowder on themselves. Everyone went through a thorough inspection of their clothes, hair and shoes before being allowed to leave the factory.

The workers had to make sure their product was safe and complete, so they randomly sampled bullets and shot them in the factory at targets to check for accuracy and precision. To transfer the bullets, they started by putting them in big milk cans, and later switched to putting them in fuel trucks. They devised devious ways of loading and transporting the bullets, because the British were keeping a very close watch on them.

The factory stopped operating in 1948, three years after being built, and the ammunition production moved to the Tel Aviv area and developed into what is today known as IMI (Israel Military Industries) or "Taas."

In 1987, the factory was restored and turned into a museum that is now open to the public.