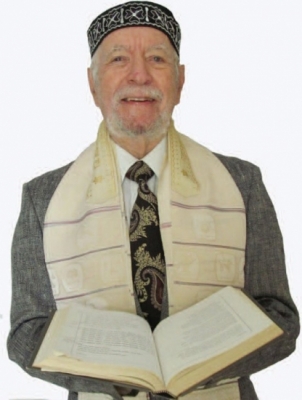 About a year ago, I brought my Uncle Shimon, a recent immigrant from the United States, to an ESRA editorial board meeting, thinking that, as a writer and composer, he would, perhaps, be interested in becoming a member of the board. Instead, he became more involved in his Ulpan classes, as a tutor of English in a Kfar Saba school and active in his shul, Hod v'Hadar.

Shimon was later written up in The Jerusalem Post, under the column New Arrivals. His aliyah with his wife Ilana in 2009 had been happily anticipated by his extended family in Israel, and created quite a stir. He was following in the footsteps of his four sisters, two daughters and many nieces, nephews and cousins who had preceded him from the States from before the War of Independence and during the following decades. He had spent two years in Israel with his young family, hoping that he would make aliyah then, but had returned to the States, where he became a successful music teacher, chazan and writer. He visited Israel often with the intention of making aliyah one day. At the same time, he also believed that he was making a considerable contribution to Jewish life in the Diaspora—in New York, Rhode Island and Florida, the states in which he lived. He also didn't want to leave his three brothers, with whom he was very close.

My Uncle Shimon had a flair for the dramatic and as a young man had wanted to be an actor, performing in dramatic productions in Brooklyn College. He had invited his family to see him. My grandmother, who, like most Jewish mothers, had eschewed an acting career for her son but didn't want to quell his self-confidence, came to see him act, with his seven siblings in tow. She warned the family, however, not to clap at his performances. "Don't encourage him!" she commanded.

My astute grandmother was known to have said to her children, "If you want to be an actor, be a teacher. This way you will always have a job and an audience." Shimon became a successful music, English and special education teacher in public schools, Hebrew schools and summer camps for many years. In fact, all eight children became teachers, as well as most of the grandchildren. Perhaps it is a genetic trait, since we are descendants of the Rebbe Noam Elimelech, a great Hassidic Rabbi and a great teacher.

Shimon grew up on the Lower East Side of Manhattan, the seventh of eight children – four boys, and four girls - in a very musical family. His mother (my grandmother) played piano for the silent movies, without knowing how to read notes, and his father (my grandfather) was a baal tfila (an untutored chazan). All the children had fine voices and many played instruments.

The six years he lived in Kfar Saba were incredibly fulfilling and rewarding. He became active in his shul immediately upon his arrival and was appreciated as a chazan and a choir leader. His Israeli grandchildren adored and respected him. He played tennis with them as well as with his nephews and members of the shul. The enthusiasm for things Jewish and musical he could now share with his Israeli family, and the bonds he forged with all of us grew stronger. He was a healthy man, with no need for pills or medication, played tennis twice a week, rode a bicycle all over the city, traveled and regularly visited his two daughters and three grandchildren in the States.

My mother, the oldest of Shimon's siblings, was very ill by the time Shimon and Ilana came to live in Israel. They chose to rent an apartment in Kfar Saba to be near her and another sister, who lived on the same street. Every day Shimon would take his electric keyboard or guitar to my mother's apartment and play and sing songs for her - songs of their childhood, folk songs, Hebrew songs, Yiddish songs, funny songs and nostalgic songs. Shimon's living in Israel afforded all of us here the chance to know and experience his kindness, generosity, humor, wisdom and talent.

Shimon was the chazan one Shabbat in Hod v'Hadar and was leading the Shacharit (morning) service He was on the bimah, which is the small stage on which the chazan stands when he conducts the service. He recited the prayer of Shmah Yisrael and suddenly fell backwards like a felled tree. Much like an actor in a Shakespearian play, he was unexpectedly struck down by an unseen enemy. He never regained consciousness and died a month later. He was 82.

The many letters his family received after his death from both sides of the Atlantic testified to a life well lived, appreciated by others and with a lasting influence on those who were fortunate to know him. May his memory be blessed.