Herod the Great: The King's Final Journey at the Israel Museum, Jerusalem

Many reconstructions and new finds from Herod's palaces in Herodium, Jericho, and other sites, are on display at the first exhibition entirely dedicated to Herod the Great, Israel's greatest builder and one of the most controversial figures in Jewish history. Exhibited to the public for the very first time, these artifacts shed new light on the political, architectural, and aesthetic influence of Herod's rule (37–4 BCE). Herod's tomb – discovered at Herodium after a 40-year search by the late Prof. Ehud Netzer of the Hebrew University – holds pride of place. The exhibition is held in memory of Prof. Netzer, who fell to his death in 2010 at the site of his discovery.

I went to the exhibit soon after it opened. I knew relatively little about Herod and had never visited Herodium – or Herodeon, as it is called in Hebrew and Greek - even though I lived just over the hill in Gilo for four years.

In preparation, I reacquainted myself with an outline of Herod's life.

Born in Idumea in 74 or 73 BCE, he was the second son of Antipater the Idumean, an extremely influential power-broker under the waning and feuding Hasmoneans, especially under Hyrcanus II. Through his marriage to Herod's mother Cypros, a Nabatean noblewoman related to Aretas III, King of Arabia, Antipater gained even more influence in regional affairs.

Recognizing Rome's rising power, Antipater supported Julius Caesar during the Siege of Alexandria and was supported by him to become the first Roman Procurator of Judea, effectively turning Judea into a Roman client state. Setting his sons up to troubleshoot in Jerusalem and the Galilee, he laid the groundwork for his own dynasty until he was poisoned in 43 BCE.

By 37 BCE Antigonus was dead, executed by the Romans, and Herod was in full control of Judea, Jerusalem, and the Galilee. To legitimize his rule, he set aside his first wife, Doris, and her son, and married Antigonus' niece, the Hasmonean princess Mariamne (I).

Proclaimed "Basileus" (King), Herod ruled an uneasy and resentful kingdom for the next 33 years, indulging his taste in expensive architecture while eliminating family and friends, to the point where the 5th century Macrobius penned the quip "I'd rather be Herod's pig than his son".

Manic-depressive? Paranoid genius? Brilliant politician? Herod managed a balancing act between his Roman patrons, Jewish subjects and Idumean-Nabatean heritage and ties. Viewed by the dynastic standards of the Middle East he was a success story, simply because he managed to stay in power for so long and died in his own bed in
4 BCE. Viewed as a Jew? Aha! There's the rub!

During the Babylonian Exile, the Idomeans had migrated north-west to the then largely empty Judean lands, while Nabateans took over the areas vacated by their Idomean cousins. Under Hasmonean rule, large segments of both populations had been forced to live as Jews, including being circumsized, or were expelled.

But the majority of the Jewish population did not recognize these so-called conversions, some rabbinic authorities ruling that neither men nor women so converted could marry into the Jewish community until the fourth generation. So, while Herod may have called himself a Jew to bolster his rule, there were enough anomalies to beg the question.

I came away from the exhibit stunned by the opulence, the craftsmanship, the time and money invested in sheer display, the scale of it all, and the tales many of the objects told. 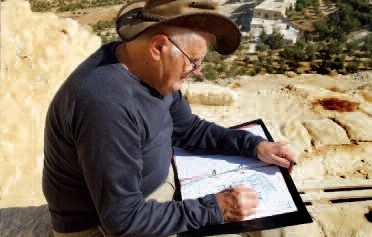 What stood out most was just how tight Herod had been with Rome: first through Mark Antony, then Augustus and Agrippa. Yes, that Marcus Vipsanius Agrippa who defeated Antony and Cleopatra VII at the Battle of Actium, the second most powerful man in Rome – who visited Herod at Herodium.

Ironically most of Herod's architectural achievements were destroyed by war or vandalism within two centuries of his death. 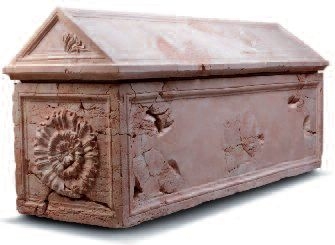 Of the Second Temple, that marvel of the ancient world, only four retaining walls remain, of which the Western Wailing Wall is one.

So what was Herod's legacy? A dubious legend, fragments in stone, and a period of relative prosperity and semi-autonomy before the people of Israel (Judea in particular) began the heartbreaking saga of rebellion, slavery, and exile.

Next day, I was on the bus going back to Eilat, deep in the pages of a Fay Kellerman whodunit. About half-way down the Dead Sea, where the road twists and turns high above the water's edge, something made me look up, out over the deep blue waters towards the red mountains of Jordan. 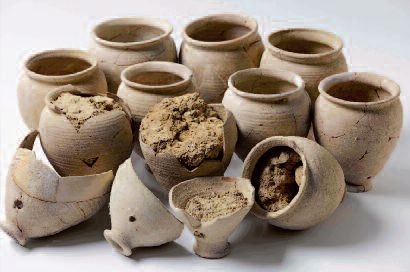 Planting pots from the gardens of Herod’s palace

This was Harod's landscape: this was where he was born, the area he returned to time and again, building lavishly at Jericho and Massada; the region from whence his Idumean forefathers and Nabatean mother came. For Idumea is the Latin form of Edom, meaning 'red' in ancient Hebrew – as in the red mountains of Edom.

I wondered if the choice of red limestone for his sarcophagus had not been for the sake of opulence, but because it was as close to home as he would ever come.