Searching for the Milky Way in Israel

Since I was a little girl the beauty of the stars has enchanted me. I wanted to understand the secrets of the universe, and I knew it had something to do with the stars. I was sure I was going to become an astronaut, and get just a little closer to infinity.

Well, I didn't become an astronaut, but I never lost my love of the stars.

I have spent weeks and months of my life lying under the night sky of the Indian Himalayas, and of the Israeli desert. Every time I feel the stars massaging my heart, all I want to do is to give this miraculous gift to anyone I can. So together with a dear friend, Sigal Yosha, we decided to take people on weekends under the Milky Way.

Well, it turns out that it's not exactly simple. You see, to be able to gaze into the night sky, you need to go to a place where you can actually see the night sky.

It is sad that we will not be able to see what our grandmother saw when she was a little girl. An international team of scientists created a world atlas of artificial sky luminance, detailing how light pollution is permeating our planet. We are shrouded by an artificial haze of light blocking the night sky. One third of humanity is unable to view the Milky Way because city lights are creating fogs of light pollution. The most light-polluted place in the world is Singapore, where nobody now living in the country has a chance to experience true darkness. Sixty-one percent of the Israeli population lives under light-polluted skies, putting Israel into the top ten light-polluted places in the world.

Nonetheless, Sigal and I went on a quest to find the Milky Way in Israel.

Since we were going to spend hours lying on the ground at night, we had to take the weather into consideration. In summer it is too hot in the desert, so we went to the Golan Heights. In autumn, we went to Makhtesh Ramon. In winter, when the central desert is too cold, we went to the Dead Sea and the Arava valley.

We spent endless, frustrating nights in the Golan Heights. Everywhere we went we found that even if we could see a faint Milky Way, it would cut off suddenly in a straight line where a light haze of a military base, or a UN base, or a kibbutz, or a Jordanian city, would take over. It looked as if someone had taken an eraser to the sky. We did find one spot east of road 98, where there was "enough" Milky Way to enjoy the night sky and we had some beautiful weekends there.

In autumn, particularly on new moon nights, we found Milky-Way-streaked skies over practically all of Makhtesh Ramon. Even though the lights of Mitzpe Ramon city drowned out the northern part of the sky, we still had a striking Milky Way. Thankfully, in 2017 Makhtesh Ramon was declared an International Dark Sky Reserve.

In autumn we also spent many nights scanning the Judean Desert. We can sadly report that there is no place in the Judean Desert (apart from one spot under the Palestinian Authority) in which the Milky Way dominates the sky. Either the light haze of Arad hits you, or if you move eastwards you get a haze of the factories and hotels around the Dead Sea, or the cities on the Jordanian side of the Dead Sea.

In the winter we found only one small area around the Dead Sea, on a deserted beach called Kedem Springs, in which there is a faint appearance of the Milky Way.

The Arava still has many dark areas, but one needs to travel far off the central road (Highway 90) and into the fields to get there. The Arava is also quite far from where most people in Israel live.

People might say that light pollution disturbs only a few night-sky lovers… So what?

Well, it's not only night-sky lovers. All living things on earth have a circadian rhythm. It is a natural, internal process that regulates the sleep-wake cycle and repeats on each rotation of the Earth. It is responsible for your sleep pattern, which affects your health and your quality of life. Disruption of the circadian rhythm has been linked to obesity, metabolic disorders, headaches, abdominal pain, liver disease, mental health and even breast cancer.

But it does not affect only humans. Turtles, snails, insects, foxes, bats, jackals, porcupines, birds and many many more animals are being affected in alarming ways. In California for example, thousands of tiny newborn sea turtles mistake human lights for the shimmering moonlight on the ocean, and they march a death march in the wrong direction.

When was the last time you saw a firefly in Israel? When I was a child in Hod Hasharon, we often saw fireflies at night. Now, it is a rare occurrence. Human lights have disrupted the ability of fireflies to communicate with their potential mates, to such an extent that they have just given up. That means that the birds and bats and frogs that used to eat fireflies have had to change their diet, or disappear; that the larvae and worms and snails that fireflies eat are not being eaten.

Besides the direct effect that light pollution has on humans and animals, research conducted at California University Berkeley showed that people who spend nights under the sky score higher on scientific reasoning, are more altruistic, less materialistic and are kinder and more positive.

So what can we all do to help save the night sky?

We are losing something priceless.

So go and switch off a light! 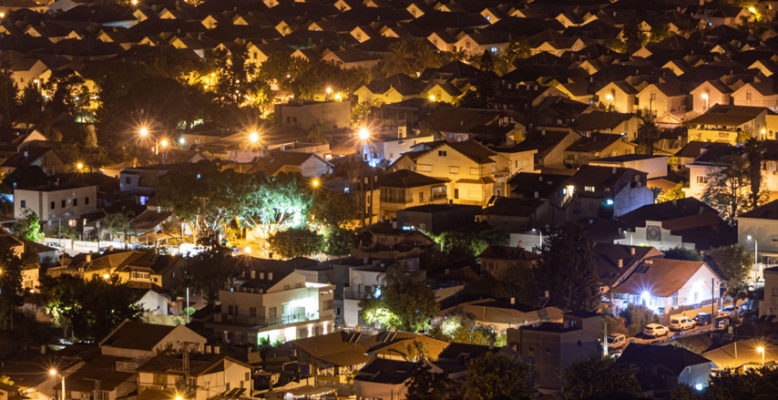 A neighbourhood in Haifa at night. Every outside light left on by carelessness, every street light too high or too strong, draws a sea turtle hatchling in the wrong direction, confuses a firefly away from its mate, disrupts someone’s sleep...
Tags:
Editor's Choice
PRINT