Scroll of Fire Off the Beaten Track 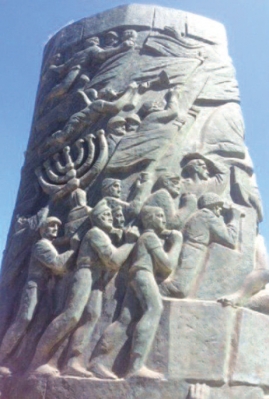 The Scroll of Fire, an 8-meter high sculpture, stands in the center of a clearing in the Jerusalem Hills, towering over the extensive forest of 6 million trees –making it the most expansive Holocaust memorial in the world. Photos by Lydia Aisenberg

Standing in the center of a large clearing in the Jerusalem Hills, an 8-meter high sculpture, known as the Scroll of Fire, towers over the surrounding man-planted 6-million-tree extensive forests that create the most expansive Holocaust memorial in the world.

Dedicated by Bnai Brith in 1971, the tightly-knit forests sit on hills high and low, their slopes covered in trees leading down to the dales and sometimes narrow valleys below.Four and a half million pine trees stand tall in memory of the adults brutally murdered in the Holocaust and one and a half million cypress trees stand a little less tall in memory of the one and half million Jewish babies, toddlers and children whose lives were snuffed out practically before they had begun.

One of the most beautiful sculptures to be found in Israel, the Scroll of Fire is unfortunately somewhat off the beaten track for most visitors from overseas.However, for those who have had the opportunity to stand alongside the impressive 16-ton bronze sculpture, the experience of literally being absorbed into different periods of Jewish history over the ages is a truly unforgettable, deeply emotional experience.

The larger-than-life realistic characters and scenes created in bronze by Polish-born sculptor and Holocaust survivor Nathan Rapoport crafted thereupon appear to be voicelessly shouting out to be remembered, each individual seeking recognition for their all-important role in perpetuating the against-odds survival of the Jewish way of life, Jews having lived and suffered through some of the harshest, most destructive periods of history from biblical through to modern times.

The Scrolls of Fire is a solid as a bronze-rock celebration of the birth of the Jewish people, their almost destruction, survival and resurrection and the wonderment of the State of Israel's founding. But it also depicts the constant struggle to defend this country against its sworn enemies.

A sign embedded in the wall of the car park informs visitors that one of the nearby forests, a joint project of the Jewish National Fund and Holocaust survivors from Melbourne, Australia, is dedicated to the memory of the Rt. Hon. Arthur Augustus Calwell, the first Minister of Immigration (1945-1949) in the government of Australia "whose humanitarian policy opened Australia's shores to victims of the Holocaust at the end of the war."

During my recent visit to the memorial, an extended family of first and second generation Holocaust survivors, some of whom were from Sydney, Australia, were just leaving the site accompanied by relatives from Israel.

In a short conversation, one of the Israelis tearfully explained that his Australian great-uncle had until that day not really shared with him and other family members the story of his miraculous survival in depth.

"Nathan Rapoport's sculpture gave him the strength to open up and share with us," the Israeli said.

The Scroll of Fire depicts so many heart-wrenching scenes of suffering, one of the most powerful being that of educator Janusz Korczak gathering terrified children to his bosom, attempting to comfort them, knowing they were all going to be murdered by the Nazis.

Rapoport's creation, his sculpture cast in bronze in Italy and then shipped to Israel, is a scroll folded inward forming two pillars.Entering the space in between both sections of the scroll, one looks up toward the sky.The Korczak portion of the sculpture is at the base of one section of the half-open scroll.On the opposite side, helmeted Israeli soldiers, wrapped in prayer shawls, stand in awe under the Western Wall in Jerusalem, their guns leaning against the base of the holiest of Jewish sites.

Just those two scenes alone, on either side of the scroll that could also be seen from the inside as an open-to-the-sky chimney stack, rivets the present day observer to the ground. 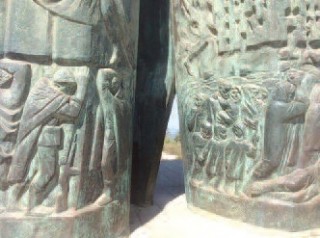 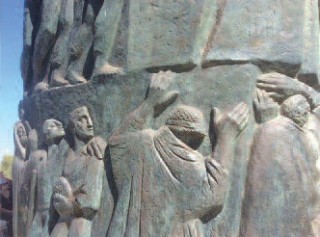 A deep sadness wells up inside as one is drawn in by the fear and anguish on the small faces of Korczak's charges and an upsurge of even deeper appreciation of the bravery of the teacher is truly brought home.But, with a slight turn of the head to the opposite portion of the scroll, forged forever in bronze, we observe proud Israeli soldiers - overcome with emotion – as they kiss and hug the Western Wall minutes after conquering the Old City of Jerusalem in 1967.

The constant emotional swings, from horror to immense pride, just about sum up an hour or so spent walking around the open history book on a scroll that is Rapoport's startlingly impressive history of the Jewish people.

Another of Rapoport's life-like and powerful bronze creations, a memorial to those who died in the Warsaw Ghetto Uprising, can be seen at the Yad Vashem Holocaust Museum.The chillingly realistic sculpture depicts Mordecai Anielewicz, a leader of the uprising, and a handful of his heroic fighters – most of whom perished in the 1943 uprising.

Every year Anielewicz and the six ghetto fighters depicted in the work have an almost stronger- than-life presence as they stand defiantly high in the background whilst Israel's leaders address a large on-site audience and millions of Israelis watching the Holocaust Day ceremony being broadcast from the main Yad Vashem square.

Another of Rapoport's bronze sculptures of Anielewicz can be found at Kibbutz Yad Mordecai where annually a ceremony is also held to remember him and all the other heroes - men, women and teenagers - who bravely fought the Nazis in the streets and sewers of the Warsaw Ghetto.

Born in 1920 in Warsaw, Rapoport also sculpted the Monument to the Ghetto Heroes commemorating the first Warsaw Ghetto Uprising in 1943, which stands in present times in a square opposite the Polin Museum in the Polish capital.

In the forecourt of the Jerusalem Hills Scrolls of Fire memorial stands a testament to Nathan Rapoport's great works of art in Israel, Poland and elsewhere.A marble plaque embedded in a large rock reads in Hebrew, French and English: "My words have been made of bronze and stone, they are silent, heavy and longstanding."