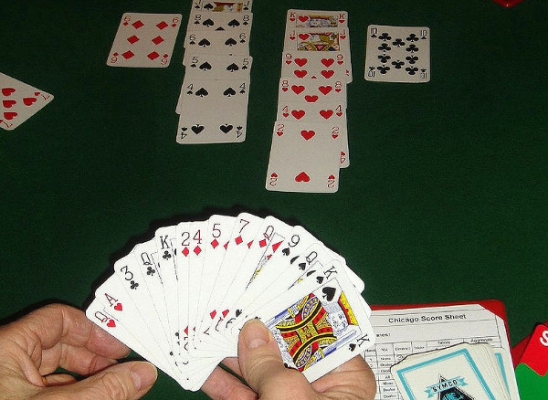 There are few things more satisfying in bridge than bidding and making a slam, be it a small slam or, even more pleasing, a grand slam. On the other hand, one doesn't want to bid, say 6NT, only to suffer the indignity of having the opponents cash 2 Aces to defeat the contact from the outset. In the early days of contract bridge, in order to avoid the latter situation, Eadsley Blackwood came up with the idea of using the bid of 4NT to ask the question: "Partner, how many aces do you have?" with partner responding 5♣, 5♦, 5♥, 5♠ or 5 NT to show zero, one, two, three or four aces, respectively. This so-named Blackwood convention became a basic tool of the game as it became popularized in the 1950s.

With the development of bidding techniques, a variant of the basic convention, known as Roman Keycard Blackwood (RKCB), introduced in the 60's by the famous Italian Blue Team, has become increasingly popular. RKCB was born of the observation that slams missing key cards like the king, or even the queen of trumps, not only aces, may be pretty dicey too. Essentially, RKCB counts the king of trumps as a fifth "ace" or keycard and NT asks the question: "Partner, how many of the FIVE keycards do you have?" The responses are:

A return to the trump suit at any level by the 4NT initiator is a sign-off while 5NT requests responder to bid any king he holds other than the king of trumps, starting with the lowest-ranked king he has. Responder's bid of the trump suit would show no outside king.

One difficulty with RKCB is that the trump suit may not have been explicitly or implicitly agreed upon when the 4NT bid is made. In this case the last bid suit is taken to be the "trump suit".

Consider the following hand in which your partner deals and bids 1.

You bid 1♠ and partner rebids 3♦. When you now jump to 4NT, partner will respond as though you had agreed on diamonds, the last bid suit, and bid accordingly. Suppose he bids 5 showing 3 keycards – these must be ♦A, ♦K and ♣A as you have the other two aces. When you now bid 5♥, asking about ♦Q, he bids 6♣, showing he has that card plus the ♣K. You can count 13 tricks: 5 diamonds, 5 spades, a heart and 2 clubs so you bid the cold grand slam of 7NT.

I have outlined the basic bids of the RKCB convention. There are more complicated variants which include showing voids in addition to keycards, reversing the meanings of the 5♣ and 5♦, and others. What I have covered in this article, though, is pretty useful and workable, as is, and not overly complicated for you and your partner to agree upon.

However, you decide to use the convention, I strongly recommend you do so. It will open up a new dimension to your slam bidding. Good luck.