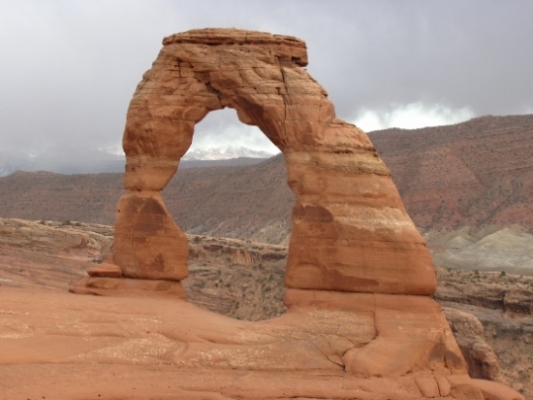 Those red, red rocks ... a delicate arch and (below) at Monument Valley. Story and Photos by Susan de la Fuente

Our nine-week coast-to-coast U.S. trip began in Washington DC with a morning in the Holocaust Memorial Museum. The museum houses many exhibitions, including recent instances of global genocide, and involves visitors in the atmosphere of the Hitler years in a personalized way. For example, the feelings of a wartime Jewish child are successfully conveyed by the exhibit Daniel's Story, which portrays Daniel's environment and shows how normalcy gave way to trauma during the rise of Nazism. The database of Jewish victims and survivors is comprehensive.

That afternoon, we viewed some important monuments during an energetic walk to the National Mall. Afterwards, we went to an upscale shopping mall to buy insoles for aching feet, and then to a Jewish Community Center for a good dinner.

Though our subsequent October sightseeing was limited by the 2013 government shutdown, we had leisure to stroll along the Potomac and visit nearby Georgetown and Alexandria, Va. The latter houses a Black History Museum and Freedom House Museum which describe the burgeoning slave trade of Virginia's past.

Fortunately, the US Supreme Court in downtown Washington remained open. An introductory movie and a lively courtroom lecture by an experienced docent brought the impressive building to life. Besides historical and architectural details, we learned about the court's judicial functions, its personalities, and the drama of its debates. Among the fascinating minutiae was the disclosure of a basketball court in the building, though ball playing is obviously banned during arguments. A quieter activity, yoga for women staffers, was instigated by former Justice Sandra Day O'Connor. One established ritual is the justices shaking hands with one another in the robing room, 36 handshakes in total, before they pass through the curtain into the courtroom. The overhead friezes in the chamber represent the majesty of the law, and include sculptures of the Egyptian king Menes, the Babylonian king Hammurabi, Moses and Solomon.

After visiting Virginia, Orlando, Florida and San Antonio, Texas, we took the train to Phoenix, Arizona to stock up on kosher food and rent a car. Overnighting at Tuba City, an Indian reservation in northern Arizona, we were amused to find the Navajos an hour ahead of other state locations, which kept standard time. As the sun sank over the distant vista of the Grand Canyon's northern rim, we looked forward to exploring Navajo territory.

Next day found us in Monument Valley, near the Utah border. This was our first glimpse of those fascinating red rocks, formed by erosion into mesas and buttes. Hematite, the reddish iron oxide cement which bound quartz grains of sand into sandstone long ago, is the source of the red hues. At Monument Valley, we took a circular drive to see the monuments. As we bumped along the unpaved route in low gear, we longed to exchange our car for a rugged jeep. That afternoon, we hiked the Wild Cat trail down to the valley floor, a 3.2 mile, 1¾ hour walk through red sand and shale, past juniper trees, small prickly bushes, broom and petrified trees, treading the silt of dry river beds and marveling at turquoise stones underfoot.

We overnighted in Gouldings Lodge against a background of huge red rocks. Here nostalgia prevails. The movie Yellow Ribbon, starring John Wayne and filmed in the valley below, was an appropriate evening entertainment. Before leaving the next day we saw the original log cabin shown in the movie, once the Gouldings' home and a thriving trading post. Artistic photographs by wildlife photographer David Muench adorn its walls, while outside stands a stage coach with wooden wheels.

Our next goal was southern Utah and its national parks. After passing the Mexican Hat rock formation we had a hair-raising drive from the San Juan River along the Moki Dugway. The three miles of steep narrow gravel road afforded splendid views. On the plateau above, snow-capped mountains appeared on the horizon. Natural Bridges Park, some 6,500 feet above sea level, was our destination.

The $10 senior pass which provides admission to all national parks is an outstanding bargain. Usually in early November Visitors' Centers are still open to provide maps and ranger guidance concerning suitable trails. A short video informed us how the three sandstone bridges and two deep canyons at Natural Bridges were eventually formed by intermittent streams. A paved, nine-mile loop road enables access to the bridges near overlook points. We descended to Sipapu Bridge in the valley – the second largest such bridge in the world – but viewed others from the road that short Friday. According to Hopi Indians, a sipapu is a portal through which souls pass to the spirit world. 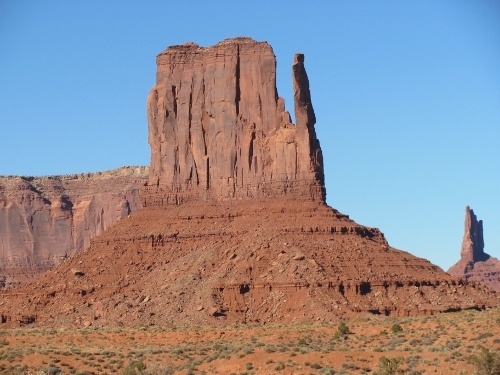 After a quiet Shabbat in Moab, we spent Sunday at Arches National Park, a magnificent area five miles northwards. This park was still thronged with tourists viewing wondrous red sandstone formations such as Balanced Rock, the Windows, and Devils Garden. We enjoyed an easy camaraderie with them, including seniors driving trailers. One summed up his retirement as "the best job I ever ha"d. Though a vivid blue scrub-jay visited our picnic table, feeding wild life is forbidden lest it become aggressive and dangerous.

Staying on marked paths is another environmental duty. Our final two-hour hike to the Delicate Arch was mainly uphill over an expanse of slickrock towards a final rock ledge of some 200 yards and yielded stunning views. Small piles of rocks or rock cairns point out the way. The arch's delicate structure resulted from the effects of erosion over the centuries. Though dark clouds added to the drama, the rain held off. On the way back we saw Wolfe's Ranch, the lone outpost of a pioneer family in the late 1800s.

We spent one day at the vast Capitol Reef National Park, distinguished by its white rock domes (said to resemble the US Capitol) and limestone hills layered with mint green, chocolate and ochre colored rock. In the river valley is ancient rock art, remnants of the Fremont Indian culture, contrasting with nineteenth century orchards in nearby Fruita. We took the Hickman Bridge trail to view a massive sandstone bridge, 133 feet long and 125 feet high.

We then headed for Bryce Canyon in south-west Utah, encountering ice and snow in shaded areas, and higher up on the Bristlecone Loop trail with its ancient pines. The gnarled, stunted juniper trees on the hills are many centuries old. Centuries of erosion aided by heavy summer rains have created several towering amphitheater-like structures with spectacularly carved rock formations, including the whimsically named hoodoos or goblins in the north section. These fragile rock spires resemble totem poles. Park colors are delicate with pink limestone predominating, striped with contrasting vanilla. Several scenic trails which begin at Sunrise Point, such as the Navajo Loop Trail and the Queen's Garden Trail, provide wonderful views of the area.

The next day, en route to Cedar City, Utah we hiked around Kodachrome Basin State Park, which has cylindrical chimneys of varying heights called sand pipes. We were suitably elated when we finally reached Panorama Point on the 2.9 mile trail. We also had brief but stunning glimpses of the Red Canyon from Scenic Route 12. Our final destination that week was Zion National Park, where we admired the beautiful Virgin River and climbed up to the Emerald Pools via the Kayenta Trail. We spent Friday in Kolub Canyon, the northern section of the park, where we forded Taylor Creek's many small streams aided by hiking sticks. After that five-mile exertion we relaxed over Shabbat in Cedar City 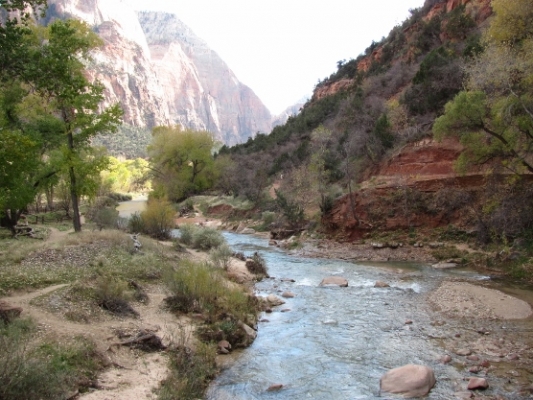 A river runs through it ... the natural beauty of the Virgin River

After Shabbat we attended a memorable concert by the orchestra of southern Utah playing the outstanding Canyon Concerto, a contemporary work by Keith Bradshaw, featuring guest percussionist Lynn Vartan. Each movement portrays one park and its rock formations, with a Bryce Canyon hoodoos dance, goblins cavorting in Goblin Valley, the chatter of Three Gossips from Arches and majestic input from Zion's Court of the Patriarchs. Appropriate images of these wonderful monuments appeared on the walls.

After a long drive across Nevada on November 10 we reached California's immense Yosemite Park, whose upper level fortunately remained open before the winter closure. Leaving the deep blue lakes, rivers and lush vegetation, we drove to the central valley, then hiked uphill to Vernal Falls. The next day we walked through the towering giant sequoia trees of Mariposa, before driving many kilometers to lofty Olmsted Point and the famed Glacier Point lookout.

After a weekend in San Francisco, we spent three days doing the beautiful 500-mile drive along the California coast to Los Angeles, viewing unspoiled landscapes and pretty towns. Our trip included state parks bordering the deep blue Pacific, the rugged Big Sur coastline and some elegant vistas at Hearst castle near San Simeon.

After stays in Los Angeles and San Diego, our tour was due to finish with a return flight from Las Vegas to New York. From Vegas we took an organized tour to Grand Canyon West, Hualapai Indian territory. Eagle Point has a skywalk or glass bridge 4,000 feet (1200 m) above the canyon floor and the rust-red Colorado River. En route we passed oddly shaped Joshua trees, a variety of the yucca plant. As the tree's name is reminiscent of Joshua waving his arms towards the Promised Land, we received an appropriate reminder that it was time to return home.