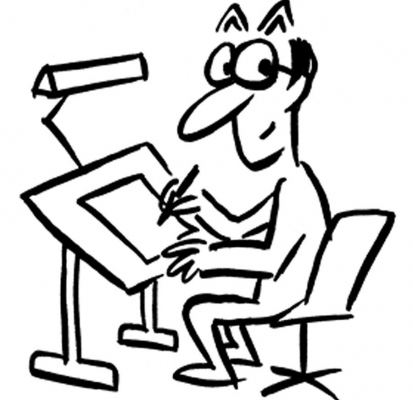 Readers may have noticed the humorous cartoons I introduced here in recent magazines, as well as a Hanukkah book review called Too Many Latkes, all done by Richard Codor.

Enthusiastic responses to his work elicited an interview request during his visit to Israel. With great pleasure I bring you the background info on this well-known Illustrator.
Richard was born in Wilmington, Delaware to a very Zionistic couple: Ben Codor, who devoted his life to getting neighborhoods established in Israel – such as Jesse Cohen in Holon and Tirat Hacarmel. He shortened Chodorov to Codor on arriving in the US from Russia. Voila, our cousin.

His Mom Hilda was a wonderfully talented painter and student of French who worked for the local synagogue, and his only sister Janet became a regional director for the FDA in San Francisco.

"I did my first storyboard when I was 8 – a storyboard of a cowboy and girl, a bad guy in black with a mustache who chased them with a bomb. Which exploded under him. I still have that strip on record!

At 11, I saw my first Mad Magazine in Baltimore and was hooked forever.

I tried out any cartoon style and TV animations that I saw, as well as copying Cezanne and Matisse.

I copied cartoons from everywhere … all through high school, where I was the school cartoonist, and at the University of Delaware, where I studied Graphic Arts.

My mom was happy with me doodling. In college I learned the classics and etching. I liked painting but had no interest in oil painting.

I followed a friend and volunteered on Kibbutz Yotveta. The Kibbutz wanted to open an animation studio so they sent me to check out the TV station in Romema. I went in, met Dudu Geva, Yossi Abulafia and other talents and never came back.

In Israel, Dudu Geva and I worked together about eight years in Israel TV.

Dudu became the father of underground comics in Israel.

Nikui Rosh was my first program, then Sammy and Susu, a long running children's show in Arabic – which was a first. Rosh Kruv and Telly Pelly – a bookworm puppet that ate his way through books, which I liked very much. The most popular animation I did was for Ritsh Ratsh.

Dudu came up with a movie idea – Kochav Katan, which I animated and also played the lead. I could have doubled for Groucho Marx then. We also did a series of animated Arik Einstein songs.

Together we did several animated films and also created this comic strip for a monthly student magazine named Lillit called "Super Golda" which had an excellent reputation, but offended Golda. So Golda shut us down.

The culmination of this period was our collaboration on Zu Eretz Zu, a satirical look at all of Israeli culture which was a best seller and is still a classic today."

Our unintentional Zionist joined the IDF in 1978, although he had been classified 4F for the US. When the army saw he was useless, they allowed him to paint the walls of the officers' club. 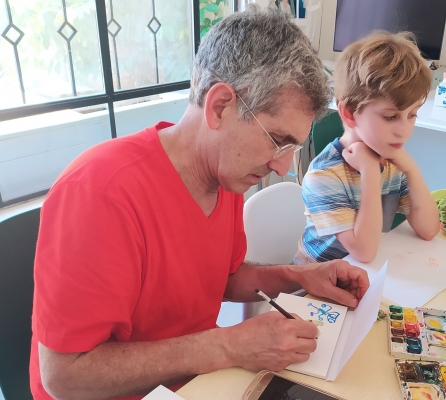 Thereafter, since Romema was a professional dead end, he took a break in New York. He was followed shortly thereafter by Liora Auerbach, a top Israeli photographer, whom he married after both found freelance work and moved into a loft in Soho. Liora's talents were indispensable and they collaborated closely on various projects. Multi-talented Tamara and Ronen, their daughter and son, completed their family.

He worked for Village Voice and other freelance illustrations, including for Hadassah Magazine and the New York Observer, as well as for Marvel at their Crazy Magazine, also doing commercial children's illustrations for them, such as Fisher Price's Little People Dictionary, My Little Pony, Pound Puppies and Strawberry Shortcake. A highlight was working for the show Alf.

Codor helped develop a young children's show called Peanut Butter and Jelly. Thereafter, at Curious Pictures he created commercials and did most of the illustrations for The Big Book of Jewish Humor by Harper and Collins.

Next, Codor co-developed the alter ego for Lizzy McGuire, the first immensely successful TV hit for the 10-14 age group, which made him a Rock Star for tweens.

Because of the success of Lizzy, he was asked to do the storyboard for Piper in the movie Robots which was a very intense "Rupert Murdoch" Hollywood experience. Everything was a battle with political infighting. As a result, of the six movies he worked on, three were never shown. Enough was enough. He'd had it with Hollywood. 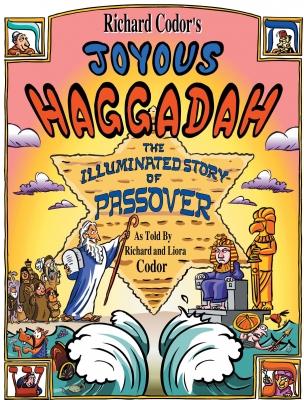 Codor's No. 1 Haggadah on Amazon

So Liora asked him what he wanted to do next and encouraged him to use material he had developed. Since self-publishing had become the rage, in 2008, after the sad demise of his sister and his mom, he decided to learn about publishing and invest in his own book. As he had developed various Passover characters over the years, he and Liora decided to do a humorous but totally kosher Joyous Haggadah with the aid of Zelda Shluker, one of the foremost book editors whom he knew from Hadassah Magazine, where he had contributed for years. She became a priceless mentor for him.

When the Haggadah came out, it was an immediate best seller, despite the financial crash of 2008, and is a perennial best seller on Amazon and Barnes and Noble. (It sells for 1400 rupees in India.)

After a career spent doing every kind of cartooning, Richard feels This Is His Beginning. Oh, and he loves the new design of the ESRA Magazine.