Revealed: The dark side of artist Chagall 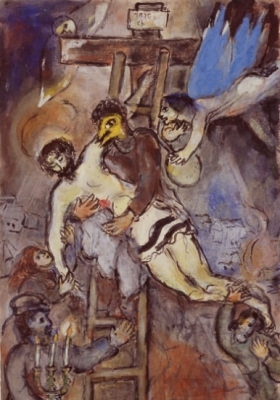 Descent from the Cross

The Chagall exhibit at the Jewish Museum in New York is unlike any other Chagall exhibit one is likely ever to see. Its paintings are the dark flip side of Chagall's sunny work that fills the world's museums, galleries, synagogues, and opera houses.

There is nothing of the borderline sentimental, the blatantly sweet, or the bourgeois buoyancy with which the great opus of his work is infused.

In Chagall: Love, War and Exile, we meet the dark Marc Chagall. A Chagall of destruction, discord, and dissonance. A Chagall of canvasses steeped in sticky crimson blood, of eviscerated beasts, of animals howling downwards towards death. We see burning villages, abandoned cottages, despondent refugees, ravaged landscapes lacking vegetation or habitation. His bleak 1944 The Crucified from the collection of the Israel Museum pictures a post annihilation village of slaughtered women and children, an old man's corpse upon the snow and a series of crucified figures nailed to wooden posts. 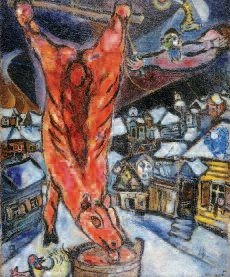 Just as his subjects darkened, so did his vibrant palette. Azure blue and rosy pink were replaced with colors hitherto foreign to Chagall canvasses: charcoal, ochre, olive, crimson.

One image above all stands out in Chagall's bleak wartime pictures. The image of a crucified Jesus is met over and over again: Jesus carries the cross; a splayed Jesus hangs on the cross; a limp ghostly white Jesus descends from the cross. A lifeless Jesus embraced by a ghostly Jewish bride hangs suspended over an empty village, his loincloth a tallit. The repeated Jesus Christ figures which Chagall painted in the 1940's, symbol for his martyred people, form some of the strongest canvasses in his oeuvre. 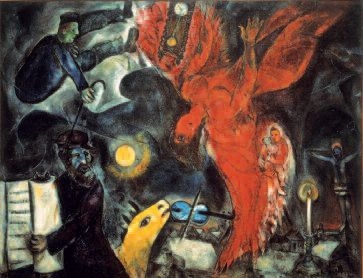 The Fall of the Angel

Chagall, born in Czarist Belarus and raised in an Orthodox home, was an established émigré artist living in Paris at the outbreak of World War Two. Although originally a supporter of the Russian Revolution, he moved to France in 1923. His canvasses presented nostalgic themes of the shtetl, Eastern European religious life, and the Yiddish culture he had left behind.

Already a popular and famous artist, Chagall was in a better position than many other Jews, French and foreign, living in France during the Nazi conquest. Although visas to the United States were almost impossible to obtain, American journalist Varian Fry and his clandestine rescue operation secured one for Chagall and his wife. The couple arrived in New York in 1941. His canvasses were saved as well.

Unlike many other refugee artists and intellectuals, Chagall never integrated into America. He spoke French and Yiddish, and did not make great efforts to mingle. Instead, he expressed his deracination and pain through painting. 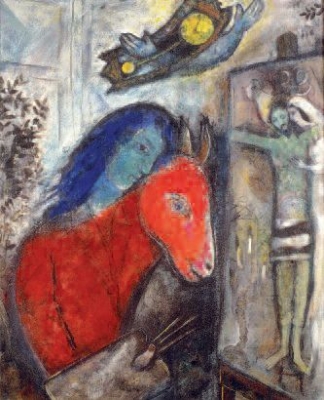 Self portrait with clock by Chagall

The canvasses at the Jewish Museum are gathered from major collections worldwide. They testify to the anguish and guilt of a European Jewish refugee living in safety in America during the black days of the war, looking eastwards with growing horror and despair to the annihilation of his friends and family. The exhibit displays a quote translated from the Yiddish, written by Chagall about fellow Jewish artists trapped in Europe: "I see them trudging alone in rags, barefoot on mute roads. The brothers of Israels, Pissarro and Modigliani, our brothers – pulled with ropes by the sons of Durer, Cranach and Holbein – to death in the crematoria."

Chagall's wife died suddenly while they were in America, exacerbating his loneliness. Canvasses express grief at her loss as well, and later his renewed joy upon finding a new romantic liaison. After the war Chagall moved back to France, where he resumed his characteristic style of exuberant optimism.

Chagall's striking wartimes canvasses give the art lover a deeper understanding and appreciation of little known depths of this major 20th century artist.

Chagall: Love, War and Exile exhibition at The Jewish Museum, New York is open until February 2, 2014.