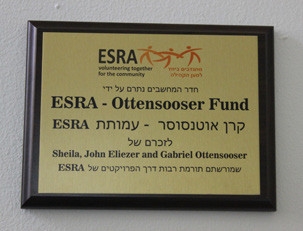 As the saying goes, "No one gets out of this world alive". But the big question is, what will we leave behind? What have we contributed? Has our being here made any difference, and how will we be remembered?

There are those who have found a single answer to all of these questions – a posthumous endowment to ESRA for the continued improvement of people's lives. This is the story of the Ottensooser family's legacy.

Eliezer Ottensooser, together with his parents and siblings, wisely departed Germany prior to WW II, for Palestine. He met his wife Sheila, an English woman who worked at the Rothschild Bank in London, when he was working as a purser on the Israeli Zim shipping line. We know this from veteran ESRA member, Adele Rubin. She and her husband Mike met Sheila and Eliezer when he was assistant manager at the Sharon Hotel in Herzliya Pituach. The two couples became fast friends. As Sheila never mastered Hebrew, she was very pleased when Adele introduced her to ESRA, where she felt at home, enjoyed activities and reading the ESRA magazine. The two couples continued their friendship throughout life's experiences, becoming parents almost at the same time, and their sons became friends as well.

After Eliezer's failed attempt to establish a chain of pancake houses in Israel, he and his family moved to England where he was very successful at establishing an insurance brokerage house. Sadly, their son died of cancer at far too early an age. When Eliezer retired, he and Sheila moved to Cannes. They maintained their friendship with the Rubins, and Adele made sure that Sheila continued to receive her ESRA magazines, no matter where she lived.

Through Adele and ESRA magazine, Eliezer and Sheila were aware of the wonderful projects ESRA was running to the benefit of weaker elements of society. Clearly, ESRA was changing lives for the better, and even whole communities. The Ottensooser's decided to leave a legacy to ESRA to help ensure that it could continue its good work.

Both Sheila and Eliezer have since departed this world, but they are not forgotten. A plaque was ceremoniously unveiled at the Netanya Heftzibah Community Center, in honor of the Computer Room thanks to the Ottensooser Fund. Their legacy also goes toward ESRA projects, including Students Build a Community (SBC), which enables financially stressed students to complete their studies while tutoring children and changing the community. The students are very grateful to their benefactors, and are able to look forward to a better future, while being excellent role models to the children they mentor.

One doesn't have to be a millionaire to leave a legacy. A little bit of help goes a long way to those in need. An endowment in a will, a legacy - these are ways of continuing to make a difference. And ESRA will always remember.

See also: The Legacy of Giving by Baruch Tanaman https://magazine.esra.org.il/esramagazine/popular-categories/all-articles/entry/a-legacy-of-giving.html