This article is reprinted from Moment Magazine - momentmag.com/half-a-century-later-remembering-two-fallen-comrades/

In the weeks immediately following the 1967 Six-Day War, I was part of a contingent of international civilian volunteers — mostly Jews — sent from Jerusalem to El-Arish, in Egyptian northern Sinai. It was a mission that marked my life indelibly and left me with a debt it has taken more than half a century to repay.

Our job was to salvage abandoned Egyptian tanks, trucks and armored personnel carriers. Supervised by the Israeli army, we towed or dragged the vehicles in from the desert — many barely used — and shipped them by rail to Israel. It was sobering work; the sands were littered with the blackened, rotting bodies of Egyptian soldiers, some in roped-off minefields, where they could not be safely recovered. 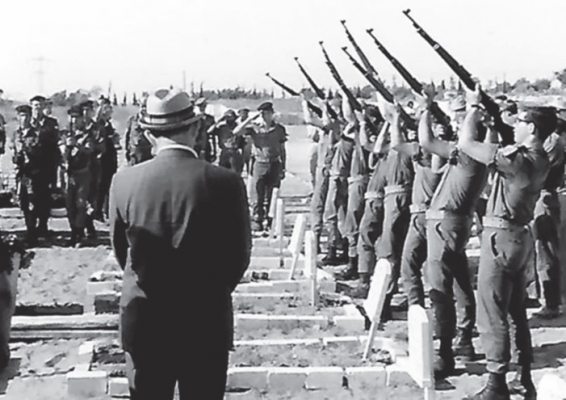 It was also dangerous work. The following summer, two of our Australian friends, Max Haber and Norman Rosenbaum, both in their early 20s, were killed in separate accidents. The Melbourne natives were buried a month apart, Max in the military cemetery in the Ramat Hasharon district of Tel Aviv, Norman in a civilian cemetery in Holon in the Gush Dan district, south of Tel Aviv.

Since that time, to my knowledge, none of our group of volunteers has been to Australia, or ever reached out to the boys' families. So when my wife and I planned a trip in late 2017 to Melbourne to visit our daughter, my thoughts turned back to the two young men. My first impression of the Aussies upon meeting them in El-Arish had been that, for such obviously close friends, they were an odd pair. Norman had a dark, sardonic wit, and was as taciturn as Max, a loud and boisterous redhead, was exuberant.

In the months before leaving for Australia, I reached out to the Melbourne Jewish community, in particular to members of the local branch of the Australian Jewish Genealogical Society. They helped me locate each of the young men's surviving brothers. One wrote back, asking for any photos or recollections from that time, including the details of the two friends' deaths, which had never been made entirely clear to the brothers.

So I contacted those volunteers I still corresponded with in the United States, Argentina, Britain and Israel, and told them I planned to meet with Max's and Norman's families. I asked if anyone had photos or memories of the two we could share.

My English friend, Ian Braidman, had bunked with the Aussies in the abandoned U.N. peacekeepers' camp where we were based. Max and Norman had referred to him by their countrymen's affectionate epithet for all Brits — "pommy bastard" — and had expanded their tight duo to a trio to include him. So Ian was the first to write the surviving brothers about the two volunteers, including photos of them and some of Max's funeral, which had been delayed, in part so that his parents could attend.

"My reminiscences of them have not dulled with the passage of time, and my time in El-Arish is epitomized by this memory," he wrote. "They were at the center of all the pranks and fun we got up to and it was a privilege to have known them."

Ian's recollection of that time provoked my own. I was laid up with dysentery and dehydration, so I had missed Max's funeral, which was attended by a senior Israeli Army officer. Ian, who had attended the service, sent along his account of Max's death and funeral, which was going to be part of a collection of volunteer essays about our time in El-Arish in 1967: "Max Haber was killed when managing the loading of a damaged Egyptian tank on a large flatbed truck — the tank turret was secured by a metal cable which suddenly came loose, with the heavy armored gun turret suddenly swinging freely. It slapped Max across the chest, crushing some bones. He died on the way to the hospital. Max was given a military funeral with full honors, and I tearfully gave the eulogy. His best friend Norm was too distressed to give it. This tragedy hit us all hard and the levity and bravado, previously prevalent, disappeared as the reality of the danger of our operation hit home."

In my long conversations with Norman in the weeks following Max's death, often late at night, I recall he was, by turns, morose, resigned and deeply reflective about what had happened. Before my wife and I left for Australia, I shared my own experience with Max's and Norm's brothers in emails.

In August 1967, with my money running low and the date of my return charter from London to the United States approaching, I had to make a decision to either stay with my new friends and comrades or return to the States — a decision I still ponder. Work at the El-Arish camp was winding down, and as I departed there was talk of Norman and the other remaining volunteers moving further west, nearer the Suez Canal, to retrieve more Egyptian armor and ammunition.

I returned to Duke University, and I wrote frequently to my volunteer friends in Israel and Sinai, until a letter arrived telling me that Norman had been killed in an accidental explosion while recovering munitions. I was usually less daring than Norman and the others, and I thought that maybe the accident might not have happened if I had stayed on with them, and influenced them with my caution. A few days later, through the vagaries of the postal system, I received a chatty letter from Norman. After that, I unraveled, leaving Duke at midterm.

In Australia, I waited until I recovered from jet lag to reach out to Alex Haber, Max's younger brother, and Victor Rosenbaum, Norman's older brother. I had hoped to meet with them together, but Victor was in the hospital recovering from complicated orthopedic surgery. So with my wife and daughter, I met Alex on a sunny Sunday afternoon at an outdoor café in the Malvern section of Melbourne. I brought as many photos as I could find, and began an easy conversation about our time in El-Arish.

Alex said he was glad we were meeting. "I've been wondering for many, many years," he said, "about Max's life in El-Arish. I couldn't find anyone from that time."

When I finished with my recollections, Alex, subdued, shared in the story of how Max ended up in El-Arish.

Just after the Six-Day War began, a mass youth meeting was held at Beth Weizmann Community Center, on St. Kilda Road in Melbourne, where many Jews then lived. It was a very foggy night, but about a thousand young people showed up at the center, which has a strong Zionist orientation. After four hours of discussion, about 50 young people, including Max and Norman, volunteered to go.

None of those who knew the young men were surprised by their action, Alex told me. Max said simply, "I'm going to Israel," though it would be his first time out of the country. Nor were people surprised that they would both go together. "They were like brothers," Alex said.

Alex was still hurt that the news of his brother's death came in a phone call from a local Zionist organization, rather than in a personal visit. Like me, they received a letter from Norman, one of only two he wrote, which arrived after they learned of his death. 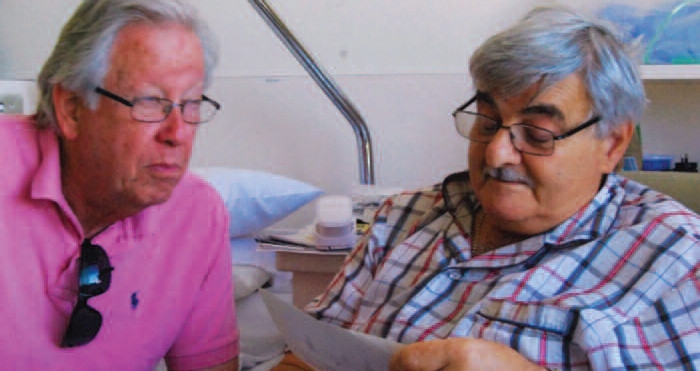 Mark and Victor Rosenbaum in Victor’s hospital room in 2017, looking at photos of Norman Rosenbaum

A few weeks after my meeting with Alex, my wife and I met Victor Rosenbaum in his room on the second floor of Cabrini Catholic Hospital. When I first emailed him from the United States, he admitted to mixed feelings about returning to the subject of his brother: "I was so pleased to hear from you," he wrote back. "I was also saddened, naturally."

By this time, the tension had eased. Victor recalled that Norman didn't ask his parents for permission to go to Israel. "He didn't have to. We were that kind of family. In any case," he said, "to him, it was a great adventure."

As it happened, Norman's parents were visiting Israel at the time of his accident and had seen him just days before. They read about his death in the paper and were able to attend his funeral. 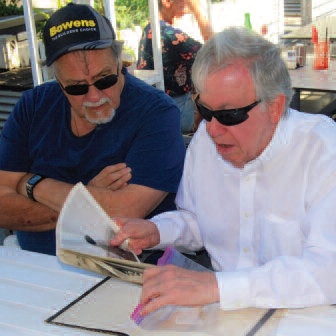 October 2017:Alex Haber viewing photos of his brother with Mark

Not surprisingly, both surviving brothers said their parents were never the same after their sons' deaths. Before the 1979 peace treaty that returned the Sinai to Egypt, Victor had visited the whitewashed barracks of the El-Arish base, which left him reflective about what had happened. Since then, he has been to Norman's grave many times.

"I do think of Norman often," Victor told me. "I think of him on holidays, at family events and, of course, when I say kaddish for him. If I meet any of his school friends, memories return. And when I think about Norman, Max is in my thoughts."

Alex Haber memorialized Max with a Torah cover at Congregation Shira Hadasha on Balaclava Road in the Caulfield neighborhood of Melbourne, and with a plaque on his family's headstone. 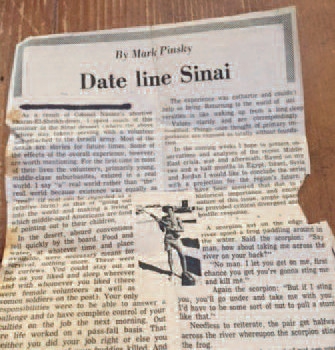 There was a chilling postscript to my visit. Victor Rosenbaum told me that shortly after our meeting, he came across Norman's wallet in a drawer. In it was an article I had written about El-Arish for the Duke University Chronicle, as well as my old address written on a scrap of paper.

From the perspective of more than half a century, the spring and summer of 1967 seem like a much simpler time. Like many idealistic Jews from around the world, I felt Israel needed me — us — and so we came. Nothing in my life prepared me for what happened in the desert. More than anything, what that summer burned into my psyche is the universality of the Jewish people. Like many who came, and many others who tried to, we hoped and believed that the Six-Day War victory would result in a just and lasting peace and a secure Israel. Clearly, things didn't work out that way, for reasons too tedious and repetitive to get into here. I realized the situation was complex, and that there was plenty of blame to go around. So when I was in Australia, I avoided the subject when I visited the boys' brothers. I had done what I needed to do — to close the circle with our two friends who died in the desert.

Mark I. Pinsky is an Orlando-based journalist and author.