Putting our Quiz Brains into Gear 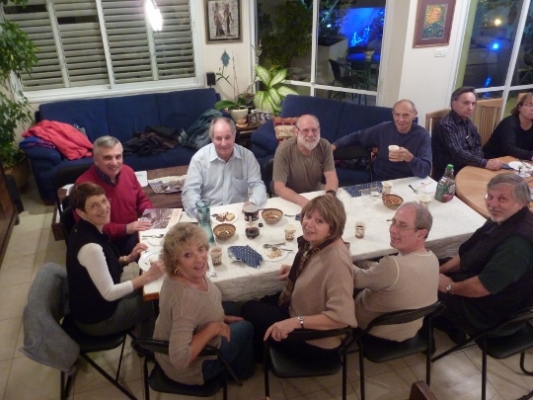 Who could believe that a year had passed so quickly. Last year we had 13 venues and this year 20. With nearly 400 people taking part over the length and breadth of the country from Naharyia down to Eilat, the evening was aimed at bringing all of ESRA together,and that's exactly what we achieved.

At QUIZ HQ David Shulman and I were working feverishly up to the break collating all the results so that in the interval we could give the positions of each team. Rehovot and Karmiel were joint leaders and Tiberias and Hunters of Raanana on their tail. Tension was mounting for the start of the second round. Each team was pulling together to find the eventual winner.

Question writers, Ralph Barnett and Brian Fink had set many varied, interesting and funny questions which kept everyone entertained, especially the music questions with many of the quizmasters singing the songs to their team.

The World Zionist Organization was also involved in the evening. They asked a number of questions right at the end of the quiz - the idea being that a family of four people will attend the Israeli National quiz on Yom Haatzmaut. We had a number of people who correctly answered these questions with a score of 100%, and some of them will have the opportunity of appearing on Israeli National television on Yom Haatzmaut. That decision will be made by the WZO. The family that hopefully appears will be representing ESRA.

It was a night to remember as many of the comments received prove that our contestants and hosts can't wait for next year's quiz.

Congratulations to hosts, Adele and Michael Hunter (Raanana) and their team for winning this year's quiz.

Glenis Bertfield is the ESRA Quiz initiator and organizer and. She is a member of ESRA's Executive, the regional chair for the central region, and coordinator of the Befrienders program. 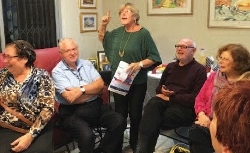 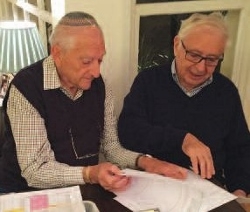 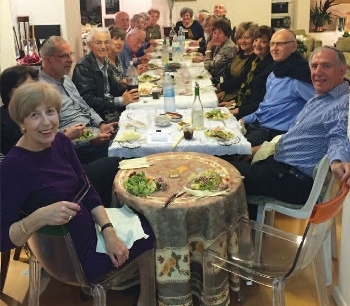 Comments from some of the teams

Well done Glenis we had lots of fun in Hanniel. Sorry we lost, but are pleased for Adele Hunter's team in Raanana. Hope you made lots of money. Please thank all those concerned with organizing the Quiz from us. Looking forward to next year's challenge.

Overall – we did very well with only 12 people – in fact the scores were close. Thanks for everything. Joseph Beenstock – Ramat Aviv

I am very sorry but I counted round 8 as 10, whereas we got them all right and it should have been 12. Therefore our total was 75 and not 73. My only excuse is that I am an accountant. Well done everyone.

We had a lot of fun and were amazed that we won. The most important thing is that it was a fun evening for everyone.

We signed up a new member, and collected good money. The Quiz was fun and well run,and honest. Thanks to Glenis and all her helpers. Our refreshments went on all night, and there was very little left over.

Congratulations from Eilat to the Hunter-Raanana team and to you Glenis for all your hard work. We had a very enjoyable evening and are delighted that one of our participants, Siri Jones-Rosen, is going through for the WZO competition. We ended the evening with lovely singing from some of our participants. Till next year!

A very good evening. A lot of hard work but the results were good.

At times the noise level almost prevented us from hearing each other, or Elaine, our quiz mistress.

Let's do it again next year. We have 52 weeks to train.

It was a fun evening enjoyed by all. Col hacavod for organizing this again.

A great time was had by all, even if we didn't win. If all the branches had as much fun as we did, you have an amazing success for years to come! It was great. ‎WWell done!

Our team, hosted by the Eisners, was very proud of its achievement but annoyed at itself for missin g the trick Equatorial Guinea question (and especially at Brian Fink who had written the question but, poker-faced, didn't give the answer away!). Everyone contributed goodies for a pot-luck supper, and Carolyn's apple cake recipe was eagerly shared.

Thanks for all of the hard work. We all had an enjoyable evening and raised money for a good cause. Even sold some raffle books and reminded some people to buy tickets for the January fundraiser. Well done, everyone who hosted and I hope you all had as much fun as we did. Congratulations to the Hunter team.

We concur in our thanks and appreciation. Glenis...it was a great and fun night for a wonderful cause...another successful and fun night. Thanks for everything.

An atmosphere of excitement and anticipation greeted us, along with the aroma of fresh pizza, as we stepped into the parlor of Naomi and Yossi Aharoni who hosted the quiz night in Rishon Lezion. I don't know how many of us 19 folks are trivia fans, but a few are notorious addicts who don't let any trivia quiz, in whatever media, escape their notice. This doesn't mean we necessarily remember all the esoteric data that comes our way. I, for one, draw a total blank when it comes to local politics or to cities other than my favorite world capitals. But ask me who composed the score for Coppelia, and I'll answer "Leo Delibes" before you can bat an eye.

And so it goes. Some questions seemed obvious, at least to old fogies like us, such as "Here's looking at you, kid"; others drew a baffled silence —e.g., Which is the northernmost of Japan's four main islands? (A) Honshu (B) Hokkaido (C) Kyushu (D) Shikoku. Yet other questions provoked twenty different suggestions and opinions, like this one: "Which one of the following countries is NOT bisected by the equator?". You should have seen us squinting, brows furrowed, trying to imagine the globe or a flat world map, with the equator and country names conspicuously displayed.

Our quizmaster, David Scott, did a fine job of delivering the questions with aplomb and the perfect elocution of a professional non-Israeli newscaster. As required, he maintained an enviable poker-face, that once in a while gave way to an enigmatic smile which, exasperatingly, gave nothing away.

The job I do not envy is that of Captain of each round – a role proposed by David. The Captain was to listen to all non-unanimous answers and to decide which was most likely correct and then to present it to our quizmaster as our final answer. I suppose if you are in your element, you can separate the wheat from the chaff and make the call quite confidently. But when some guys are confident that "Hello, young lovers" is from Musical A and some dolls think it's from Musical B, whereas all I am sure of is that "Moses supposes his toeses are roses" – then you're not much good as Captain and you feel you're to blame if your ship sinks.

With thanks to Janet who organized, Naomi who hosted, David who MC'd, and all who prepared, helped, took part and had a good laugh and a jolly good time.