Portrait of The Artist 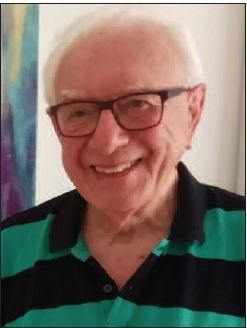 How painting as a hobby suddenly took off for Marvin Turk who has works on display in Israel and the U.S.

Some months ago, we found ourselves seated next to a couple new to our retirement community in the dining room. And so we met Marvin and Tova Turk, long-time residents of Ramat Hasharon, formerly of the United States. After introductions and the usual platitudes of welcoming newcomers to our midst, a natural progression of the conversation was "And what did you do in your working life here?"

The answer to that question opened a very interesting door for us. Marvin said that he had achieved his lifetime dreams of becoming an artist, learning to fly and living in Israel. Lunchtime in the dining room was not the place to inquire further so we agreed to meet later for an interview in his apartment where some of his art is displayed.

Marvin and Tova both grew up in Cincinnati, Ohio, in a close, social Jewish community. Nevertheless they experienced much anti-Semitism. Marvin joined Betar and he later served in the Navy during WW2. Re-enlisting after the war, he was put on inactive duty during which time he completed his pilot training. By the time he was ready to come to Israel to fly, the Israeli Air Force had been established and was training its own pilots and didn't need him. 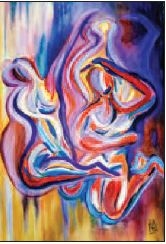 He then used the opportunity to go to university and studied Marketing, involving mass communication, accounting and statistics.

His first job was in advertising, where he was assigned to write commercials for regional advertisers. Tova, after graduating with an Arts degree, took a nursing course and followed that with teaching. They married in 1961 and moved to Florida where they lived for the first twenty-one years of their married life. Martin established himself in the building business, which put bread on the table for his family of a wife and three children. He painted in his spare time. In 1973, the Arab oil boycott hit the American economy badly and the Turks had to change their dream and plans about coming to live in Israel.

They finally made aliyah in 1981. They lived in Raanana for eight years and later settled in Ramat Hasharon, which was home for the next thirty years. Two of their children are married to Israelis but their son returned to Florida where he still lives today. Tova worked in nursing for a while, then got involved with tutoring and volunteering and has been a solid support for her husband with his career.

But what of Marvin and his very special talent?

He always dreamt of becoming an artist but it was in Florida under the professional guidance of Virginia Seitz that his career took off. He started exhibiting his work in galleries at Palm Beach in 1970. This continued in Israel where he had major exhibitions in galleries in 1983,1986, and 1989. Initially, when he first arrived in 1981, Marvin hired a studio and taught art in Herzliya. He donated his time and talent to ESRA for a while and found guiding adults of great satisfaction.

"How do you transmit to others your innate understanding of creating an idea?" I asked him. The practical answer was that the first lesson to be learned is the specifics of the material one uses. Paint is not just paint –it's very subtle. For example, when you are really serious about painting with oil paints, you need a painting medium of turpentine and linseed oil, which should be boiled first (it creates a strong odor) so having a studio is a priority. 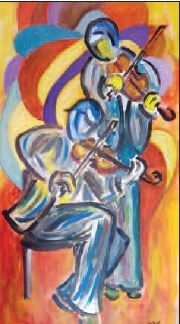 Violin and Viola in acrylic by Marvin Turk

I asked about the inspiration that creates the diversity of interpretation when painting and Marvin explained his own philosophy of teaching by guiding students not to copy from pictures and photos but rather to explore the idea of what they want to draw or paint. He seeks to stimulate dormant areas of the left brain and suggests students can turn the object that they want to draw upside down, and only then put their creative imaginative reaction down on paper. Obviously, this is an individual teacher's approach. It was only when the market for his own work grew demanding, that Marvin gave up teaching. His lifelong dream of becoming a full-time artist materialized at last.

The American market was financially more successful for him. The galleries in Israel charge a hanging fee, plus commission for sales requiring the unknown artist to finance invitations and to arrange suitable catering for the opening of such exhibitions. In the US, the galleries accept all the charges of the exhibition but demand a heavier commission on work sold which covers all the other costs with successful artists. Despite this, Marvin was invited to exhibit twice at the Tova Osman Gallery in Tel Aviv and in addition, he has sold many individual paintings privately. He has works on permanent exhibit at the museums of Boca Raton and Fort Lauderdale in the US.

The Turks apartment is filled with paintings which show a clear progression of his style and talent. Mainly of acrylic and mixed media, his work is vivid and bright with nuances of light highlighting the movement and emotion expressed. One wall is covered with a glorious scene of Tiberias, where he has captured the historical essence of the city and enveloped it in a very special ambiance. The scenes of horses galloping on the canvas are unique in color, in light and in vibrancy, as are the gentle images of ballerinas with their subtle moves. It takes just a little imagination to hear the music in his strong paintings of musicians.

Marvin has many sketchbooks filled with pencil and painted sketches of work inspired by his travels, some that have seen the light of day and many that are still in the inspirational stage. He calls the sketchbooks the "Bible of a painter." The mass of minute notations on each page is reminiscent of the similar sketches and information with which Leonardo da Vinci filled his sketchbooks.

We turn back to the walls of the apartment. There are a few striking gouache works amongst the bright paintings - a couple of which have been done by their son. It is apparent that the talent has been passed on and the apple does not fall far from the tree.

Unfortunately, today Marvin suffers from poor eyesight and he fears his painting days are over, but he is fortunate to be surrounded by examples of his success with many more in storage both here in Israel and in Florida.

I feel very privileged to have been able to enjoy viewing his own private collection, and in vicariously sharing in this artist's dreams.